The connector is available as a standard Node-RED contrib into the gallery. 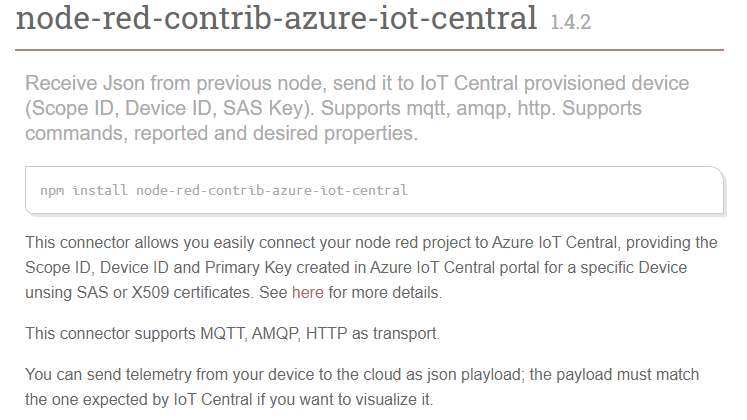 Those are scenarios currently supported:

The code of the Node-RED Connector for Azure IoT Central is available is on GitHub with some samples flows here.

I have recently done a couple of posts explaining how to use it that are  available at the following links:

Node-RED is a well know programming tool used for both prototyping and production. It comes already installed on some device. Its graphical User Interface makes it easy to develop on devices using node that simulate code like math functions, or more specific hardware oriented functions, it also enable to easily interact with sensors using the same mode of node, like for example in the image the node Sense HAT represent the Sense HAT for the Raspberry PI device.

Azure IoT Central is the SaaS solution from Microsoft, enterprise ready, scalable and secure. It's easy to use to create a real Cloud IoT solution with Dashboard, rules (for example activate an action if temperature goes over a certain threshold), analytics, the possibility to connect real and simulated device and more on that features.

If you need more examples, or features, let me know I will try to help.

@Pietro_Brambati that's great! Thanks for this!