I recently implemented a change in KEDA (currently evaluated as a potential pull request), consisting of leveraging managed identities in a more granular way, in order to adhere to the least privilege principle. While I was testing my changes, I wanted to use managed identities not only for KEDA itself but also for the Azure Functions I was using in my tests. I found out that although there are quite a few docs on the topic, none is targeting AKS:

You can find many articles showing how to grab a token from an HTTP triggered function, or using identity-based triggers, but in the context of a function hosted in Azure itself. It's not rocket science to make this work in AKS but I thought it was a good idea to recap it here as I couldn't find anything on that.

Here is a quick reminder for those who would still not know about MI. The value proposition of MI is: no password in code (or config). MI are considered best practices because the credentials used by identities are entirely managed by Azure itself. Workloads can refer to identities without the need to store credentials anywhere. On top of this, you can manage authorization with Azure AD (single pane of glasses), unlike shared access signatures and alternate authorization methods.

For MI to work in AKS, you need to enable them. You can find a comprehensive explanation on how to do this here. In a nutshell, MI works the following way in AKS: 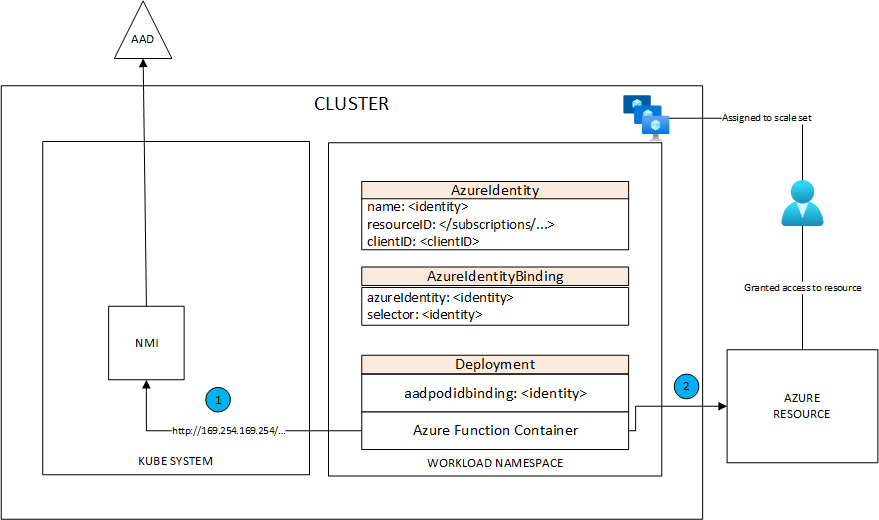 An AzureIdentity and AzureIdentityBinding resource must be defined. They target a user-assigned identity, which is attached to the cluster's VM scale set. The identity can be referred to by deployments through the aadpodbinding annotation. The function (or anything else) container makes a call to the MI system endpoint http://169..., that is intercepted by the NMI pod, which in turn, performs a call to Azure Active Directory to get an access token for the calling container.  The calling container can present the returned token to the Azure resource to gain access.

Using the right packages for the function

The packages you have to use depend on the Azure resource you interact with. In my example, I used storage account queues as well as service bus queues. To leverage MI from within the function, you must:

Note that the storage package is not really an option because Azure Functions need an Azure Storage account for the most part.

Passing the right settings to the function

Azure functions takes their configuration from the local settings and from their host's configuration. When using Azure Functions hosted on Azure, we can simply use the function app settings. In AKS, this is slightly different as we have to pass the settings through a ConfigMap or a Secret. To target both the Azure Storage account and the Service Bus, you'll have to define a secret like the following:

In the above example, I use the same storage account for my storage-queue trigger as well as the storage account that is required by functions to work. In case I was using a different storage account for the queue trigger, I'd declare an extra setting with the account name. The service bus queue-triggered function relies on the __fullyQualifiedNamespace to start listening to the service bus. Paradoxally, although I create a K8s secret, there is no secret information here, thanks to the MI.
For your reference, I'm pasting the entire YAML here:
You can see that the secret is passed to the function through the envFrom attribute. If you want to give it a test, you can use the docker image I pushed to Docker Hub.
and the code of both functions, embedded in the above docker image (nothing special):
You just need to make sure the connection string names you mention in the triggers correspond to the settings you specify in the K8s secret.
4 Likes
Like