Azure Logic Apps has grown to become the cornerstone of Azure Integration Services, an industry-leading Integration Platform as a Service (iPaaS) offering trusted by over 40,000 customers. With its innovative API-driven graphical designer and declarative workflow engine incorporating nearly 400 connectors, Logic Apps has transformed our customers’ capabilities to integrate their applications and services quickly, easily and reliably. More than 60% of the Fortune 500 depend on Logic Apps with many trusting Azure for their most mission critical business processes.

Putting Developers at the Center

Logic Apps has always been popular with system integrators, IT Pros and specialists. But for developers with the most demanding requirements Logic Apps is now addressing a number of customer feedback areas that you’ve told us are important. Firstly, Logic Apps now provides integration with VS Code through a new extension, released in Public Preview today, enabling local development. Today’s release aligns our hosting architecture with Azure Functions and Azure App Service enabling you to easily create Workflows and Functions that interoperate and extend each other’s capabilities in a more seamless way. In addition Logic Apps is integrated with the full developer toolchain, including GitHub Actions and a new deployment model based around a similar grouping concept to Function Apps, enabling multiple workflows to be deployed into a single Logic App compute boundary simplifying automated deployments and CI/CD pipelines.  And because you are now able to target these runtimes, Logic Apps inherits a number of additional features such as private endpoints, simpler and more cost effective VNET access, deployment slots and more.

One key capability you’ve asked us for is the ability to run Logic apps workflows where you need to, including on-premises and edge environments. With this release you can now run Logic Apps wherever you run Azure Functions – containerized in Docker or Kubernetes environments such as AKS (Azure Kubernetes Service) or App Service for a managed PaaS experience. This is in addition to local development in VS Code to provide you with more flexibility than ever in where and how you run your workloads. Additionally, with direct support for Dapr, you can use Logic Apps as a microservice workflow orchestrator, making complex API interactions easier to understand with Logic Apps’ visual designer.

With all these runtime improvements we have not overlooked your requests for more designer and editing enhancements and are pleased to share the next evolution of the Logic Apps workflow designer sporting a more modern, compact design. This makes it easier to author larger, more complex workflows and view more steps at once without scrolling. We’ve moved much of the step configuration out of the cards into a new panel design for simpler and faster authoring. We have additional features planned as well including a new layout engine enabling additional gestures to enable you more control over how your workflows are organized. 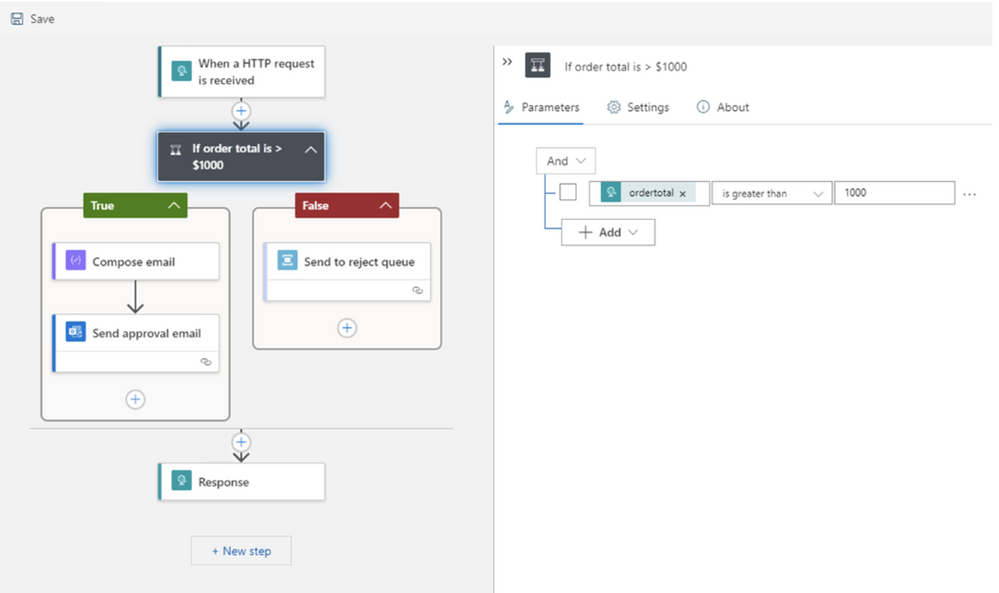 Finally, we've also heard you ask for better performance for request/response scenarios particularly and are excited to release stateless workflows. The primary intention of stateless workflows is to execute dramatically faster than regular Logic Apps which is made possible due to their stateless nature. Not only that, but stateless workflows provide almost all the same features and capabilities – and we’re working hard to close the differences further.  Stateless workflows enable Logic Apps to be used as high performing backend APIs to your applications, as well as enabling API orchestration visually to be able to more easily understand complex service interactions – without performance penalty.

Wrapping up and Getting Started

We thank all of you for depending on Logic Apps to run your business, for sharing your feedback and for helping make Logic Apps even better. This is a big release. We are continuing to enhance all these new features during public preview as we work towards General Availability and we encourage you to try out this groundbreaking release and share your feedback.

To get started right away, follow the detailed guide we’ve put together here. We can’t wait to see what you do and hear what you think!

What about connectors that existis in Flow / Power Automate, and are missing in Azure Logic Apps? What about "Approval" with notifications to phone (not just basic email) etc? Any integration with Flow/Power Automate if possible regarding to this "nicer" approvals?

Fantastic update @Jon Fancey really looking forward to stateless performance improvements and new designer. Are these changes coming to the existing consumption based logic apps soon or is that a roadmap item?

Congrats @Jon Fancey to you and your team! These are huge advances. :)

@MrNigel  - thanks for flagging, this was timing issue we quickly fixed

@nikolaiblackie - thanks for the feedback, yes the designer will be coming

@hkusulja thanks for your feedback, something we can certainly consider!

Much awaited update. Really looking forward to try the new designer in the public preview

This is a great feature and improvement on logic apps , I will try it out in particular the new designer and the different hosting environments that are now available both locally and in cloud  ( functions and ASE ) .

When will the Hosting Flexibility be available? It's not even in the preview portal right now.
Also, will the 100 concurrent job limit still apply when running within an App Service?

Still no ability to build a LogicApp in "dev" and then be able to promote it to "test", "live" etc?

I am really impressed with designer in Visual Studio 2019 - sometimes it starts to run slowly as in you start rename an action and you hear beeps as the UI can't handle the speed of typing .  I then close the designer and re-open when this happens.  Other niggles include no copy and paste actions  or Alert Me Actions as in Power Automates. One thing that would be cool is disable one or more actions ( you can do this  in Nintex) #justSayin .

Hosting flexibility is mentioned a lot, yet both Logic Apps and Durable Functions require Azure storage account for state storage.
As long as this dependency exists, it is not practical to deploy on-prem/other cloud, at the edge, etc...
Is this going to be solved anytime soon? It makes a lot of sense to be able to inject persistence layer implementation at startup.

Someone knows when the public preview will be available for Mac OS ?

Is there any plan or timeline for when this is supposed to go from preview to production-ready?