Turn on suggestions
Auto-suggest helps you quickly narrow down your search results by suggesting possible matches as you type.
Showing results for
Show  only  | Search instead for
Did you mean:
Configure RBAC for Cosmos DB with Managed Identity instead of Service Principal
By 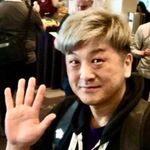 As the document below mentioned, we can access Cosmos DB with Managed Identity.

Recently, a new feature, RBAC for Cosmos DB, is added and it allows us to configure fine-grain control to data operations for Cosmos DB with Azure Active Directory accounts.

We don’t have to use any keys when using this feature to connect to Cosmos DB. Therefore, we can keep Cosmos DB more secure than ordinal style in connecting the DB.

The document mentioned above describes RBAC configuration with Service Principal, but Managed Identity also works. In this article, I elaborate how to configure RBAC for Cosmos DB with Managed Identity.

In this article, I use the following configuration. 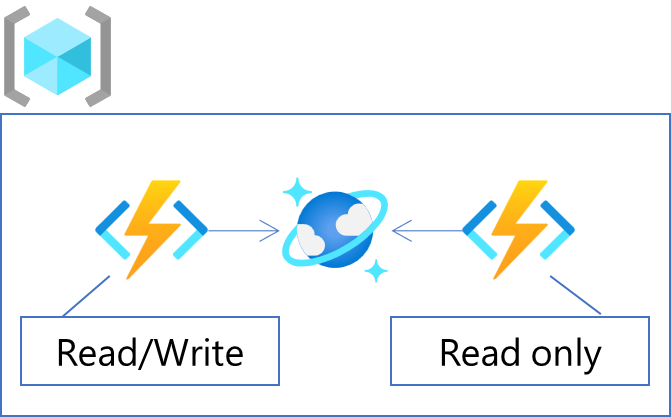 As I mentioned before, each Function App uses HTTP binding (trigger, output) and contains logic to interact with Cosmos DB. After creating a scaffold, we will add Cosmos DB interaction logic.

When accessing RBAC configured Cosmos DB with SDK, we have to get TokenCredential and use this credential to initialize CosmosClient or CosmosAsyncClient. TokenCredential is an interface and there are lots of implementation class of the interface, including ManagedIdentityCredential. So, we can also use Managed Identity to configure RBAC for Cosmos DB.

After that, codes corresponding to GET method and POST method are added.

To check the response code from Cosmos DB, this response code is used in the “upsert” code as a HTTP status returned by Function App.

When the implementation is completed, build Function Apps and deploy them to Azure.

Next, we create Managed Identity of each Function App. Navigate “Settings” > “Identity” in Azure Portal, and enable system assigned managed identity. As “Object (principal) ID” is used afterwards, I recommend you take a note of this ID. This operation is required in both Function Apps. 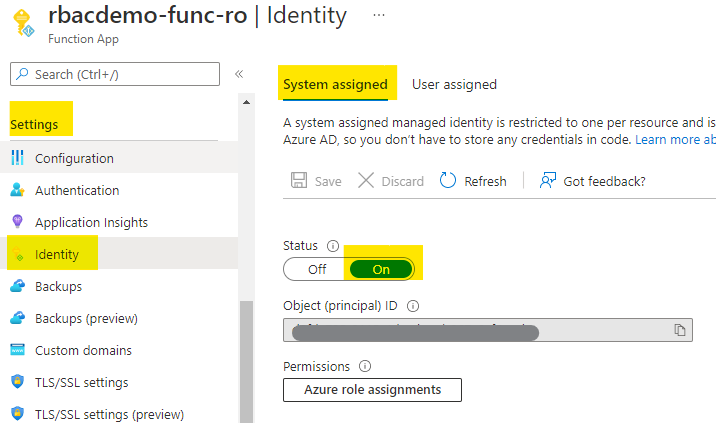 As usual, create Cosmos DB account, database, and container. In this article, database is named “Inventories”, and container is “Tracks”. Data listed below are populated in the container.

Next, two custom roles should be created for RBAC; one is “read only” role (MyReadOnlyRole), and the other is “read write” role (MyReadWriteRole). This operation is the same one in the document.

To assign Managed Identity to each role, we have to acquire roleDefinitionIdof each role with the following command.

roleDefinitionId is corresponding to the attribute “name” in output JSON document.

Finally, each roleDefinitionId is used to assign Function Apps to either MyReadOnlyRole role or MyReadWriteRole role. As you can see in the sample code below, Principal ID is object ID of each managed identity, which you would have taken notes in the previous section.

At first, check behaviors by a Function App in MyReadOnlyRole. GET method works fine and get data stored in Cosmos DB. 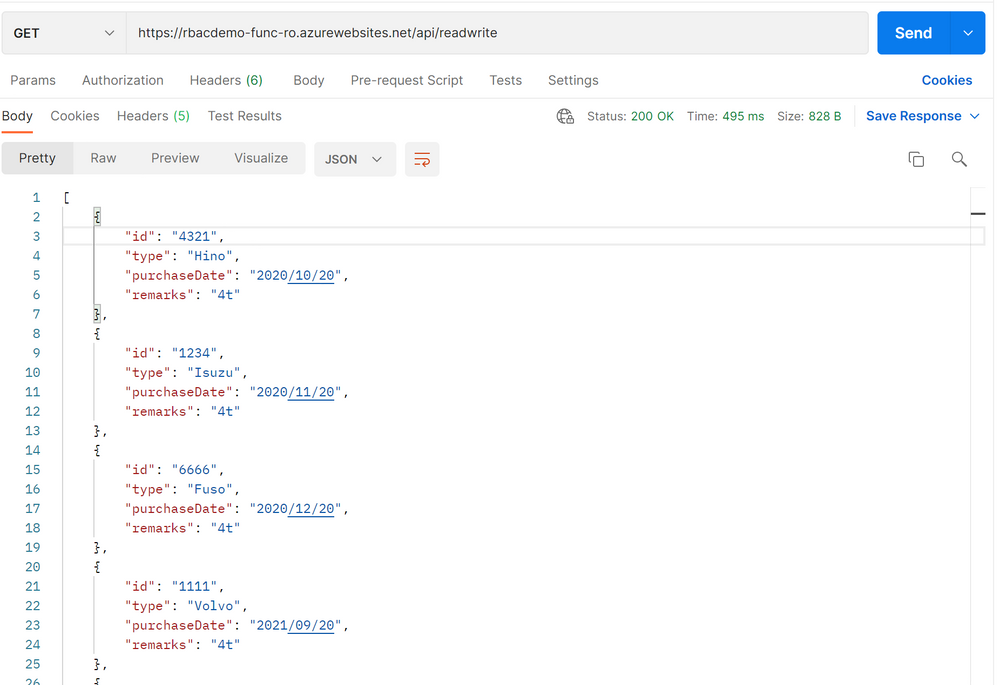 However, POST method raises exception due to RBAC and returned 403. This is an expected behavior. Masked principal is equal to Principal ID of Managed Identity for read-only Function App.

We can see error messages via Log Streams in Azure Portal.

On the other hand, both GET and POST methods work fine in case of another Function App in MyReadWriteRole. 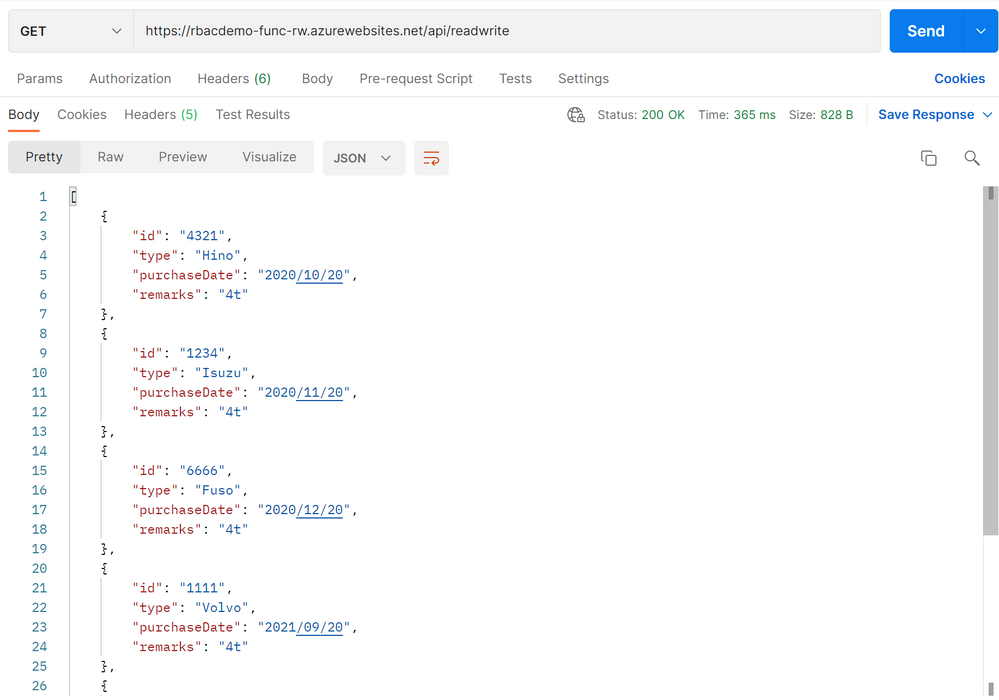 And use GET method again to retrieve all data, we can see id:4321 modified. 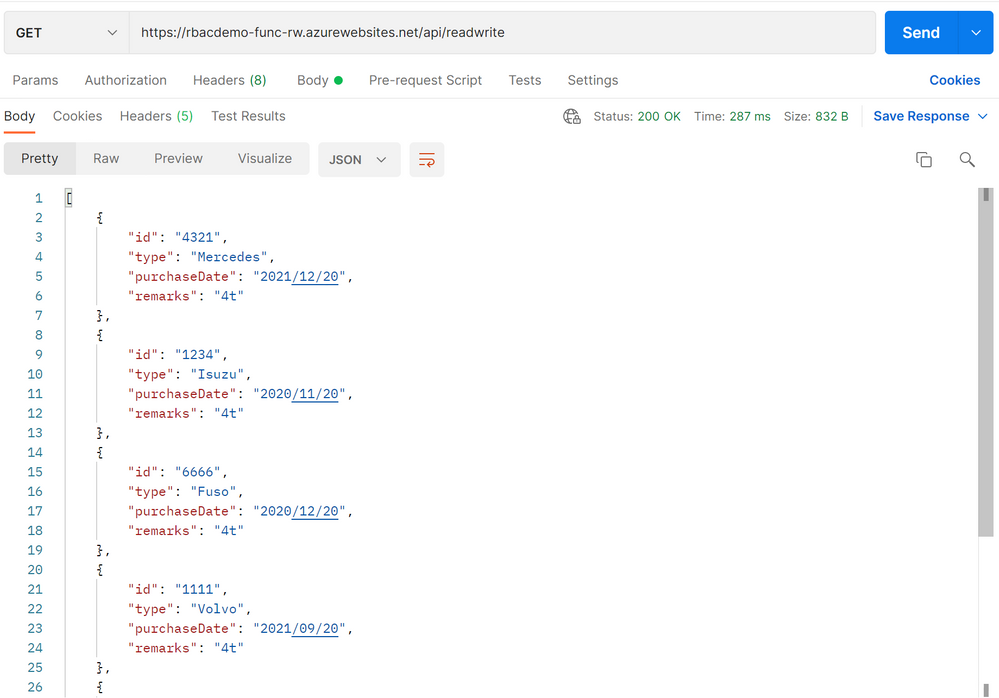 We confirmed that RBAC configuration provided safe access to Cosmos DB for applications. Even if “upsert” or “delete” method is called from an application in read-only role, no data is modified and we can keep data safe and exception arises.

Demo code used in this article is available in the following GitHub repository.