Moving your Azure AD authentication from federation on-premises to the cloud allows you to manage user and device sign-in from your control plane in Azure AD. You’ll benefit from reducing the dependency on on-premises infrastructure, which typically includes a farm of servers and proxies that need to be accessible from the internet. You won’t need to worry about patching of servers, availability and reliability of the authentication service, or managing ports on a firewall. In addition, you could also use staged rollout to move from a federated cloud identity provider to Azure AD authentication.

This helps you to avoid a cutover of your entire domain and selectively testing on a group of users to use cloud authentication capabilities like Azure Multi-Factor Authentication (MFA), Conditional Access, Identity Protection for leaked credentials, Identity Governance, and others.

Very cool. We are on the edge of dooing a cutover migration, but now we can try it out in the production enviroment before the cutover :)

Alex Simons (AZURE)   are there any concerns of enabling the staged rollout in a production tenant?
(It is a preview feature), but if only it is the experience of an migrated user that "may be" impacted of the preview statement. then i have no concerns?

@Micki Wulffeld - Yes, this is meant for production use and is only applied to the user who is enabled for staged rollout and not the entire federated domain. We had close to hundred customers who did this during private preview before they could cut over. You can reach out to me at jitheshr@microsoft.com if you have any questions.

We already have our O365 auth switched to Passord Hash/SSO, however we still have  ton of 3rd party SAAS apps (ServiceNow for example) using ADFS, however they are setup to go to to the on-prem ADFS server directly, so in that cause I would not be able to use the Staged rollout since I have to work with the SAAS vendor to point to Azure AD instead of our ADFS server?  If so is there an easy way to migrate that?

Does this apply if we wanted to migrate just from on-prem MFA server to the Azure cloud MFA? Are there any other requirements / prerequisites for doing this so the user will NOT have to re-register for MFA (keep the same user settings as configured on the on-prem MFA server) ? And the same question that Daniel Schmidt applies as well.

@Daniel - yes this is not used for ADFS federations of apps. The feature is to only help you with Cloud Authentication of your Office 365 RelyingParty. After using staged rollout for a group of users, it would easier for you to switch from Office 365 federation with ADFS to cloud authentication. For migrating your apps from ADFS to AzureAD - look at this space

Now we activated it, we found that when typing https://webmail.ourdomain.dk Or just http://mail.outdomain.dk , that are CNAME to outlook.com, we end up with our adfs server as sign in method, for users that are stage migrated.

So the domain conversion MS are doing is not redirecting to Cloud auth. (preview problem i guess)

@Jithesh Raj (JR)  - That is the main reason we want to migrate to Azure MFA (cloud), to be able to switch to modern authentication, but the main problem is that we don't want to have to cut off the users from Azure MFA Server(on-prem) and re-register all users to Azure MFA. And, currently there is no migration path for migrating users from on-prem MFA to Azure MFA. Hopefully Microsoft will provide some guidance in this scenario or develop a tool which will help with this kind of migration. Thank you for your reply, much appreciated!

This is awesome news. My Org is coming up quickly on cutting over to Cloud Authentication, so this preview is a huge win for us. I'll be completing the necessary setup this week and testing with some of our IT staff.

If anyone are provisioning disabled user with [Must change pw nxt logon] AD Flag, and activating them later, you might run into PasswordHashSync problems.
https://techcommunity.microsoft.com/t5/ITOps-Talk-Blog/PowerShell-Basics-How-to-Force-a-Full-Passwor...

I enabled this feature today as per the video guide, it still redirects to ADFS authentication page when using my account. 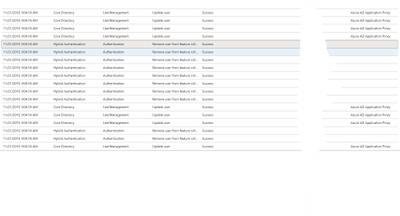 Are anyone seeing this same experience? Suddently everyone is disabled from staged rollout feature. I cant trace any admin who could had done this. and just before the feature is removed, the Azure AD Application proxy ( witch we have not installed yet) updated same users???

This morning everyone are enabled again for staged rollout  ?

@Jithesh Raj (JR) was there any issues regading this behaviour?

And again the coloumn : initiated by actor is empty, so its must be a "system" (behind the scenes) user who did this 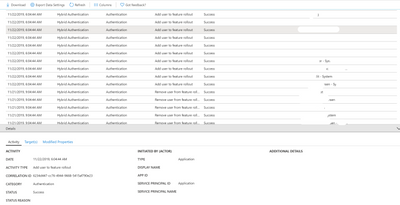 Not all users are facing this issue.

Awesome Jithesh. thank you for sharing such an useful info

Hello, I successfully started staged rollout, I wanna dismiss ADFS authentication (5 domains Federated in the same tenant) and move to PHS+Seamless SSO. I did't find anything about how to correctly cutoff ADFS while all users will be staged out.

I am plannning to move gradually domain by domain (creating a specific migration group with users of each domain) by Staged Rollout ... and when all users have been tested which I suppose the next steps are

- when all federated domains are migrated, turn off Staged Rollout Features
Is it correct to totally decommission Federated Authentication after Staged Rollout?

@MassV  -  Your plan looks accurate. When you turn off staged rollout, remove the groups from staged rollout and then turn off using the ON/OFF sliders.

Jithesh Raj (JR)
Microsoft
@bart vermeersch  - The issue looks to be with Password Hash Sync and not staged rollout. Use out PHS troubleshooting tools mentioned here
https://docs.microsoft.com/en-us/azure/active-directory/hybrid/tshoot-connect-password-hash-synchron...
0 Likes
Like

PHS is working, however internally I'm not getting the seamless sso experience I was expecting, i.e. I still have to enter a UPN at which point I am then authenticated through.  I can see in the Azure AD sign-in logs that Seamless SSO was used,  however before cutting our Org fully from federated to managed I'd like to test how the experience will actually be for users. Is that possible? I understand that due to domain_hint we can't test all applications including exchange online but is there any other method apart from just hitting https://myapps.microsoft.com/ via a private browser session?

Thanks, we found out that a lot of our students were still using their initial temp password (which can't be synced). We are still trying to figure out why they weren't forced to change their initial the password in the first place.

We are looking forward to https://docs.microsoft.com/en-us/azure/active-directory/hybrid/how-to-connect-password-hash-synchron... but the info is still unclear on that.

Since a 2/3 weeks it looks like staged roll-out is broken; we can no longer add groups/change groups added to staged roll-out for PTA. This happens on different Tenants we control, so it seems a generic issue on the PTA Staged Roll-Out preview. Any date to make staged roll-out GA and have it working again?

@Frank Rijt-van Could you please reach out to us through our support channels with your tenant IDs so that we can investigate.

Does this feature applies if we are migrating from PTA to PHS?

@Martin-AJ  - If you are already using PTA and want to switch to PHS- you need to use Azure AD Connect. This feature is to test Cloud Authentication while you are in a federated state.

Thanks for this doc and videos but I dont see many comments about stage rollout for PTA.

Do I need to deploy the agents if I want to try out PTA or can I do it without them by simply using the Stage Rollout from my Portal? I am on Fed State.

Any docs or videos you can send me please?

@Dolinhas : Also for staged roll-out you need PTA agents installed in your environment to handle the authentication requests. We enabled staged rollout for all our users in a phased approach. When no issues occurred with all the users enabled for staged roll out PTA, we switched from ADFS towards PTA using method B as described by Microsoft in this article: https://docs.microsoft.com/en-us/azure/active-directory/hybrid/plan-migrate-adfs-pass-through-authen.... The migration towards PTA went flawless for all our users (+20K).

Thanks for coming back to me - really appreciate you help.

I am glad to hear that your deployment went well - my infra is less than 2K users and computers.

I have a question about the Computer Account and SPNs created during the Stage Rollout:

If I decide to cancel the Stage Rollout will those accounts still be in my on-prem AD? If so can these be safely removed?

Also about your migration - did you switch off the Stage rollout slider or how does that part of the portal look after you gone to PTA or PHA?

Any problems you found during the trial or after the full migration?

@Dolinhas: As for your first question: most likely those accounts will stay, but you can safely remove them next to uninstalling the PTA agent(s) if you cancel the staged rollout. After the migration the staged roll-out switch is greyed out as your already on PTA. We didn't encounter any problems. Make sure that your synced accounts all have a UPN that is a verified and registered domain in Office 365. So if your synced users have an on prem UPN like "@domain.local" make sure the have a "@yourdomain.com" UPN if they need to logon to Office 365.

Great improvement is that also on domain password expiration is handled with PTA from the Azure AD logon (unlike ADFS).

We encountered no issues during migration.

Thanks for that, Frank

My idea is to PTA so my machines get become Hybrid in Azure so I can manage them in Intune.

I just realised ... can I use Stage RollOut to sync machines on-prem to Azure AD to they become Hybrid type? or is Stage RollOut just for users?

For newer Windows 10 builds device sync is not needed, they are directly registered in Azure AD (also with Hybrid) by themselves as long as your DNS settings are correct.

Just about to test the staged rollout, my domain dosn't have Seemless SSO enabled, if i enable this via powershell would this have any affect to my current Ferderated setup?

we are going to use "Option B: Switch from federation to pass-through authentication by using Azure AD Connect and PowerShell"

Does this method support phased rollout?

@Jithesh Raj (JR) thanks for your quick reply & apologies if i did not put the question correctly.

For customers who fall under option 2 category, do we have to first run the poweshell to change the domain from federated to managed before running staged rollout.

@Pa_D In either case you just need to do the below

what happens after you switched over, do you still leave the staged rolled out toggles on?

@ZimTaylor You can remove the group and turn off Staged Rollout after you cutover from federated to managed. There is absolutely no purpose it keep staged rollout enabled!

perfect, i can do that, i'm switching ws-fed identity provider(onelogin, which is similar to okta/pingfed) this weekend to PHS , my worry is that it may reset everyones passwords, is this the case?

@ZimTaylor send you a direct message to catch up over mail