Turn on suggestions
Auto-suggest helps you quickly narrow down your search results by suggesting possible matches as you type.
Showing results for
Show  only  | Search instead for
Did you mean:
Your 24 Month XP Warning
By

First published on TechNet on Apr 08, 2012
Hi all, Ned here again with a public service announcement:

For the temporally challenged, that’s exactly two years from today. Hopefully, some of you don’t care because you’ve already gotten off XP. After all, Windows 7 has a 41% piece of Windows desktop distributions now according to NetMarketShare.com . Here’s their March 2012 take: 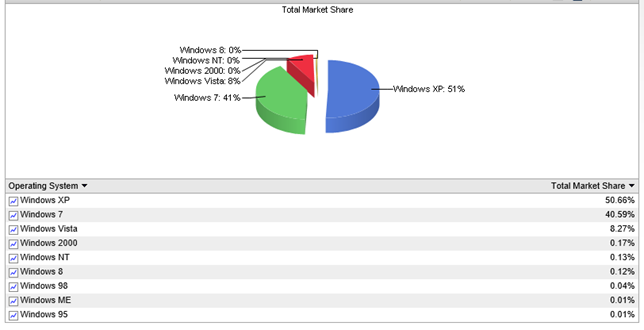 What that number also means though is that roughly 51% of the remaining desktops are still on XP. Hundreds of millions of computers that, two years from today, will stop getting security updates and lose support from third party software vendors .

If you have not started migrating your Windows XP environment to Windows 7 and begun evaluating Windows 8 Consumer Preview , you are probably late. According to our own customer deployment data, enterprise desktop replacement projects average 18-32 months. As someone who writes a lot about USMT , I can say that a customized PC migration undertaking is no joke. There are loads of moving parts in mass PC replacements and every company is different, even within the common areas of desktop, mobile, and work-from-home machines. If you’re prudent, you’ll spend months planning and testing before you get anywhere near your first end user. That means if you’re a company with 50,000 XP desktops, you’ll have to average around 2,100 desktops migrated a month before support ends. If you take the more realistic thinking and assume 250 working days in a year, you must average 100 migrated computers per working day , starting this minute.

The fiscal year is drawing to a close and the 24 month clock is running. Do you know where your XP clients are?

- Ned “like the Cubs, it’s a rebuilding year” Pyle

PS: Oh, and Vista mainstream support ended April 10th (today, as I wrote this). That means now it only gets security updates for the next 5 years, no further QFEs or service packs.