Turn on suggestions
Auto-suggest helps you quickly narrow down your search results by suggesting possible matches as you type.
Showing results for
Show  only  | Search instead for
Did you mean:
TLS Handshake errors and connection timeouts? Maybe it’s the CTL engine….
By

Marius and Tolu from the Directory Services Escalation Team.

Today, we’re going to talk about a little twist on some scenarios you may have come across at some point, where TLS connections fail or timeout for a variety of reasons.

You’re probably already familiar with some of the usual suspects like cipher suite mismatches, certificate validation errors and TLS version incompatibility, to name a few.

Recently we’ve seen a number of cases with a variety of symptoms affecting different customers which all turned out to have a common root cause.

We’ve managed to narrow it down to an unlikely source; a built-in OS feature working in its default configuration.

We’re talking about the automatic root update and automatic disallowed roots update mechanisms based on CTLs.

When a user on a Windows client visits a secure Web site (by using HTTPS/TLS), reads a secure email (S/MIME), or downloads an ActiveX control that is signed (code signing) and encounters a certificate which chains to a root certificate not present in the root store, Windows will automatically check the appropriate Microsoft Update location for the root certificate.

If it finds it, it downloads it to the system. To the user, the experience is seamless; they don’t see any security dialog boxes or warnings and the download occurs automatically, behind the scenes.


During TLS handshakes, any certificate chains involved in the connection will need to be validated, and, from Windows Vista/2008 onwards, the automatic disallowed root update mechanism is also invoked to verify if there are any changes to the untrusted CTL (Certificate Trust List).

A certificate trust list (CTL) is a predefined list of items that are authenticated and signed by a trusted entity.

The mechanism is described in more detail in the following article:


An automatic updater of untrusted certificates is available for Windows Vista, Windows Se...


It expands on the automatic root update mechanism technology (for trusted root certificates) mentioned earlier to let certificates that are compromised or are untrusted in some way be specifically flagged as untrusted.

Customers therefore benefit from periodic automatic updates to both trusted and untrusted CTLs.

So, after the preamble, what scenarios are we talking about today?

Here are some examples of issues we’ve come across recently. 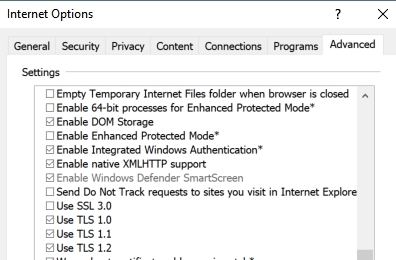 Understanding ATQ performance counters, yet another twist in the world of TLAs


A user sends a certificate on a session. The server need to check for certificate revocation which may take some time.*


This becomes problematic if network communication is restricted and the DC cannot reach the Certificate Distribution Point (CDP) for a certificate.


If there are a significant number of sessions, you might want to look at CAPI-Logging.


So, what’s the story? Are these issues related in anyway?

Well, as it turns out, they do have something in common.

Again, there is plenty of documentation on this subject, such as


During certificate validation operations, the CTL engine gets periodically invoked to verify if there are any changes to the untrusted CTLs.

In the example scenarios we described earlier, if the default public URLs for the CTLs are unreachable, and there is no alternative internal CTL distribution point configured (more on this in a minute), the TLS handshake will be delayed until the WinHttp call to access the default CTL URL times out.

By default, this timeout is usually around 15 seconds, which can cause problems when load balancers or 3 rd party applications are involved and have their own (more aggressive) timeouts configured.

If we enable CAPI2 Diagnostic logging, we should be able to see evidence of when and why the timeouts are occurring. 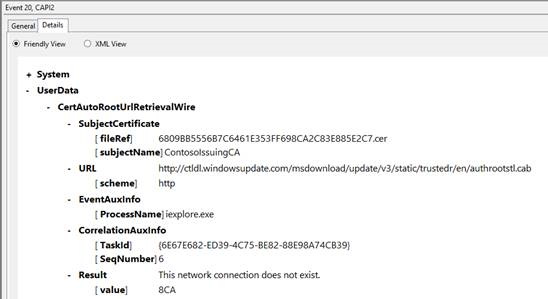 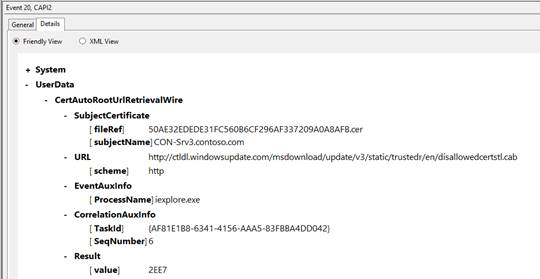 Event ID 53 error message details showing that we have failed to access the disallowed CTL : 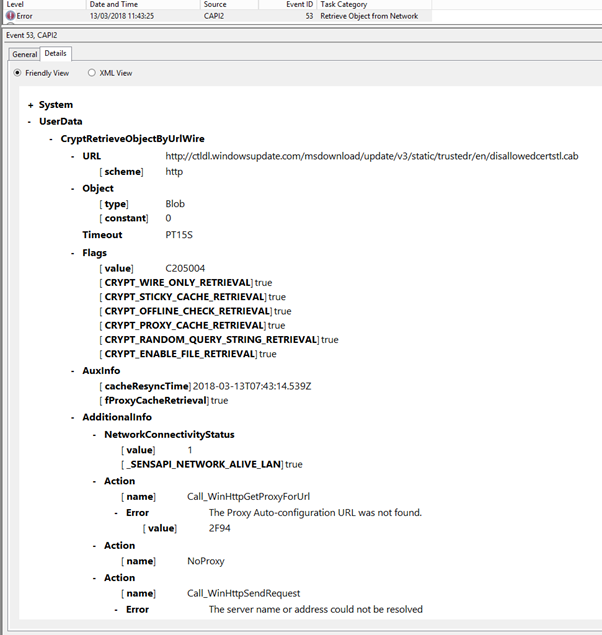 The following article gives a more detailed overview of the CAPI2 diagnostics feature available on Windows systems, which is very useful when looking at any certificate validation operations occurring on the system:


To help us confirm that the CTL updater engine is indeed affecting the TLS delays and timeouts we’ve described, we can temporarily disable it for both the trusted and untrusted CTLs and then attempt our TLS connections again.


After applying these steps, you should find that your previously failing TLS connections will no longer timeout. Your symptoms may vary slightly, but you should see speedier connection times, because we have eliminated the delay in trying and failing to reach the CTL URLs.

We should now REVERT the above registry changes by restoring the backup we created, and evaluate the following, more permanent solutions .

We previously stated that disabling the updater engine should only be a temporary measure to confirm the root cause of the timeouts in the above scenarios.


If you require a more granular control of which CAs are trusted by client machines, you can deploy the 3 rd Party CA certificates as needed via GPO


So there you have it. We hope you found this interesting, and now have an additional factor to take into account when troubleshooting TLS/SSL communication failures.
4 Likes
Like
1 Comment