Turn on suggestions
Auto-suggest helps you quickly narrow down your search results by suggesting possible matches as you type.
Showing results for
Show  only  | Search instead for
Did you mean:
Options for Managing Go to Desktop or Start after Sign in in Windows 8.1
By

Options for Managing Go to Desktop or Start after Sign in in Windows 8.1


Hi, David here.  Over the past year we’ve gotten a lot of feedback from our customers about the pain of changing from older versions of Windows over to Windows 8 and Windows 8.1.  While it’s a great OS with a lot of compelling features, it’s a big change – and as any desktop administrator will tell you, change is a really scary thing for users who just want to be able to log in and get their work done every day.  Well, we listened, and in the update we’re releasing this week, we’ve made it easier for you to help manage the change for your users and make the transition to Windows 8.1 a little more friendly for them.  Below is some awesome information courtesy of the inestimable Warren Williams.


First, a quick history lesson.  Don’t worry, there’s not a quiz at the end.


Starting with Windows 8.0 Start is the main application launch pad in Windows. Start replaces the Start Menu used in previous versions of Windows going back to Windows 95.


With each update of Windows 8.0, more control over Start’s configuration has been added.


In Windows 8.1 Microsoft added the ability for users and administrators to control what environment would be displayed when the user logged on. The user can either boot to the Start screen or the Desktop. The behavior was still to always boot to the Start screen however the behavior could be controlled manually with a setting in the Taskbar Navigation properties. Administrators could use a new a Group Policy “Go to the desktop instead of Start when signing in” to specify what environment the user would see after signing in.


Everyone got that?  Ok, let’s talk about the new stuff now.


In Windows 8.1 Update Microsoft added the ability for the OS to perform device type detection. After applying Windows 8.1.update Tablet devices will boot to the Start Screen and have modern application file associations. All other device types boot to the desktop and the desktop application file associations. The two preceding behaviors occur if the default setting for Taskbar Navigation properties have not changed.  Some things to note:


The possible values for Power_Platform_Role are:


How to query a device’s Power_Platform_Role value

At the top of the report look for Platform role field


Tablets that boot to the desktop

Options to Control Sign in to Desktop Behavior in Windows 8.1 Update


Fortunately, you can change the behavior without having to be an OEM.


a. If you want the Start Screen to load when a user logs on uncheck the box “When I sign in or close all apps on a screen, go to the desktop instead of Start”


b. If you want the Desktop to load when a user logs on check the box “When I sign in or close all apps on a screen, go to the desktop instead of Start” 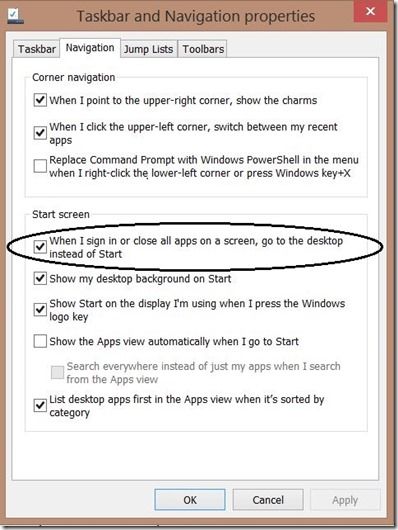 
“This policy setting allows users to go to the desktop instead of the Start screen when they sign in.


If you enable this policy setting, users will always go to the desktop when they sign in.


If you disable this policy setting, users will always go to the Start screen when they sign in.


If you don’t configure this policy setting, the default setting for the user’s device will be used, and the user can choose to change it.” 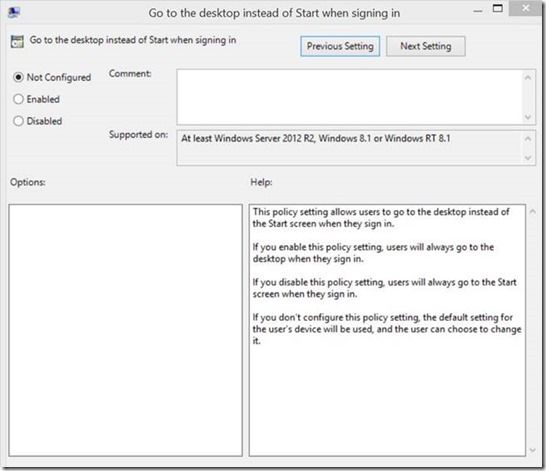 
Deployment Admins can specify if the user go to Start or the desktop after signing in using the DesktopOptimization tag in their unattend.xml file. This method allows admins to specify a default behavior and still allow users the ability to set their preferred Sign in environment.


For more information consult the Windows Assessment and Deployment Kit (ADK) helpfile. The ADK can be downloaded from here. http://www.microsoft.com/en-us/download/details.aspx?id=30652


Hopefully this information helps all of you out there with giving your users a better experience on Windows 8.1.