Migrating your Certification Authority Hashing Algorithm from SHA1 to SHA2

Migrating your Certification Authority Hashing Algorithm from SHA1 to SHA2

Hey all, Rob Greene here again. Well it’s been a very long while since I have written anything for the AskDS blog. I’ve been heads down supporting all the new cool technology from Microsoft.


I wanted to see if I could head off some cases coming our way with regard to the whole SHA1 deprecation that seems to be getting talked about on all kinds of PKI related websites. I am not discussing anything new about Microsoft SHA1 deprecation plans. If you want information on this topic please look at the following link: SHA1 Deprecation Policy - http://blogs.technet.com/b/pki/archive/2013/11/12/sha1-deprecation-policy.aspx


It does appears that some Web browsers are on a faster timeline to not allow SHA1 certificates as Goggle Chrome has outlined in this blog: http://blog.chromium.org/2014/09/gradually-sunsetting-sha-1.html


So as you would suspect, we are starting to get a few calls from customers wanting to know how to migrate their current Microsoft PKI hierarchy to support SHA2 algorithms. We actually do have a TechNet article explaining the process.


Before you go through this process of updating your current PKI hierarchy, I have one question for you. Are you sure that all operating systems, devices, and applications that currently use internal certificates in your enterprise actually support SHA2 algorithms?


How about that ancient Java based application running on the 20 year old IBM AS400 that basically runs the backbone of your corporate data? Does the AS400 / Java version running on it support SHA2 certificates so that it can do LDAPS calls to the domain controller for user authentication?


What about the old version of Apache or Tomcat web servers you have running? Do they support SHA2 certificates for the websites they host?


You are basically going to have to test every application within your environment to make sure that they will be able to do certificate chaining and revocation checking against certificates and CRLs that have been signed using one of the SHA2 algorithms. Heck, you might remember we have the following hotfix’s so that Windows XP SP3 and Windows Server 2003 SP2 can properly chain a certificate that contains certification authorities that were signed using SHA2 algorithms.


Applications that use the Cryptography API cannot validate an X.509 certificate in Windows Server 2003


Inevitably we get the question “What would you recommend Microsoft?” Well that is really a loaded question since we have no idea what is in your vast enterprise environment outside of Microsoft operating systems and applications. When this question comes up the only thing that we can say is that any currently supported Microsoft operating system or application should have no problems supporting a certificate chain or CRL signed using SHA2 algorithms. So if that is the only thing in your environment you could easily follow the migration steps and be done. However, if you are using a Microsoft operating system outside of main stream support, it most likely does not support SHA2 algorithms. I actually had a customer ask if Windows CE supported SHA2; which I had to tell him it does not. (Who knew you guys still ran those things in your environments!)


If you have any 3 rd party applications or operating systems, then I would suggest you look on the vendor’s website or contact their technical support to get a definitive answer about support for SHA2 algorithms. If you are using a product that has no support then you might need to stand up a SHA2 certificate chain in a lab environment and test the product. Once a problem has been identified you can work with that vendor to find out if they have a new version of the application and/or operating system that supports SHA2 or find out when they plan on supporting it.


Nah, I want to do the migration!


So if you made it down to this part of the blog you either actually want to do the migration or curiosity has definitely got the better of you, so let’s get to it. The TechNet article below discusses how to migrate your private key from using a Cryptographic Service Provider (CSP) which only supports SHA1 to a Key Storage Provider (KSP) that supports SHA2 algorithms:


In addition to this process, I would first recommend that you export all the private and public key pairs that your Certification Authority has before going through with the steps outlined in the above TechNet article. The article seems to assume you have already taken good backups of the Certification Authorities private keys and public certificates.

When you change the hashing algorithm over to a SHA2 algorithm you are going to have to migrate all CA certificates to use the newer Key Storage Providers if you are currently using Cryptographic Service Providers. If you are NOT using the Microsoft Providers please consult your 3 rd party vendor to find out their recommended way to migrate from CSP’s to KSP’s. This would also include those certification authorities that use Hardware Storage Modules (HSM).


Steps 1 -9 in the article further explain backing up the CA configuration, and then changing from CSP’s over to KSP’s. This is required as I mentioned earlier, since SHA2 algorithms are only supported by Key Storage Providers (KSP) which was not possible prior to Windows Server 2008 Certification Authorities. If you previously migrated your Windows Server 2003 CA to one of the newer operating systems you were previously kind of stuck using CSP’s.


Step 10 is all about switching over to use SHA2 algorithms, and then starting the Certification Authority back up.


· Update the configuration on the CA that issued its certificate and then renew with a new key.


· If it is a Root CA then you also need to renew with a new key.


Run: CertUtil –CRL on the certification authority; which causes the CA to generate new CRLs. Once this is done double click on one of the CRLs and you will see the new signature algorithm. 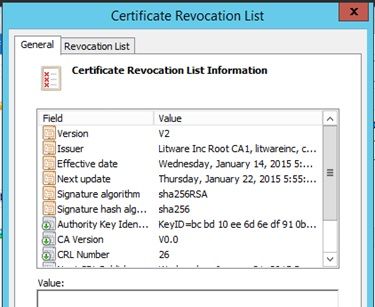 
As you can see, asking that simple question of “can I migrate my current certification authority from SHA1 to SHA2” it’s really not such an easy question to answer for us here at Microsoft. I would suspect that most of you are like me and would like to err on the side of caution in this regard. If this was my environment I would stand up a new PKI hierarchy that is built using SHA2 algorithms from the start. Once that has been accomplished, I would test each application in the environment that leverages certificates. When I run into an application that does not support SHA2 I would contact the vendor and get on record when they are going to start supporting SHA2, or ask the application owner when they are planning to stop using the application. Once all this is documented I would revisit these end dates to see if the vendor has updated support or find out if the application owner has replaced the application with something that does support SHA2 algorithms.