Ned here again. One of the more interesting new features of Windows Server 2008 R2 and Windows 7 is Managed Service Accounts. MSA’s allow you to create an account in Active Directory that is tied to a specific computer. That account has its own complex password and is maintained automatically. This means that an MSA can run services on a computer in a secure and easy to maintain manner, while maintaining the capability to connect to network resources as a specific user principal.

Let’s be about it.

And this leads me to how MSA’s handle passwords – it’s pretty clever. An MSA is a quasi-computer object that utilizes the same password update mechanism used by computer objects. So, the MSA account password is updated when the computer updates its password ( every 30 days by default ). This can be controlled - just like a computer’s password - with the following two DWORD values:

MSA’s, like computers, do not observe domain or fine-grained password policies. MSA’s use a complex, automatically generated password (240 bytes, which is 120 characters, and cryptographically random). MSA’s cannot be locked out, and cannot perform interactive logons. Administrators can set an MSA password to a known value, although there’s ordinarily no justifiable reason (and they can be reset on demand; more on this later). 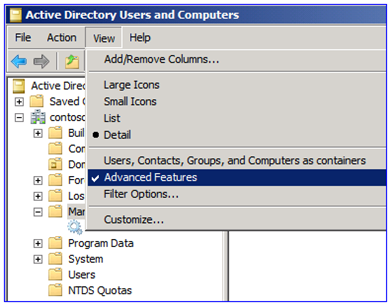 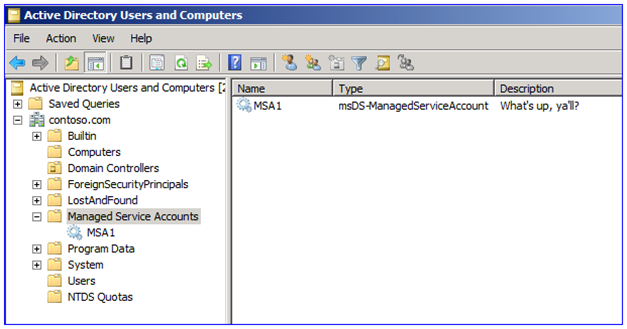 As you will see later though, there isn’t much point to looking at this in AD Users and Computers because… wait for it… all your administration will be done through PowerShell . You knew that was coming, didn’t you?

MSA’s automatically maintain their Kerberos Service Principal Names (SPN), are linked to one computer at a time, and support delegation. A network capture shows a correctly configured MSA using Kerberos:

To use MSAs you must:

MSAs do not require a specific Forest Functional Level, but there is a scenario where part of MSA functionality requires a Windows Server 2008 Domain Functional Level. This means:

2. You associate the MSA with a computer in AD.

3. You install the MSA on the computer that was associated.

4. You configure the service(s) to use the MSA.

We begin by using PowerShell to create the new MSA in Active Directory. You can run this command on Windows Server 2008 R2 or Windows 7 computer that has the RSAT feature “Active Directory Module for Windows PowerShell” enabled. Perform all commands as an administrator.

2. Import the AD module with:

4.    Associate the new MSA with a target computer in Active Directory:

5. Now logon to the target computer where the MSA is going to be running. Ensure the following features are enabled: 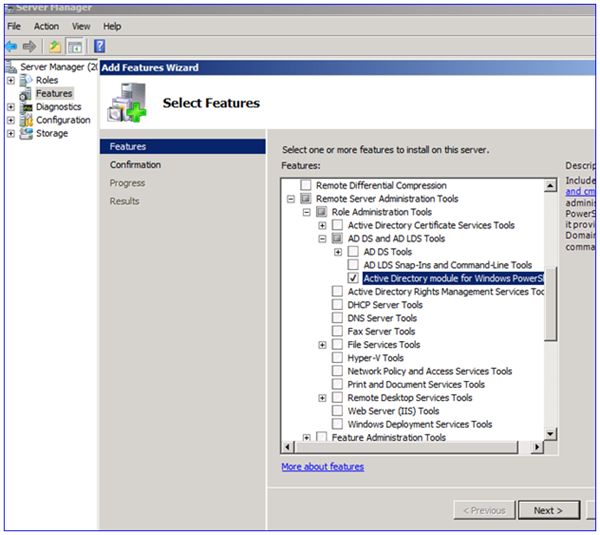 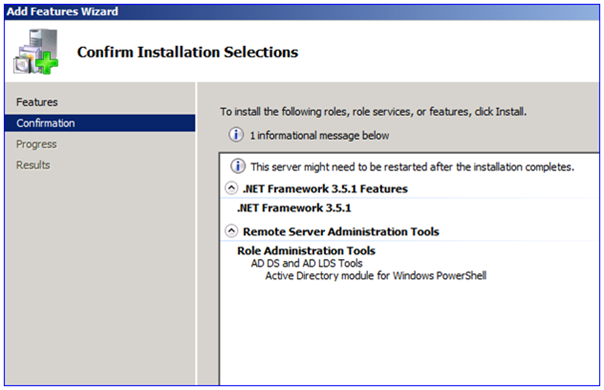 7. Import the AD module with:

8. Install the MSA with:

Install-ADServiceAccount -Identity <the new MSA you created in step 3>

Note: Besides being a local administrator on the computer, the account installing the MSA needs to have permissions to modify the MSA in AD. If a domain admin this "just works"; otherwise, you would need to delegate modify permissions to the service account's AD object.

9. Now you can associate the new MSA with your service(s).

b. Edit your service properties.

c. On the Log On tab, set “This Account” to the domainname$ of your MSA. So if your MSA was called “AskDS” in the “contoso.com” domain, it would be: 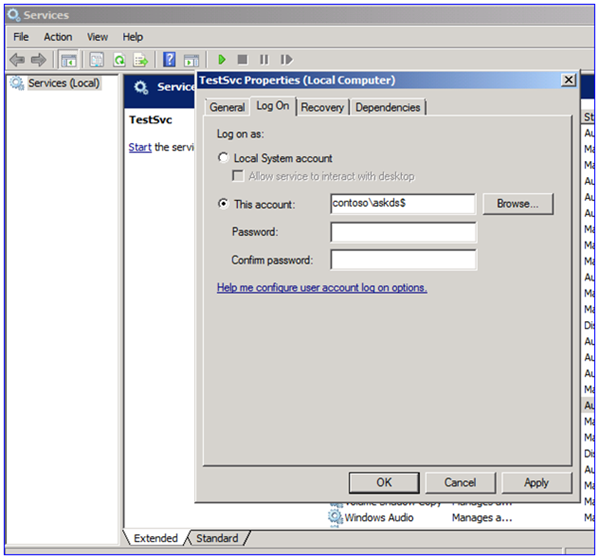 e. Click Apply and Ok to the usual “Logon as a Service Right granted” message: 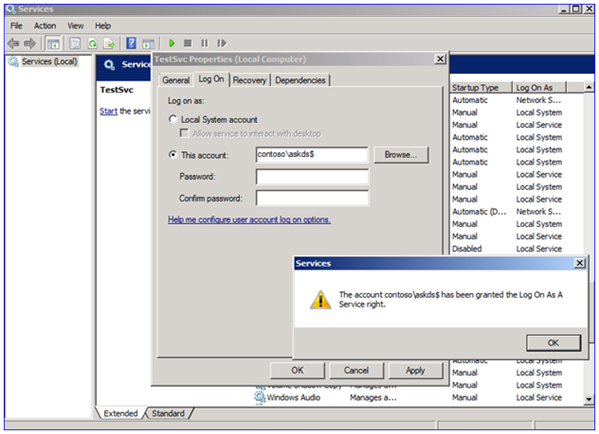 f. Start the service. It should run without errors. 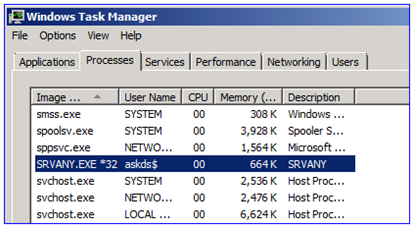 b. Paste this sample script into a text file:

e. In your PowerShell console, get your script policy with:

f. Set your execution policy to remote signing only: 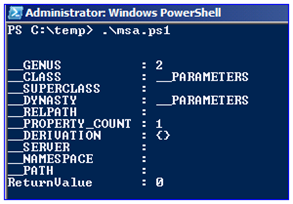 h. Set your execution policy back to whatever you had returned in step E:

Note: Obviously, I made this example very manual; it could easily be automated completely. That’s the whole point of PowerShell after all. Also, it is ok to shake your fist at us for not having the User and Password capabilities in the V2 PowerShell cmdlet Set-Service . Grrr.

Removing an MSA is a simple two-part process. Now that you know all the PowerShell rigmarole, here are the two things you do:

1. Use the following PowerShell cmdlet to remove the MSA from a local computer:

2. Optionally, remove the service account from Active Directory. You can skip this step if you just want to reassign an existing MSA from one computer to another.

3. Add the MSA through the Members tab: 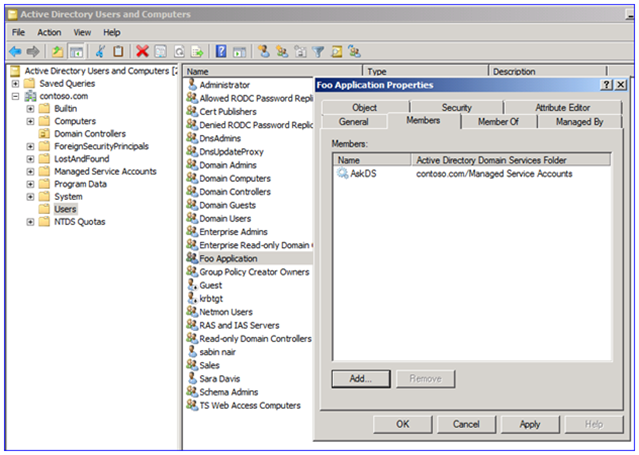 Add-ADGroupMember "<your group>" "<DN of the MSA>"

Note : Use the distinguished name of the MSA; otherwise Add-ADGroupMember will return “cannot find object with identity”. Don’t try to use NET GROUP as it doesn’t know how to find MSA’s.

Managed Service Accounts are useful in most service scenarios. There are limits though, and understanding these up front will save you planning time later.

The MSA can only exist on one computer at a time; therefore, MSAs are not compatible with cluster fail-over scenarios. And authentication through a load balancer would require you to provide a Kerberos SPN of the MSA account-- that won’t work either. Load balancing scenarios include Microsoft software-based and third-party hardware and software-based load balancing solutions. If you’re clustering or NLB’ing, then you are still going to need to use old fashioned service accounts.

A key clarification: You can have multiple MSAs installed on a single computer. So if you have an application that uses 5 services, it’s perfectly alright to use one MSA on all five services or five different MSA’s at once.

For the most part MSA’s are straightforward and have easily understandable errors. There are a few issues that people seem to run into repeatedly though:

Error: Error 1069: The service did not start due to a logon failure.

Cause: Typically caused by the MSA being disabled. Use Set-ADServiceAccount to enable your MSA.

Cause: You are trying to associate an MSA with a computer that is already used by another computer. The error notes the server (in this case, 2008r2-f-05) currently using the MSA. Un-associate and uninstall the MSA from the old computer before using it on the new one.

Error: Add-ADComputerServiceAccount : The object could not be found on the server.

Cause: You gave an incorrect identity for the MSA and PowerShell cannot find it. Either it’s been deleted or you typed in the wrong name.

Cause: You did not remove the password information in the service’s Logon On properties when editing in services.msc . See the setup steps above.

Cause: This is typically caused by not adding the “$” character to the end of the account name used in the Log On tab in the service’s properties in services.msc. Also, this error is caused by simply mistyping the name of the account or forgetting to add the appropriate domain.

For further reading on Managed Service Accounts, check out:

And there you go – now go forth and tame your environment.

- Ned ‘120 characters ought to be enough for anyone’ Pyle