Turn on suggestions
Auto-suggest helps you quickly narrow down your search results by suggesting possible matches as you type.
Showing results for
Show  only  | Search instead for
Did you mean:
Inventorying Computers with AD PowerShell
By

First published on TechNet on Feb 04, 2010
Hi, Ned here again. Have you ever had to figure out what operating systems are running in your domain environment so that you can plan for upgrades, service pack updates, or support lifecycle transitions? Did you know that you don’t have to connect to any of the computers to find out? It’s easier than you might think, and all possible once you start using AD PowerShell in Windows Server 2008 R2 or Windows 7 with RSAT .


The cmdlet of choice for inventorying computers through AD is Get-ADComputer . This command automatically searches for computer objects throughout a domain, returning all sorts of info.

As I have written about previously my first step is to fire up PowerShell and import the ActiveDirectory module:

Then if I want to see all the details about using this cmdlet, I run:


Basics
Now I want to pull some data from my domain. I start by running the following:

Important note: in all my samples below, the lines are wrapped for readability.

Another important note (thanks dloder): I am going for simplicity and introduction here, so the -Filter and -Property switches are not designed for perfect efficiency. As you get comfortable with AD PowerShell, I highly recommend that you start tuning for less data to be returned - the "filter left, format right" model described here by Don Jones.

This command is filtering all computers for all their properties. It then feeds the data (using that pipe symbol) into a formatted table. The only attributes that the table contains are the computer name, operating system description, service pack, and OS version. It also automatically sizes and wraps the data. When run, I see:

It looks like I have some work to do here – one Windows Server 2003 computer needs Service Pack 2 installed ASAP . And I still have a Windows 2000 server that is going to move quickly and replace that server.
Server Filtering
Now I start breaking down the results with filters. I run:

I have changed my filter to find all the computers that are running “Windows Server something ”, using the –like filter. And I stopped displaying the OS version data because it was not providing me anything unique (yet!).

Cool, now only servers are listed! But wait… where’d my Windows 2000 server go? Ahhhh… sneaky. We didn’t start calling OS’s “Windows Server” until 2003. Before that it was “Windows 2000 Server”. I need to massage my filter a bit:

See the difference? I just added an extra asterisk to surround “Server”.

As you can see, my environment has a variety of Windows server versions running. I’m interested in the ones that are running Windows Server 2008 or Windows Server 2008 R2. And once I have that, I might just want to see the R2 servers – I have an upcoming DFSR clustering project that requires some R2 computers. I run these two sets of commands:

Starting to make sense? Repetition is key; hopefully you are following along with your own servers.
Workstation Filtering
Okeydokey, I think I’ve got all I need to know about servers – now what about all those workstations? I will simply switch from - Like to -Notlike with my previous server query:

Family filtering
By now these filters should be making more sense and PowerShell is looking less scary. Let’s say I want to filter by the “family” of operating system. This can be useful when trying to identify computers that started having a special capability in one OS release and all subsequent releases, and where I don’t care about it being server or workstation. An example of that would be BitLocker – it only works on Windows Vista, Windows Server 2008, and later. I run:

See the change? I am now filtering on operating system version, to be equal to or greater than 6. This means that any computers that have a kernel version of 6 (Vista and 2008) or higher will be returned:

If I just wanted my Windows Server 2008 R2 and Windows 7 family of computers, I can change my filter slightly:

Getting it all into a file


So what we’ve done ‘til now was just use PowerShell to send goo out to the screen and stare. In all but the smallest domains, though, this will soon get unreadable. I need a way to send all this out to a text file for easier sorting, filtering, and analysis.

This is where Export-CSV comes in. With the chaining of an additional pipeline I can find all the computers, select the attributes I find valuable for them, then send them into a comma-separated text file that is even able to read the weirdo UTF-8 trademark characters that lawyers sometimes make us put in AD.

Hey, what do you call a million lawyers at the bottom of the ocean? A good start! Why don’t sharks eat lawyers? Professional courtesy! What do have when a lawyer is buried up to his neck in sand? Not enough sand! Haw haw… anyway:

Then I just crack open the AllWindows.CSV file in Excel and: 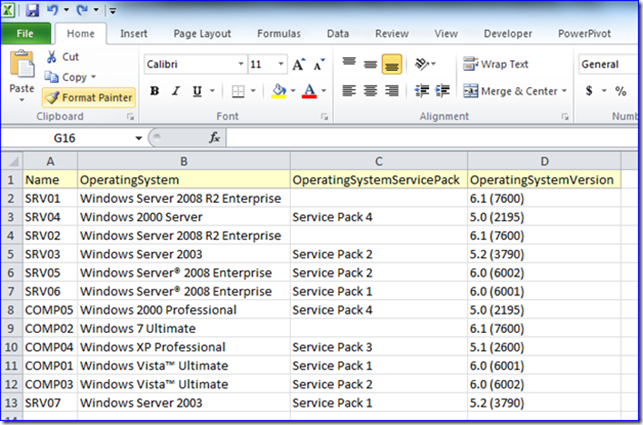 What about the whole forest?


You may be tempted to take some of the commands above and tack on the necessary arguments to search the entire forest. This means adding:


That way you wouldn’t have to connect to a DC in every domain for the info – instead you’d just ask a single GC. Unfortunately, this won’t work ; none of the operating system attributes are replicated by global catalog servers. Oh well, that’s not PowerShell’s fault. All the data must be pulled from domains individually, but that can be automated – I leave that to you as a learning exercise.


The point I made above about support lifecycle is no joke: 2010 is a very important year for a lot of Windows products’ support:


Hopefully these simple PowerShell commands make hunting down computers a bit easier for you.