Turn on suggestions
Auto-suggest helps you quickly narrow down your search results by suggesting possible matches as you type.
Showing results for
Show  only  | Search instead for
Did you mean:
Getting Over Replmon
By


Ned here again. The AD Replication Monitor utility ( Replmon.exe ) was introduced with the Windows Server 2000 Support Tools many years ago as a GUI mechanism for performing certain DC admin tasks. With the release of Window Server 2008 Replmon was not included and we stopped making add-on Support Tools. Every few weeks someone asks me ‘where do I download the Windows Server 2008 version of Replmon? Nowhere. It’s done. Buried. Gone. Kaput. If you want it, you must run the old Windows Server 2003 version. Today I will talk about moving on with its supported replacement, Repadmin.exe.


Replmon grew out of the need for a more useful tool than the AD Sites and Services snap-in ( dssites.msc ). DS Sites offered only a basic view of the topology, and had very limited options for forcing replication or seeing errors in the topology. 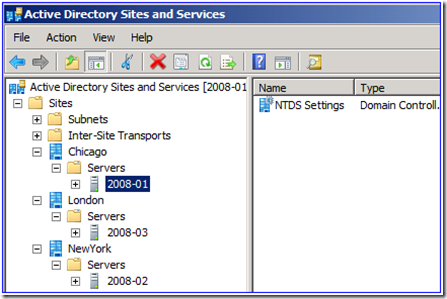 On the other hand, Replmon exposed more information and had a deeper view into the AD partitioning structure. It was designed not by the Windows Product Group but rather by an engineer in PSS. Like all Support Tools, it was not truly supported but instead provided ‘AS IS’. 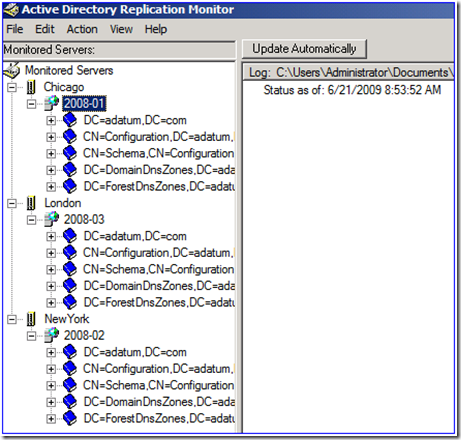 Replmon gave an administrator the ability to quickly force replication, get basic status reports, and see information about the environmental configuration. 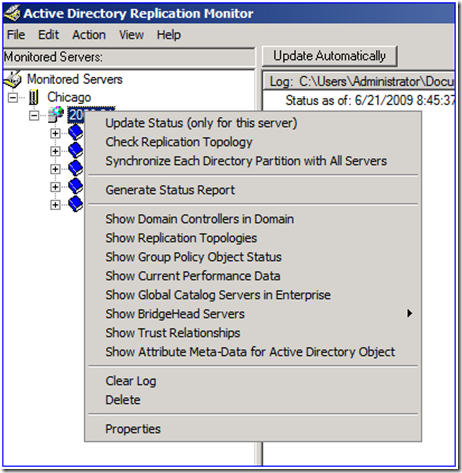 It was also written in a graphical format rather than a command-line interface. When Active Directory was first released 10 years ago, most tools were given more attention in their GUI rather than command-line versions. Customers were already overwhelmed with the radical changes of AD over NT and having a GUI was a highly desirable feature for a complex and not well-understood product like Active Directory.


Now AD is as ubiquitous as Windows in most customer environments. Windows administrators are much more comfortable with the command-line, and that’s great – because repadmin.exe is now equal or superior to Replmon. Don’t believe me? Let’s compare.


Moving On with Repadmin Syncall


The most common operation with Replmon was to have it ”push” AD replication outbound from a given DC where someone had made a change and wanted it to propagate quickly to all partners. I put ”push” in quotes because AD replication is always pull-based; there is no such thing as push. What Replmon was actually doing was contacting the partner DCs and telling them to replicate inbound immediately. To do this you would:


3. Right click the DC or partition and choose Synchronize to force replication.


4. Select if you wanted to pull or push, cross AD sites or not, and disable transitivity or not. 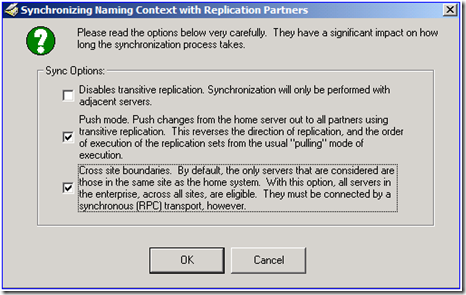 Then you waited for it to finish. There were no immediate results to view, and you weren’t always going to see useful messages when something was shown at all. The only progress was a small status bar:

If there was a problem you would get an error, but it could be misleading. For example, here is the error you get when forcing replication of the Domain partition and one of the DCs is offline for maintenance :

Now contrast this with the Repadmin.exe steps for the same server, doing a push replication of all partitions:

By running a repadmin /syncall with the / A (ll partitions) P (ush) e (nterprise, cross sites) d (istinguished names) parameters, you have duplicated exactly what Replmon is doing. Except that you did it in one step, not many. And with the benefit of seeing immediate results on how the operations are proceeding. If I am running it on the DC itself, I don’t even have to specify the server name. 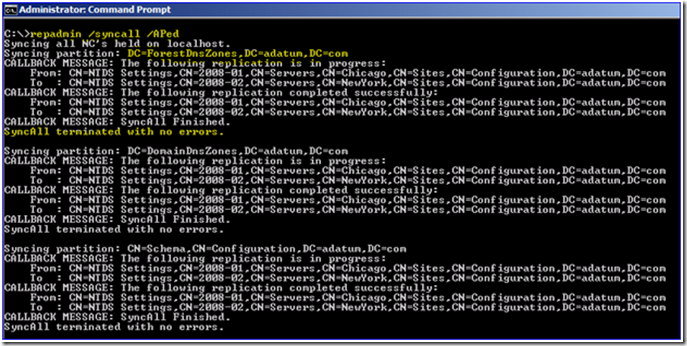 What about the situation I showed earlier where one of the DCs was offline for maintenance? In this case I am going to have Repadmin synchronize just the Domain partition, pushing across site boundaries:

With Repadmin we get a much more specific error:

Those are legitimate errors that are documented and can be researched.


Replmon had the option to generate a status report text file. It could tell you which servers were configured to replicate with each other, if they had any errors, and so on. It was pretty useful actually, and one of the main reasons people liked the tool.


Repadmin.exe offers similar functionality within a few of its command line options. For example, we can get a summary report:

Several DCs have been taken offline. Repadmin shows the correct error of 58 – that the other DCs are not available and cannot tell you their status.


You can also use more verbose commands with Repadmin to see details about which DCs are or are not replicating: 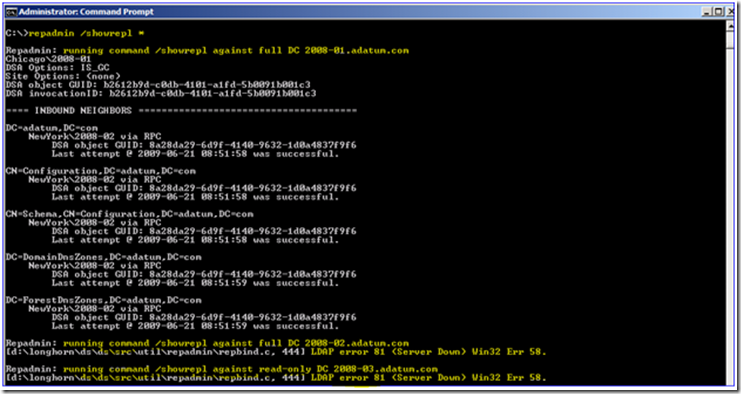 If you want to generate a ‘repadmin status report’ that generates a bunch of useful status information, give this simple batch file a try:

Copy and paste into notepad , save as a CMD file and run it with a server name, a partial server name with wildcards, or an asterisk. It supports whatever Repadmin supports.


So to get data from one server, like with Replmon:

Or to get data from all DC’s (which Replmon cannot do):

Or to get data from all servers that have names starting with “SANFRAN“:

It will output to a text file called replreport.txt . Anything Repadmin can do, you can do in this batch file.

Repadmin can do even more for monitoring. Such as:


Tell you the last time your DCs were backed up, by reading the DSASignature attribute from all servers:

Or output all replication summary information from all DCs to a CSV format that you can open in a spreadsheet or database. Here I’ve brought my DCs back online and replicated any pending changes. Then I get a replication report:

Or you can see what your replication backlog is currently in the queue, like here:

Neat right? That’s a user I created while the other DC was offline, in the list of pending changes. I snipped out another long list of changes that were also pending. Pretty useful to see if a DC that has not been replicating for a while is worth spending time trying to fix or is better off demoting.


Repadmin has plenty of other secrets you can use for monitoring, administering, and troubleshooting – most of which Replmon cannot do:


Need to see all the help?


Help and examples for every parameter- Repadmin /?: Your specific parameter here


Repadmin may not be as pretty as Replmon or Dssites.msc, but it is far more powerful than both of those utilities combined. Being an AD administrator brings a lot of responsibility – you are accountable for identity management, authentication, authorization, and general network availability for your entire company. You owe it to yourself to learn and use AD’s most powerful tools, even if they don’t support a mouse.


Update July 2 2009: One of our readers also points out that we have an excellent whitepaper on using Repadmin to troubleshoot problems.