Turn on suggestions
Auto-suggest helps you quickly narrow down your search results by suggesting possible matches as you type.
Showing results for
Show  only  | Search instead for
Did you mean:
Friday Mail Sack: Guest Reply Edition
By


We plan to migrate our Certificate Authority from single-tier online Enterprise Root to two-tier PKI. We have an existing smart card infrastructure. TechNet docs don’t really speak to this scenario in much detail.


1. Does migration to a 2-tier CA structure require any customization?


We covered this topic in a blog post, and it should cover many of your questions: http://blogs.technet.com/b/askds/archive/2010/08/23/moving-your-organization-from-a-single-micr... .


Aside from that post, you will also find the following information helpful: http://blogs.technet.com/b/pki/archive/2010/06/19/design-considerations-before-building-a-two-t... .


Are there any know issues with P2Ving ADAM/AD LDS servers?


No problems as far as we know. The same rules apply as P2V’ing DCs or other roles; make sure you clean up old drivers and decommission the physicals as soon as you are reasonably confident the virtual is working. Never let them run simultaneously. All the “I should have had a V-8” stuff.


Considering how simple it is to create an ADLDS replica, it might be faster and "cleaner" to create a new virtual machine, install and replicate ADLDS to it, then rename the guest and throw away the old physical; if ADLDS was its only role, naturally.


When using production delegation in AGPM, we can grant permissions for editing group policy objects in the production environment. But these permissions will be written to all deployed GPOs, not for specific ones. GPMC makes it easy to set “READ” and “APPLY” permissions on a GPO, but I cannot find a security filtering switch in AGPM. So how can we manage the security filtering on group policies without setting the same ACL on all deployed policies?


Ok, granting “READ” and “APPLY” permissions respectively managing security filtering in AGPM is not that obvious to find. Do it like this in the change control panel of AGPM: 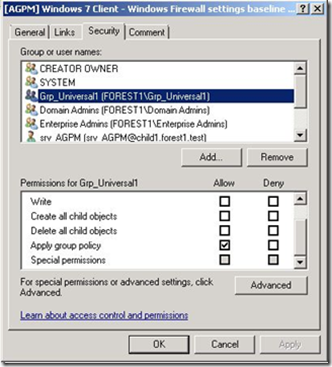 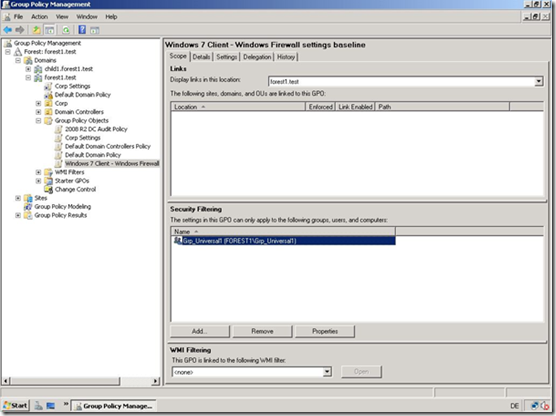 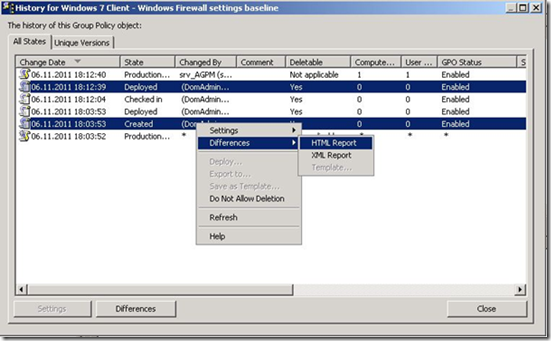 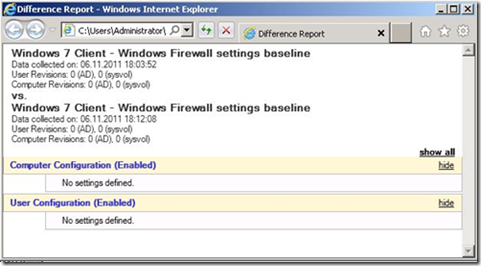 Note 2 : Be careful with “DENY” ACEs using AGPM – they might get removed. See the following blog for more information on that topic: http://blogs.technet.com/b/grouppolicy/archive/2008/10/27/agpm-3-0-doesnt-preserve-all-the-deny...


I have one Windows Server 2003 IIS machine with two web applications, each in its own application pool. How can I register SPNs for each application?


[This one courtesy of Rob Greene , the Abominable Authman - Editor]


There are a couple of options for you here.


Comparing AGPM controlled GPOs within the same domain is no problem at all – but if the AGPM server serves more than one domain, how can I compare GPOs that are hosted in different domains using AGPM difference report?


[Again from Fabian , who was really on a roll last week - Editor]


Since AGPM 4.0 we provide the ability to export and import Group Policy Objects using AGPM. What you have to do is: 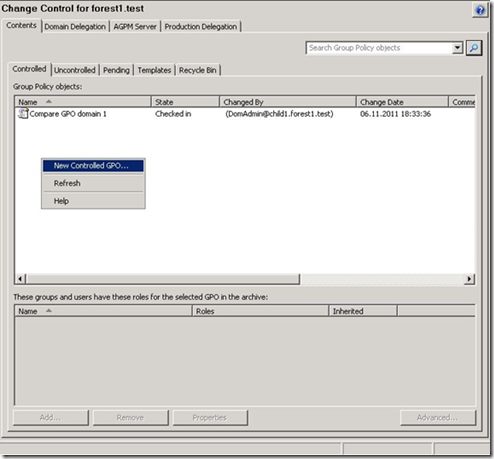 [Woo, finally some from Ned - Editor]


When I use the Windows 7 (RSAT) version of AD Users and Computers to connect to certain domains, I get error "unknown user name or bad password". However, when I use the XP/2003 adminpak version, no errors for the same domain. There's no way to enter a domain or password.


ADUC in Vista/2008/7/R2 does some group membership and privilege checking when it starts that the older ADUC never did. You’ll get the logon failure message for any domain you are not a domain admin in, for example. The legacy ADUC is probably broken for that account as well – it’s just not telling you.


I have 2 servers replicating with DFSR, and the network cable between them is disconnected. I delete a file on Server1, while the equivalent file on Server2 is modified. When the cable is re-connected, what is the expected behavior?


Is there any automatic way to delete stale user or computer accounts? Something you turn on in AD?


Nope, not automatically; you have to create a solution to detect the age and disable or delete stale accounts. This is a very dangerous operation - make sure you understand what you are getting yourself into. For example:


Whenever I try to use the PowerShell cmdlet Get-ACL against an object in AD, always get an error like " Cannot find path ou=xxx,dc=xxx,dc=xxx because it does not exist". But it does!


After you import the ActiveDirectory module, but before you run your commands, run:

Get-Acl won’t work until you change to the magical “active directory drive”.


I've read the Performance Tuning Guidelines for Windows Server , and I wonder if all SMB server tuning parameters (AsyncCredits, MinCredits, MaxCredits, etc) also work (or help) for DFSR.  Also, do you know the limit is for SMB Asynchronous Credits - the document doesn’t say?


Nope, they won’t have any effect on DFSR – it does not use SMB to replicate files. SMB is only used by the DFSMGMT.MSC if you ask it to create a replicated folder on another server during RF setup. More info here:

Configuring DFSR to a Static Port - The rest of the story - http://blogs.technet.com/b/askds/archive/2009/07/16/configuring-dfsr-to-a-static-port-the-rest...


As KB938475 ( http://support.microsoft.com/kb/938475 ) points out, adjusting these defaults comes at the cost of paged pool (Kernel) memory. If you were to increase these values too high, you would eventually run out of paged pool and then perhaps hang or crash your file servers. So don't go crazy here.


There is no "right" value to set - it depends on your installed memory, if you are using 32-bit versus 64-bit (if 32-bit, I would not touch this value at all), the number of clients you have connecting, their usage patterns, etc. I recommend increasing this in small doses and testing the performance - for example, doubling it to 1024 would be a fairly prudent test to start.


Happy Birthday to all US Marines out there, past and present. I hope you're using Veterans Day to sleep off the hangover. I always assumed that's why they made it November 11 th , not that whole WW1 thing.


Also, happy anniversary to Jonathan, who has been a Microsoft employee for 15 years. In keeping with the tradition, he had 15 pounds of M&Ms for the floor, which in case you’re wondering, it fills a salad bowl. Which around here, means: 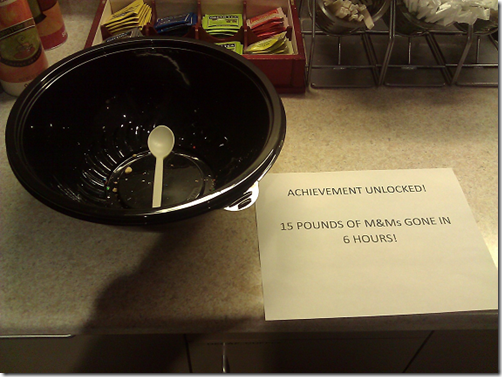 Two of the most awesome things ever – combined:


A great baseball story about Lou Gehrig, Kurt Russell, and a historic bat.


Off to play some Battlefield 3 . No wait, Skyrim . Ah crap, I mean Call of Duty MW3 . And I need to hurry up as Arkham City is coming. It's a good time to be a PC gamer. Or Xbox , if you're into that sorta thing.

Have a nice weekend folks,


- Ned "and Jonathan and Kim and Fabian and Rob" Pyle