Turn on suggestions
Auto-suggest helps you quickly narrow down your search results by suggesting possible matches as you type.
Showing results for
Show  only  | Search instead for
Did you mean:
Fine-Grained Password Policy and “Urgent Replication”
By

So as long as the connection between the DC’s had Change Notification enabled, changing one of these special data types “urgently” replicated that change to immediately connected partners. Ordinarily this just meant DC’s in your own site, unless you have configured Inter-Site Change Notification on your Site Links. This is the part that confused most folks: urgent replication isn’t so much for security as for consistency . By default, these “urgent” changes might take a few hours or days to transitively reach outlying DC’s but maybe you don’t care because the end user experience would be consistent within every AD site.

Suspiciously absent from the documentation though: Fine-Grained Password Policies . Does this mean that we didn’t update this old article, or that FGPP’s don’t count for urgent replication? After all, FGPP has account and password policies out the wazoo, that’s the whole point of them.
Figuring it out
When I first thought about writing this this article I figured I’d just look at source code, get an answer, make a three line blog post and be on my way. Except that unlike me, you don’t have that source code privilege, so that’s not super helpful. Instead I’ll show you how to determine the behavior yourself; it may be helpful in other scenarios someday.

1. You will be making changes on the PDC Emulator DC. You will also need to pick out a DC that directly replicates inbound from the PDCE within the same AD Site. Obviously, you better create a FGPP in this test domain you are using; it doesn’t need to be assigned to anyone. If you’re using Windows Server 2008 R2 you can load up PowerShell and quickly create a password settings object with:


3. Pick some trivial object on the PDCE to modify (I change a user’s "Description" attribute). Use repadmin.exe /showmeta to see what its current USN is for that description attribute: 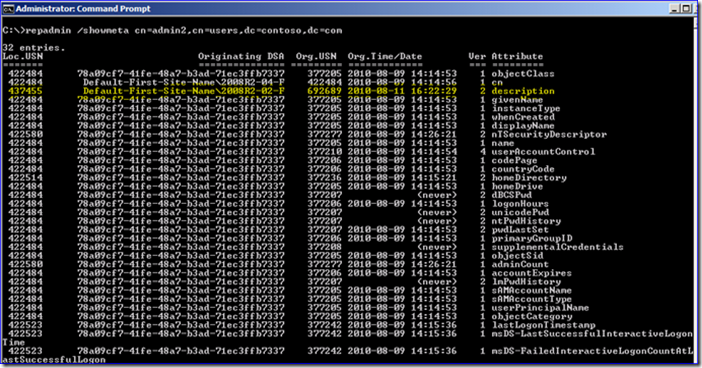 4. Change the description. After 15 seconds the change replicates to the downstream partner DC: 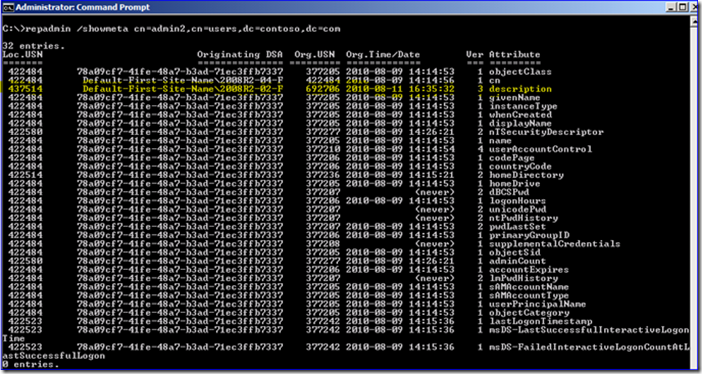 5. If you look in the Directory Services event log on my downstream server, you can also see that there was a USN update as a 1364 event, from the old USN to the new one. So in my example above, the old USN was 692689 and the new one is 692706. There is also a 1412 event, more on that later. The event log reflects this also with my USN vector raising exactly 15 seconds after the originating time: 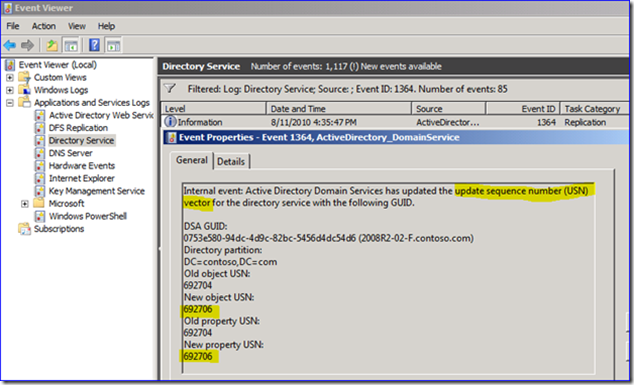 Note: I am using Hyper-V guests here so I have perfect time sync. You may not be this fortunate in your lab. :)

6. Now you change one of the known “urgent replication” settings. For example, the account lockout threshold: 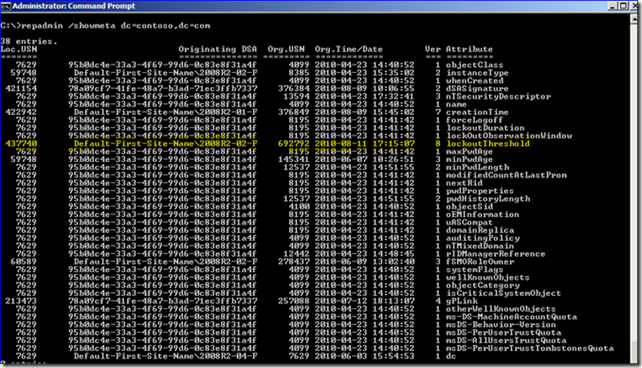 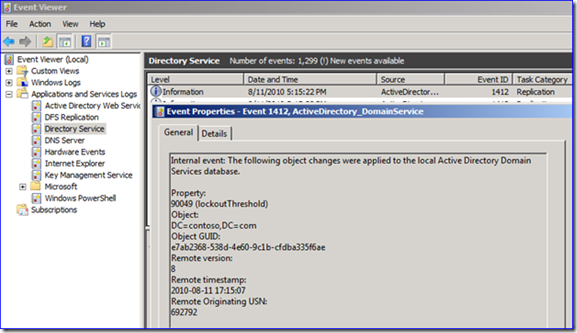 
8. So now we’re pretty confident that getting a 1364 means normal replication and not getting one means urgent replication. So back to the original question – does FGPP follow urgent change replication? Find out: change an FGPP PSO to alter its settings for account lockout threshold. 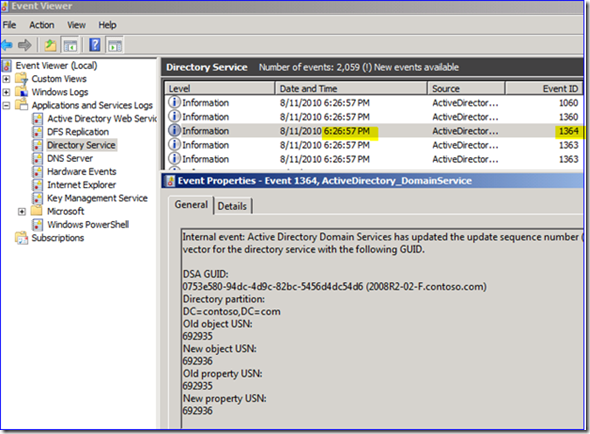 As you can see, FGPP does not use urgent replication. It is treated just like everyone else and showed up roughly 15 seconds later.

Back when Windows 2000 Active Directory was released we were paralyzed with fear that replication traffic would overwhelm networks with massive RPC data storms and everyone would hate us. So Win2000 DC’s took 5 minutes for even intra -site replication to catch up between DC’s. What we found was that replication was low bandwidth already and customers weren’t changing that much data – but when they did change data, they wanted it on all DC’s faster. So intra-site replication became 15 seconds in Win2003 and we started telling everyone through Support cases, MCS engagements , and PFE ADRAPS to turn on change notification inter-site also. This so-called “urgent replication” mechanism was designed to quickly catch up servers for “more important” changes. But since now everything happens in a few seconds it’s mostly pointless overkill and urgent replication no longer gets any new lovin’.

So there you go.