Turn on suggestions
Auto-suggest helps you quickly narrow down your search results by suggesting possible matches as you type.
Showing results for
Show  only  | Search instead for
Did you mean:
Domain Locator Across a Forest Trust
By

Domain Locator Across a Forest Trust


Rob and Mike here. We're asked, many times, why a user does not authenticate against a local domain controller in the same site when logging on across a forest. We've setup the most common scenario to help explain how domain locator works for user logons across a forest. 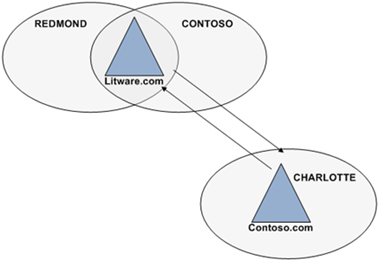 
Users from litware.com logon to a terminal server existing in the contoso.com forest. However, Users experience a slower-than-usual logon, and the LOGONSERVER environment variable shows the name of a remote domain controller in the REDMOND site rather than the domain controller from the CONTOSO site.


However, administrators from the litware.com domain expect users from their domain (logging on contoso.com terminal servers) to authenticate using the domain controller located in the CONTOSO site. The CONTOSO site is the same physical locations as the terminal server. Authentication should occur in the local site and should be fast, right?

IMPORTANT :
The computer determines the site name using a domain of which the computer is a member—not the user's domain. This determination occurs during computer startup—not during user logon. Microsoft Support article 939252 ( http://support.microsoft.com/default.aspx?scid=kb;EN-US;939252 ) describes how you can change this behavior


Here’s how it works: Windows first performs a DNS query to find a _ldap SRV record for the computer's current site, but using the domain name selected from the CTRL+ALT+DEL sequence – the domain name of the user . An example looks like:

The DNS server responds indicating a record by that name is not found. Windows then attempts to find any domain controller within the user's domain. Windows accomplishes this by removing the site name from the DNS query. The example similar to the one above:

NOTE :
The Netlogon service of a domain controller is responsible for dynamically registers the _ldap service resource records with its configured DNS server. This registration includes the site specific and domain specific _ldap records.

Our scenario involves a terminal server, which allows multiple users sessions. This is a great way to take network captures of user logon related issues by sing one of the logon sessions to take the network capture. It is always best to clear the DNS and NetBIOS name caches before starting a network capture. This ensures the network capture includes name resolution. You can clear these caches by using IPConfig /FlushDNS and NbtStat –R from a command window (under an elevated command prompt for Server 2008 and Vista).


Here is a snippet of the output of the network capture.


The results of the network capture show the domain controller locator attempts to locate a domain controller in the site with the same name as the site of the computer; but in the user's domain (frame 3). The DNS server responds with no such name. This is correct. The Litware.com forest has only two sites: REDMOND and CONTOSO. Frame 4 queries for an SRV record a second time; however, this time the query does not include the site name of the computer ( _ ldap._tcp.dc.msdcs.litware.com ). The DNS response provides a positive answer to the second query. The answer includes a _ldap record for each domain controller in the litware.com domain (the user's domain). 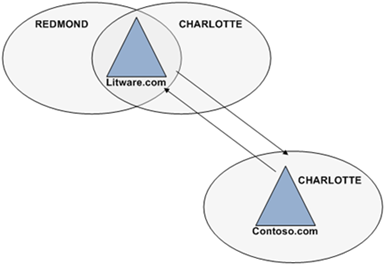 
Let's take another network trace of a litware.com domain user logon from the terminal server in the contoso.com domain.