Turn on suggestions
Auto-suggest helps you quickly narrow down your search results by suggesting possible matches as you type.
Showing results for
Show  only  | Search instead for
Did you mean:
Digging a little deeper into Windows 8 Primary Computer
By


[This is a ghost of Ned past article – Editor]


Hi folks, Ned here again to talk more about the Primary Computer feature introduced in Windows 8. Sharp-eyed readers may have noticed this lonely beta blog post and if you just want a set-by-step guide to enabling this feature, TechNet does it best . Today I am going to fill in some blanks and make sure the feature's architecture and usefulness is clear. At least, I'm going to try.


Businesses using Roaming User Profiles, Offline Files and Folder Redirection have historically been limited in controlling which computers cache user data. For instance, while there are group policies to assign roaming profiles on a per computer basis, they affect all users of that computer and are useless if youassign roaming profiles through legacy user attributes.


Windows 8 introduces a pair of new per-user AD DS attributes to specify a "primary computer." The primary computer is the one directly assigned to a user - such as their laptop, or a desktop in their cubicle - and therefore unlikely to change frequently. We refer to this as "User-Device Affinity". That computer will allow them to store roaming user data or access redirected folder data, as well as allow caching of redirected data through offline files. There are three main benefits to using Primary Computer:

By assigning computer(s) to a user then applying some group policies, you ensure data only roams or caches where you want it. 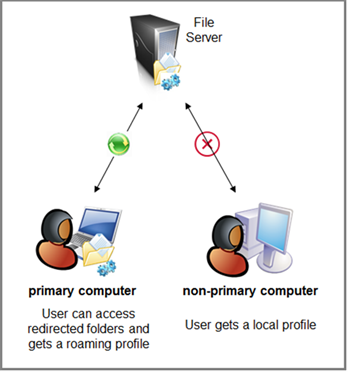 Yoink, stolen screenshot from a much better artist


Primary Computer has the following requirements:


There is no attribute in Active Directory that tracks which computers a user logs on to, much less the computers they log on to the most frequently. There are a number of out of band options to determine computer usage though:


A user may have more than one computer they logon to regularly though and if that's the case, an AD attribute-based storage solution is probably not the right answer unless the script builds a circular list with a restricted number of entries and logic to ensure it does not update with redundant data. Otherwise, there could be excessive AD replication. Remember, this is just a simple example to get the creative juices flowing.


As I mentioned before, look at TechNet for some DSAC step-by-step for setting the msDS-PrimaryComputer attribute and the necessary group policies. However, if you want to use native Windows PowerShell instead of our interesting out of band module , here are some more juice-flow inducing samples.


The ActiveDirectory Windows PowerShell module get-adcomputer and set-aduser cmdlets allow you to easily retrieve a computer's distinguished name and assign it to the user's primary computer attribute. You can use assigned variables for readability, or with nested functions for simplicity.


For example, with a computer named cli1 and a user name stduser :


For example, with that same user and computer:


If you use AD DS to store the user's last computer in their Comment attribute as part of a logon script - like described in the earlier section - here is an example that reads the stduser attribute Comment and assigns primary computer based on the contents:

If you wanted to assign primary computers to all of the users within the Foo OU based on their comment attributes, you could use this example:

If you have a CSV file that contains the user accounts and their assigned computers as DNs, you can use the import-csv cmdlet to update the users. For example:

This is particularly useful when you have some asset history and assign certain users specific computers. Certainly a good idea for insurance and theft prevention purposes, regardless.


Enabling Primary Computer does not remove any data already cached on other computers that a user does not access again. I.e. if a user was already using Roaming User Profiles or Folder Redirection (which, by default, automatically adds all redirected shell folders to the Offline Files cache), enabling Primary Computer means only that further data is not copied locally to non-approved computers.


In the case of Roaming User Profiles, several policies can clear data from computers at logoff or restart:

In the case of Folder Redirection and Offline Files, there is no specific policy to clear out stale data or delete cached data at logoff like there is for RUP, but that's immaterial:

In both cases, once the data is unpinned from the Offline Files cache, it will evict from the computer in the background after 15 minutes. 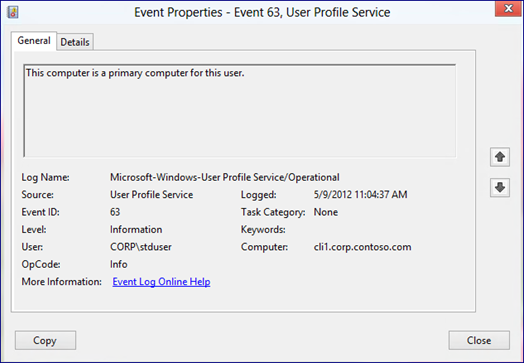 The new User Profile Service events for Primary Computer are all in the Operational event log:

To see that the Redirect folders on primary computers only policy took effect and the behavior at each user logon, examine the Folder Redirection operational event log for Event 1010. This will state "This computer is not a primary computer for this user" or if it is (good catch, Johan from Comments) 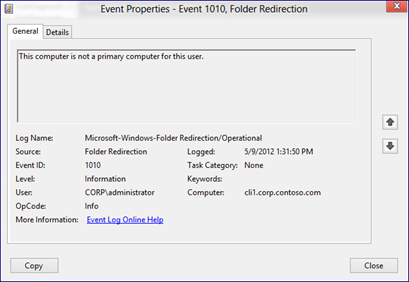 
Primary Computer is a client-side feature; no matter what you configure in Active Directory or group policy on domain controllers, Windows 7, Windows Server 2008 R2, and older family computers will not obey the settings.


The processing of this new functionality is:


Because this feature is both new and simple, most troubleshooting is likely to follow this basic workflow when Primary Computer is not working as expected:

The logs of note for troubleshooting Primary Computer are:


Likewise, your company may not be internally aware of Primary Computer deployments and may send you down a rat hole troubleshooting expected behavior. Always ensure that a "problem" with folder redirection or roaming user profiles isn't just another group within the customer's company configuring Primary Computer and not telling you (this applies to you too; send a memo, dangit!).


Ned "shouldn't we have called it 'Primary Computers?'" Pyle