Turn on suggestions
Auto-suggest helps you quickly narrow down your search results by suggesting possible matches as you type.
Showing results for
Show  only  | Search instead for
Did you mean:
ADAMSync 101
By


Hi Everyone, Kim Nichols here again, and this time I have an introduction to ADAMSync. I take a lot of cases on ADAM and AD LDS and have seen a number of problems arise from less than optimally configured ADAMSync XML files. There are many sources of information on ADAM/AD LDS and ADAMSync (I'll include links at the end), but I still receive lots of questions and cases on configuring ADAM/AD LDS for ADAMSync.


We'll start at the beginning and talk about what ADAM/AD LDS is, what ADAMSync is and then finally how you can get AD LDS and ADAMSync working in your environment.


AD LDS uses the concept of instances, similar to that of instances in SQL. What this means is one AD LDS server can run multiple AD LDS instances (databases). This is another differentiator from Active Directory: a domain controller can only be a domain controller for one domain. In AD LDS, each instance runs on a different set of ports. The default instance of AD LDS listens on 389 (similar to AD).


Here's some more information on AD LDS if you're new to it:


In many scenarios, you may want to store user data in AD LDS that you can't or don't want to store in AD. Your application will point to the AD LDS instance for this data, but you probably don't want to manually create all of these users in AD LDS when they already exist in AD. If you have Forefront Identity Manager (FIM), you can use it to synchronize the users from AD into AD LDS and then manually populate the AD LDS specific attributes through LDP, ADSIEdit, or a custom or 3rd party application. If you don't have FIM, however, you can use ADAMSync to synchronize data from your Active Directory to AD LDS.


It is important to remember that ADAMSync DOES NOT synchronize user passwords! If you want the AD LDS user account to use the same password as the AD user, then userproxy transformation is what you need. (That's a topic for another day, though. I'll include links at the end for userproxy.)


ADAMSync uses an XML file that defines which data will synchronize from AD to AD LDS. The XML file includes the AD partition from which to synchronize, the object types (classes or categories), and attributes to synchronize. This file is loaded into the AD LDS database and used during ADAMSync synchronization. Every time you make changes to the XML file, you must reload the XML file into the database.


In order for ADAMSync to work:

The best advice I can give regarding ADAMSync is to keep it as simple as possible to start off with. The goal should be to get a basic XML file that you know will work, gradually add attributes to it, and troubleshoot issues one at a time. If you try to do too much (too wide of object filter or too many attributes) in the XML from the beginning, you will likely run into multiple issues and not know where to begin in troubleshooting.


Let's take a look at the default XML file that Microsoft provides and go through some recommendations to make it more efficient and less prone to issues. The file is named MS-AdamSyncConf.XML and is typically located in the %windir%\ADAM directory.


Let's go through the default XML file by number and talk about what each section does, why the defaults are what they are, and what I typically recommend when working with customers.


OK! That was fun, wasn't it? Now that we have an XML file, how do we use it? This is covered in a lot of different materials, but the short version is we have to install it into the AD LDS instance. To install the file, run the following command from the ADAM installation directory (%windir%\ADAM):


The command above assumes you are running it on the AD LDS server, that the instance is running on port 389 and that the XML file is located in the path of the adamsync command.


What does this do exactly, you ask? The adamsync install command copies the XML file contents into the configurationFile attribute on the AD LDS application partition head. You can view the attribute by connecting to the application partition via LDP or through ADSIEdit. This is a handy thing to know. You can use this to verify for certain exactly what is configured in the instance. Often there are several versions of the XML file in the ADAM directory and it can be difficult to know which one is being used. Checking the configurationFile attribute will tell you exactly what is configured. It won't tell you which XML file was used, but at least you will know the configuration. 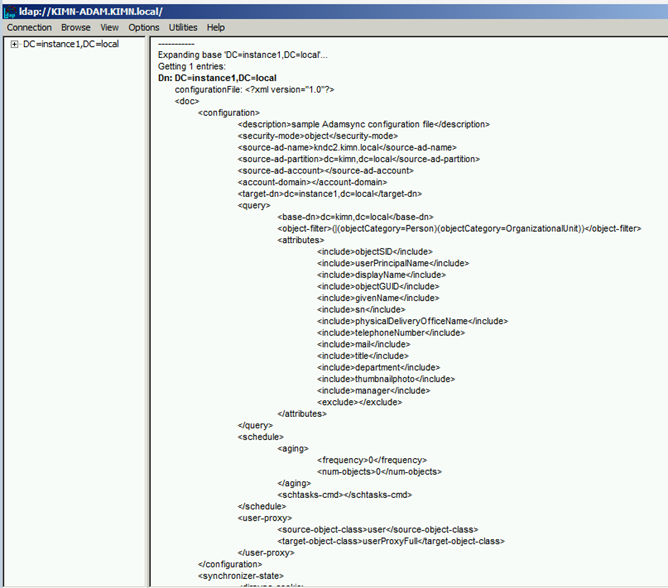 The implication of this is that anytime you update the XML file you must reinstall it using the adamsync /install command otherwise the version in the instance is not updated. I've made this mistake a number of times during troubleshooting!


Finally, we are ready to synchronize! Running the synchronization is the "easy" part assuming we've created a valid XML file, our AD LDS schema has all the necessary classes and attributes, and the source AD data is without issue (duplicate UPN is an example of a known issue).


From the ADAM directory (typically %windir%\ADAM), run the following command:


Again, we're assuming you are running the command on the AD LDS server and that the instance is running on port 389. The DN referenced in the command is the DN of your AD LDS application partition. /log is very important (you can name the log anything you want). You will need this log if there are any issues during the synchronization. The log will tell you which object failed and give you a cryptic "detailed" reason as to why. Below is an example of an error due to a duplicate UPN. This is one of the easier ones to understand.


During the sync, if you are syncing from the Active Directory domain head rather than an OU or container, your objects should begin showing up in the AD LDS instance almost immediately. The objects don't synchronize in any order that makes sense to the human brain, so don't worry if objects are appearing in a random order. There is no progress bar or indication of how the sync is going other than fact that the log file is growing. When the sync completes you will be returned to the command prompt and your log file will stop growing.


As you can see there is nothing on the command line nor are there any events in any Windows event log that indicate that the synchronization was successful. In this context, successful means completed without errors and all objects in scope, as defined in the XML file, were synchronized. The only way to determine if the synchronization was successful is to check the log file. This highlights the importance of generating the log. Additionally, it's a good idea to keep a reasonable number of past logs so if the sync starts failing at some point you can determine approximately when it started occurring. Management likes to know things like this.


Since you'll probably be automating the synchronization (easy to do with a scheduled task) and not running it manually, it's a good idea to set up a reminder to periodically check the logs for issues. If you've never looked at a log before, it can be a little intimidating if there are a lot of objects being synchronized. The important thing to know is that if the sync was successful, the bottom of the log will contain a section similar to the one below:


Updating the configuration file DirSync cookie with a new value.


Conclusion and other References


That covers the basics of setting up ADAMSync! I hope this information makes the process more straight forward and gives you some tips for getting it to work the first time! The most important point I can make is to start very simple with the XML file and get something to work. You can always add more attributes to the file later, but if you start from broken it can be difficult to troubleshoot. Also, I highly recommend using <include> over <exclude> when specifying attributes to synchronize. This may be more work for your application team since they will have to know what their application requires, but it will make setting up the XML file and getting a successful synchronization much easier!


As I mentioned earlier, there are some attributes, classes and object types that ADAMSync will not synchronize. The items listed below are hard-coded not to sync. There is no way around this using ADAMSync. If you need any of these items to sync, then you will need to use LDIFDE exports, FIM, or some other method to synchronize them from AD to AD LDS. The scenarios where you would require any of these items are very limited and some of them are dealt with within ADAMSync by converting the attribute to a new attribute name (objectGUID to sourceObjectGUID).


Naming Context heads, deleted objects, empty attributes, attributes we do not have permissions to read, objectGUIDs (gets transferred to sourceObjectGUID), objects with del-mangeled distinguished names (DEL:\)