Turn on suggestions
Auto-suggest helps you quickly narrow down your search results by suggesting possible matches as you type.
Showing results for
Show  only  | Search instead for
Did you mean:
AD FS 2.0 and AD FS 1.x Interoperability
By


Hi, it’s Adam Conkle again. I am excited about our recent release of AD FS 2.0 on May 5. I wanted to post a blog about AD FS 2.0 and AD FS 1.x interoperability as soon as possible since I think it will be a common scenario for our customers.


AD FS 2.0 and AD FS 1.x interoperability was a priority for this release, and full functionality of AD FS 1.x security token servers (STS) and the Claims-aware Web Agent is supported in AD FS 2.0.


In order to federate between the two versions of AD FS there are some requirements that we need to manually address.

Below, I will describe methods to send claims from AD FS 2.0 which satisfy the AD FS 1.x claim requirements.


We will be extracting several claims from an Attribute Store , and, before we begin, we need to understand where the extractions should take place. You can extract from the Attribute Store either on the Claims Provider (CP) Trust or on the Relying Party (RP) Trust . Both will work; the difference is this:

When you extract using the CP Trust rules, the claims are injected into the policy processing pipeline early in the process. Then, on the RP Trust, we execute the Issuance Authorization Rules and can make RP authorization decisions based on claims that we already have in the pipeline.


When you extract using the RP Trust rules, the claims are injected into the pipeline later in the process, and any Issuance Authorization Rules you have configured for the RP Trust will not apply to claims which are issued here since the authorization rules have already executed.


Let’s go to the AD FS 2.0 STS, and let’s also assume that AD FS 2.0 is the identity provider (IdP) for this federation scenario. We will configure an Acceptance Transform Rule for the Active Directory CP Trust which extracts userPrincipalName from Active Directory as the UPN claim type (URI). Creating this rule on the CP Trust will place the UPN claim into the pipeline prior to any RP Trust rules firing.


When you create this rule, use the Send LDAP Attributes as Claims template in the rule editor. 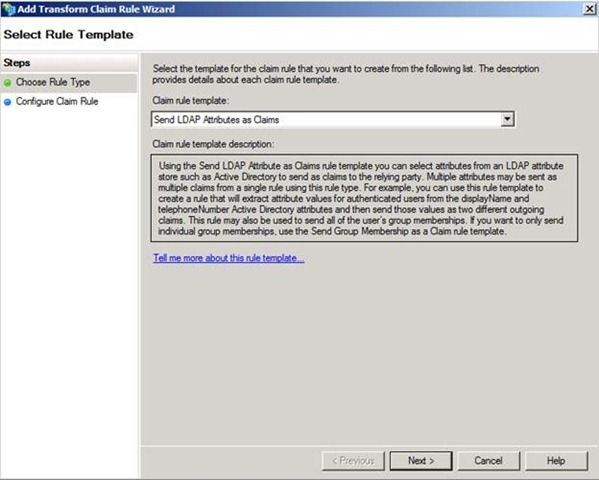 Figure 1 – Selecting a claim rule template to extract from AD


Figure 2 and Figure 3 show a rule named Extract UPN from AD which has been added to the claim rules for the Active Directory CP Trust. 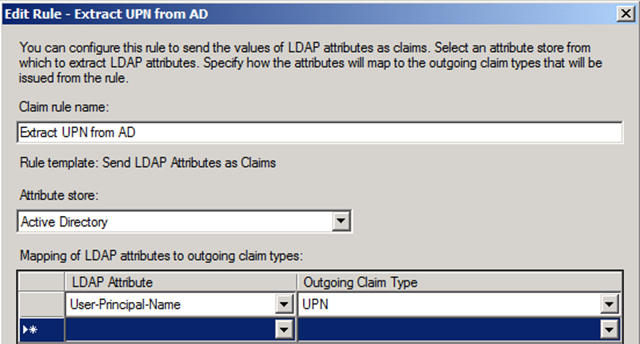 Figure 2 – Configuring the Claim Rule to extract UPN from AD 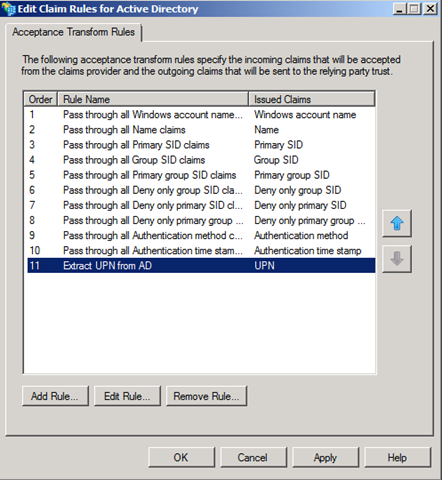 
Now that we have a UPN claim in the pipeline, the next step is to transform this claim into the format that AD FS 1.x requires: Name ID. We perform the transformation with an Issuance Transform Rule on the AD FS 1.x RP Trust.


To create a transformation rule, use the Transform an Incoming Claim template in the rule editor 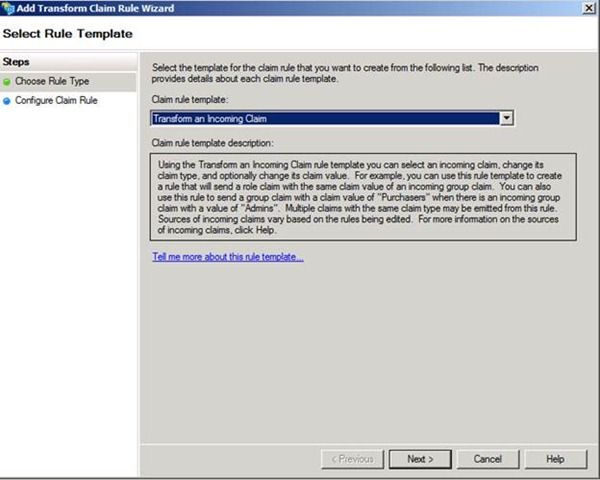 Figure 4 – Selecting a claim rule template to transform a claim 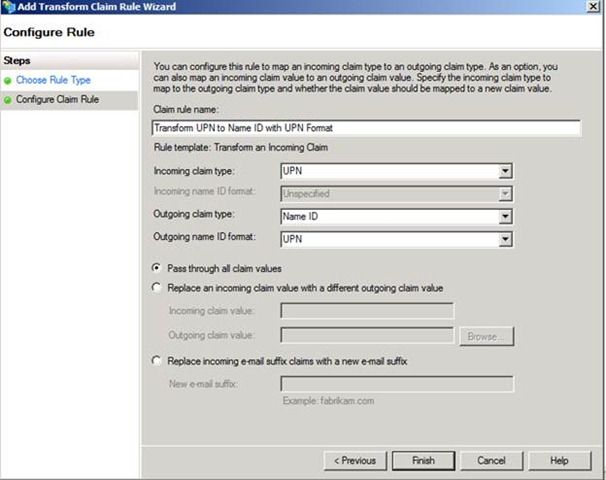 
When a user authenticates to the AD FS 2.0 STS, the UPN will be extracted from AD during execution of the AD CP Trust rules and injected into the pipeline. Next, the processing rules are executed for the AD FS 1.x RP Trust, and UPN will be transformed to Name ID with the UPN format. The value of the user’s UPN is maintained for the outgoing claim to the RP (AD FS 1.x). 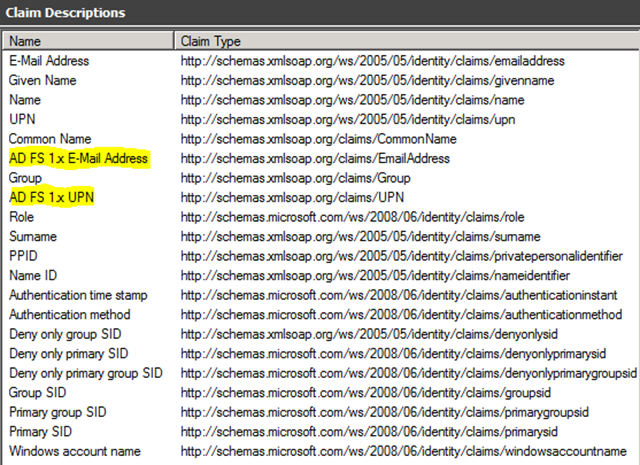 
We simply need to extract them from our Attribute Store (AD, in my case), and send them to the AD FS 1.x RP.


Figure 7 shows how to configure the claim rule to extract UPN and E-Mail as AD FS 1.x UPN and AD FS 1.x E-Mail Address. I have chosen to create this rule on the CP Trust. 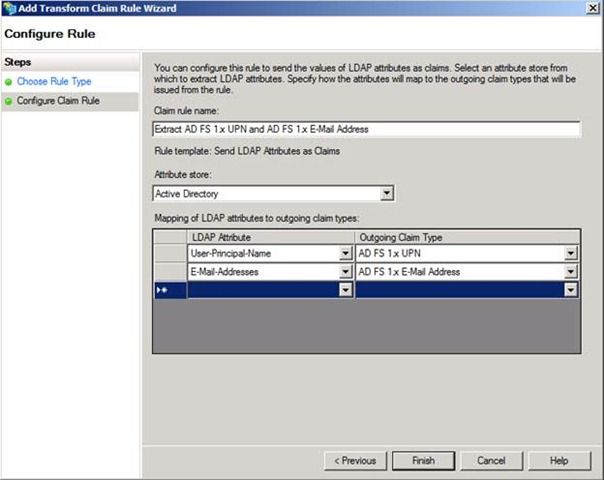 
In Figure 8, I have selected the Pass Through or Filter an Incoming Claim template so I can pass the AD FS 1.x claim types to the AD FS 1.x RP. This rule is created on the RP Trust so that the claims accepted from the AD CP Trust can be passed to the RP. 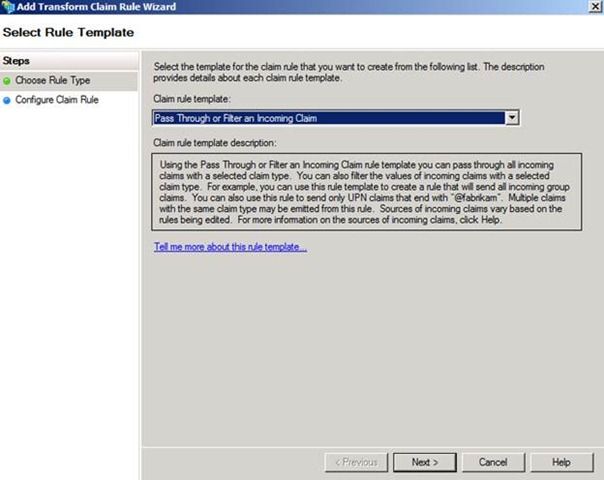 
Finally, in Figure 9, I have configured the rule to Pass through all claim values for the Incoming claim type: AD FS 1.x UPN . You will need to create another set of extraction and pass through rules to handle the AD FS 1.x E-Mail Address or Common Name claim types if you wish to send them. 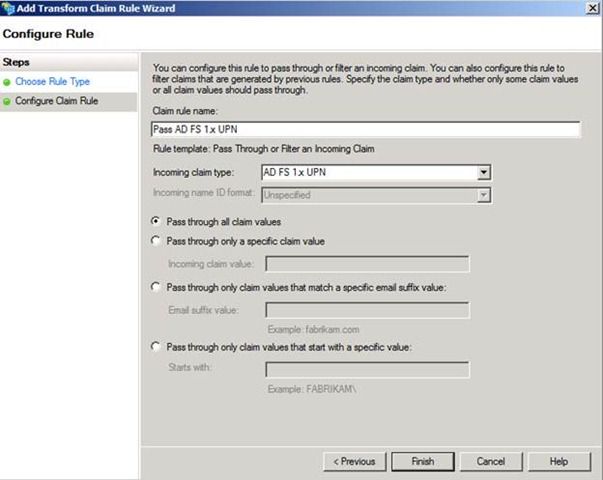 Figure 9 - Configuring a claim rule to pass through the value of the AD FS 1.x UPN claim type


Next, you may need to send Group claims to AD FS 1.x. AD FS 2.0 comes with a built-in Claim Description named Group which has the URI that AD FS 1.x expects for Group Claims. This can be seen on the Claim Descriptions node in the AD FS 2.0 MMC console.


AD FS 2.0 also has a Claim Rule template named Send Group Membership as a Claim which allows you to select a security group, and send a claim based on membership of that group. I have chosen to create this rule on the RP Trust. 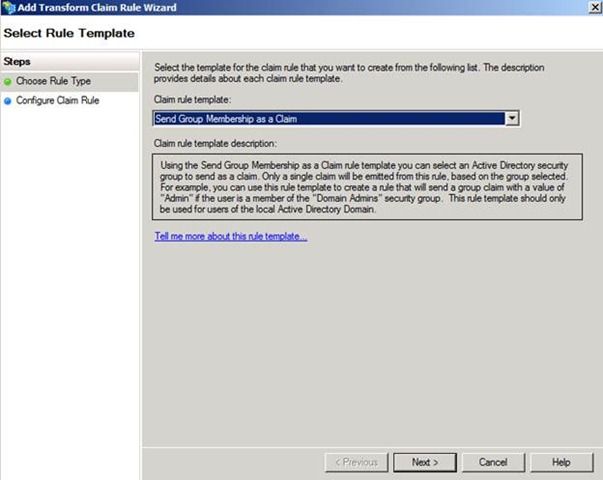 
Now, all we need is the AD FS 1.x Incoming Group Claim Mapping name the AD FS 1.x administrator is expecting on the resource federation server. For our example, let’s call it SharePointUsersMapping . Our rule looks like this: 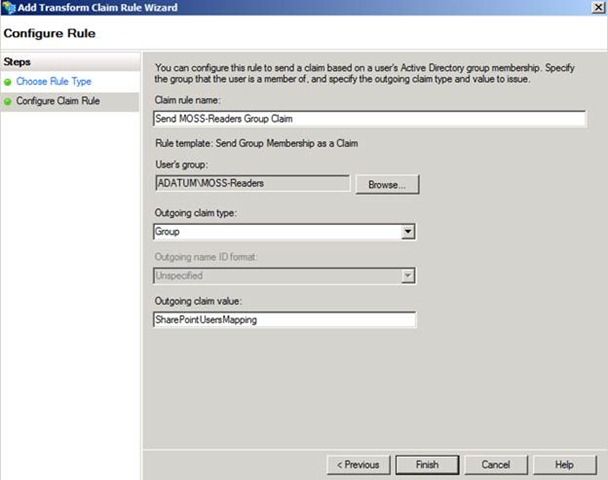 
Since I created my rule on the RP Trust this time, there is no need to create a pass-through rule in order for the claim to be sent to the RP.


We’re on the home stretch now! Finally, we may need to send additional claims to AD FS 1.x which are neither Identity Claims nor Group Claims; they are AD FS 1.x Custom Claims. As an example, I have extended my AD schema to include a user attribute named costCenter . I want to send the users’ cost center as a claim when they authenticate to a resource hosted by my AD FS 1.x partner.

The way the SAML assertion is constructed here is as follows:


1. The full URI of the claim type is passed in


2. Everything after the last “/” in the URI is stripped off of the URI and is used as the AttributeName property


3. Everything before the last “/” in the URI is used as the AttributeNamespace property


Now, run that through the steps above:


2. FirstNameMapping is stripped off of the URI and is used as the AttributeName property 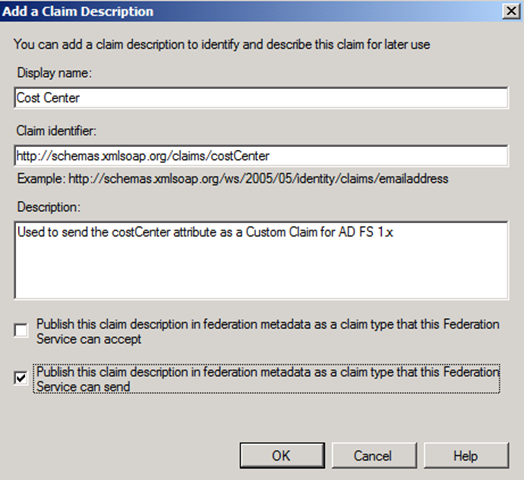 
The AD FS 1.x administrator will need to create an Incoming Custom Claim Mapping named costCenter so that the incoming claim is mapped.


The last thing we need to do on the AD FS 2.0 federation server is create a rule using the Send LDAP Attributes as Claims template to extract the costCenter attribute from AD and send it to AD FS 1.x as our new claim type. I have chosen to do this on the RP Trust which, again, negates the need for an additional pass-through rule to the RP. 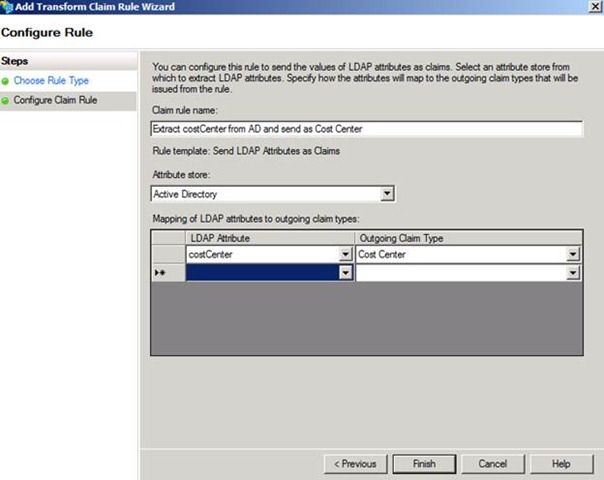 
We’re done! This blog post covers AD FS 2.0 as the Claims Provider (Identity Provider) and AD FS 1.x as the Relying Party (Resource Provider) because it is AD FS 1.x which has the special claims requirements. You can certainly configure AD FS 1.x as the Claims Provider and AD FS 2.0 as the Relying Party, but that deployment should be a bit more straight-forward since AD FS 2.0 simply needs to be configured to accept the incoming claims from AD FS 1.x. Thanks for reading, and please let me know if there are any questions or points needing clarification.


Adam “So He Claims” Conkle