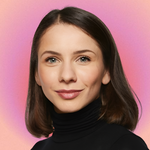 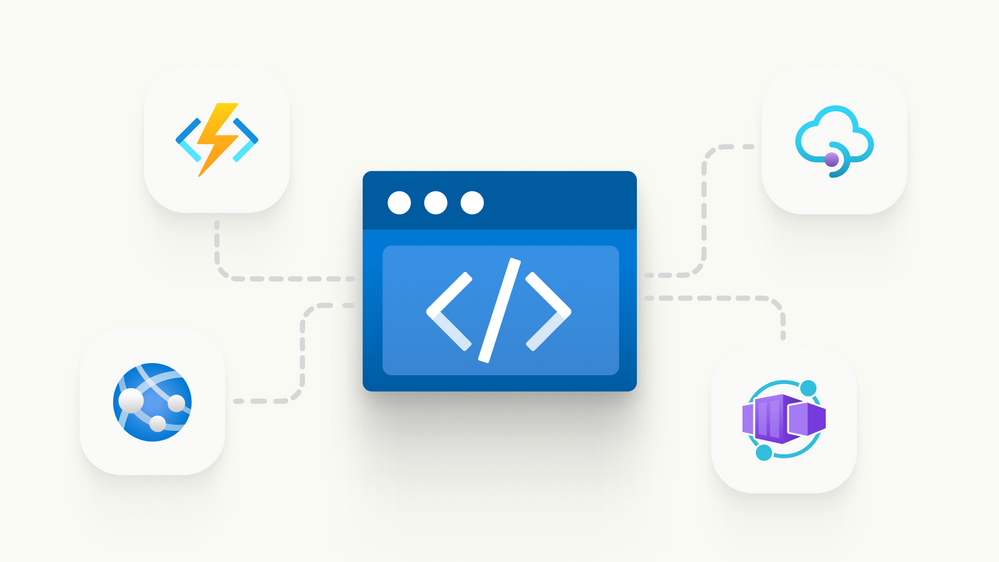 You can link any of these resources to your static web app’s production or named preview environments. When linked, any requests to a route prefixed with /api is routed to your backend resource. Using a linked backend allows your frontend app to call your API without configuring cross-origin resource sharing (CORS), and it enables Static Web Apps Authentication to work seamlessly and securely with your API.

To learn more, check out the documentation and try the tutorial below.

Adding authentication and authorization to a backend service can be a real pain point 🥵. Azure Static Web Apps makes this easy by providing built-in authentication using providers like GitHub and Azure Active Directory. You can use it to protect both your frontend app and your linked backend APIs.

Static Web Apps allows you to integrate with APIs hosted in other services such as Azure Container Apps. When a backend resource is integrated with a static web app, it's configured to accept requests exclusively from the static web app (you can change it to allow other traffic). If an end user is logged in with one of the configured identity providers, Static Web Apps adds an X-MS-CLIENT-PRINCIPAL header to every backend API request that contains information about the user and their roles. This allows you to use authentication in your backend APIs without writing any code.

Let's look at an example. It's a simple voting app.

After creating the GitHub project using the template, we'll deploy it to a new static web app. To integrate with Azure Container Apps, we'll need to create an Azure Static Web Apps resource using the Standard plan. You can use the the Azure portal. It will take a couple of minutes for the app to deploy.

In addition to the static web app, we'll also need a backend to serve as an API. For this example, I chose to create a scalable app using Azure Container Apps. Container Apps is a serverless platform that's great for running many types of containerized workloads, including web apps, background tasks, and microservices.

The app I deployed is a Node.js app in a container. It exposes an endpoint at /api/vote — simply returning a response containing {"message": "successfully submitted vote"}. You can deploy a container app with my Docker image (anninakeller/simple-survey:latest) by following these instructions.

It's important that our HTTP API has the /api prefix contained in the path since only APIs with that prefix will be available to the static web app.

Test your container app to make sure the endpoint is working.

Now we can go back to the Static Web Apps resource we created in the Azure portal and open the APIs tab. We'll see all the environments that we created for our app. For now, there should only be one. Click the Link button for the Production environment. Select Container Apps as the backend resource type and then the subscription and resource name of the container app we just created. Then click Link to integrate this container app as our static web app's API backend. 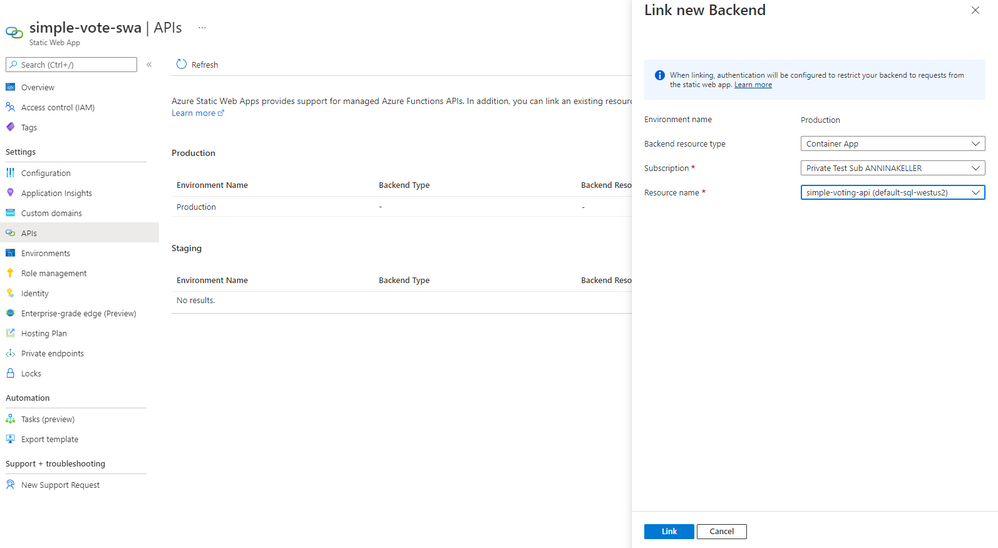 Fetch content from our API in our React app

Now we need to adjust our React code to actually make a call to our linked API that is now accessible at /api/vote on our static web app. Lets add this very simple code to our App.js file.

Push the code to GitHub and wait for GitHub Actions to finish deploying the changes.

The updated code sends an API request to the endpoint /api/vote whenever the Vote button is clicked, which in our case should send a request to our backend service and then alert the response text, "successfully submitted vote," as defined in our container image.
Once Linked APIs are activated for a Static Web Apps resource all requests containing the /api prefix will be forwarded to the backend service.

When we now go to the our static web app and press the Vote button, we will send the request to our linked API and alert the returned text.

The API request is forwarded from your static web app to the container app. The container app is not directly accessible. To view or modify its accessibility, open its Authentication tab in the Azure portal.

To make this scenario more useful, let's add some routing rules to our Static Web Apps resource.
Add the following routes array to your staticwebapp.config.json file.
This routing rule will forbid any user that is not logged in from accessing the defined route. You can test that by trying it out in your browser. You can also define the route as "/api/*" to prohibit any unauthenticated user from accessing the API.
Now, before you can access the backend resource again, you'll need to go to one of the login endpoints and login using one of the predefined identity providers. I am using GitHub, so I navigate to <static-web-apps-default-hostname>/.auth/login/github and login using my GitHub credentials.

Restricting access itself can be useful but in some cases you would like to be able to identify the end user as well. This information is passed to the API backend in the X-MS-CLIENT-PRINCIPAL header. To learn how to use it, see Accessing user information.

To learn more, check out the documentation.