This post is co-authored by Dongxu Han, Junwei Gan and Sheng Zhao

Neural Text-to-Speech (Neural TTS), part of Speech in Azure Cognitive Services, enables you to convert text to lifelike speech for more natural user interactions. Neural TTS has powered a wide range of scenarios, from audio content creation to natural-sounding voice assistants, for customers from all over the world. For example, BBC, Progressive and Motorola Solutions are using Azure Neural TTS to develop conversational interfaces for their voice assistants in English speaking locales. Swisscom and Poste Italiane are adopting neural voices in French, German and Italian to interact with their customers in the European market. Hongdandan, a non-profit organization, is adopting neural voices in Chinese to make their online library audible for the blind people in China.

In this blog, we introduce our latest innovation in the Neural TTS technology that helps to improve the pronunciation accuracy significantly: Unified Neural Text Analyzer.

What is text analyzer?

Neural TTS converts plain text into wave form via three modules: neural text analyzer, neural acoustic model and neural vocoder. Text analyzer converts plain text to pronunciations, acoustic model converts pronunciations to acoustic features and finally vocoder generates waveforms. Text analyzer is the first link of the entire TTS system with results directly affecting the acoustic model and vocoder. The correct pronunciation of a word or phrase is the basic expectation in TTS, which delivers the right information to use but it’s not always easy. For example, “live” should be read different in “We live in a mobile world” and “TV Apps and live streaming offerings from The Weather Network” depending on context. If TTS reads them incorrectly, the intelligibility and naturalness of the content will be significantly influenced. Thus, text analyzer is important to TTS.

Recent updates on Neural TTS include a major innovation to the text analyzer, called “UniTA” (Unified Neural Text Analyzer). UniTA is a unified text analyzer model, which seamlessly simplifies text analyzer workflow and reduces time latency in the runtime server. It adopts a multitask learning approach, jointly training all ambiguity models to solve context ambiguity and generate correct pronunciation and as a result reduces over 50% of pronunciation errors.

What are the challenges?

Most pronunciations are affected by these categories based on syntactic or semantic context, and these categories are all challenging disambiguation problems. The traditional TTS approach is a pipeline-based module called “text analyzer” with a series of models aimed at solving grammar disambiguation problems, which causes some of the following issues:

How does UniTA improve pronunciations?

Firstly, UniTA converts the input text to word embedding vectors through a pre-trained model. Word embedding is a set of language modeling and feature learning techniques in natural language processing (NLP) where words or phrases from vocabulary are mapped to vectors of real numbers. Conceptually, it involves a mathematical embedding from a space with many dimensions per word to a continuous vector space with a much lower dimension. Pre-training models like XYZ-Code have demonstrated unprecedented effectiveness for learning universal language representations based on unlabeled corpus with the method achieving great success in many tasks like language understanding and language generation.

Secondly, a sequence tagging fine-tune strategy is adopted in the UniTA model. UniTA is designed as a typical word classification task, in which

For example, the sentence “St. John had a 10-3 run to build its lead to 78-64 with 4:44 left.” in the training corpus is annotated as showed in the table below. “--” means there is no related tag in the category. In the word segmentation column, the phrase “10-3” is segmented as “10”, “-” and “3”; in the morphology column, the word “had” is annotated as “past tense”; in the text normalization column, “10-3” belongs to interpreting word “to” instead of “-“ while “4:44” belongs to the pattern using time format; In the abbreviation column, word “St.” is expanded as “Saint” rather than “Street”; and in the polyphone disambiguation column, the word “lead” is pronounced as [l i: d]. Actually, the word “lead” has two pronunciations, it is pronounced as [l i: d] when its POS is noun while pronounced as [l e d] when its POS is verb. This means the POS results and Polyphone results can share the inner information. In this way, multitask model improves UniTA accuracy.

Here is the figure of the UniTA model structure in Neural TTS: 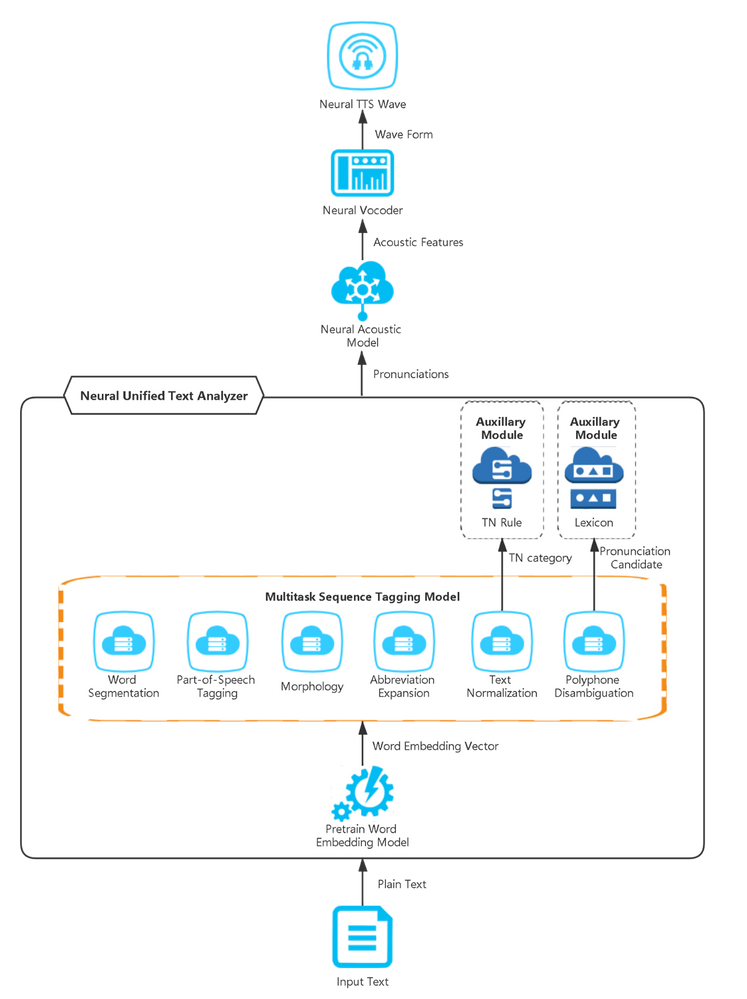 Compared with the traditional TTS text analyzer, UniTA reduces over 50% of pronunciation errors in improving pronunciation accuracy. It is already used many neural voice languages such as English (United States), English (United Kingdom), Chinese (Mandarin, simplified), Russian (Russia), German (Germany), Japanese (Japan), Korean (Korea), Polish (Poland) and Finnish (Finland). Due to varying types of grammar in language, not all categories are suitable for every language. For example, Chinese and Japanese heavily depend on word segmentation and polyphone while these languages don’t need morphology or abbreviation expansion.

Here are some samples of the pronunciation improvement using UniTA.

Hear how the Cortana voice pronounces each word accurately with UniTA.

With these updates, we’re excited to continue to power accurate, natural and intuitive voice experiences for customers world-wide. Azure Text-to-Speech service provides more than 200 voices in over 50 languages for developers all over the world.