Now more than ever, developers are expected to design and build apps that interact naturally with end-users. At Build, we’ve made several improvements to the Speech service that will make it easier to build rich, voice-enabled experiences that address a variety of needs with speech-to-text and text-to-speech.

Improvements to Speech Studio include: 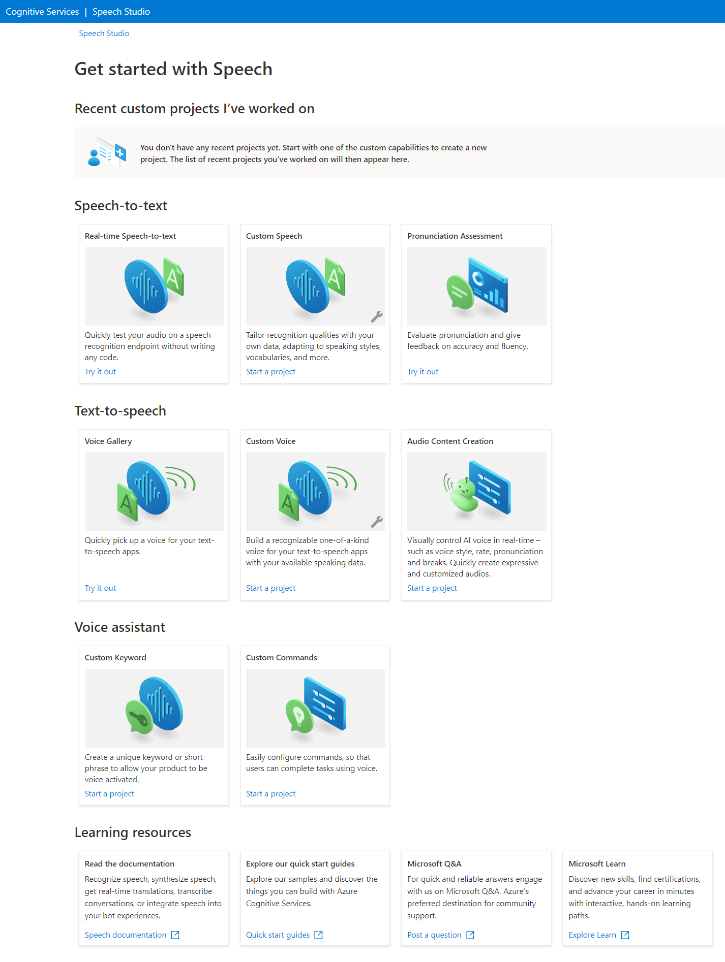 In addition, 11 new voices are added to the US English portfolio, enabling developers to create even more appealing read-aloud and conversational experiences in different voices. These new voices are distributed across different age groups, including a kid voice, and with different voice timbre, to meet customers’ requirements on voice variety.  Together with Aria, Jenny, and Guy, we now offer 14 neural TTS voices in US English).

Besides that, we also improve the question tones for the following voices: Mia and Ryan in English (United Kingdom), Denise and Henri in French (France), Isabella in Italian (Italy), Conrad in German (Germany), Alvaro in Spanish (Spain), Dalia and Jorge in Spanish (Mexico).

With this new voice, developers can easily enable their applications to speak multiple languages, without changing the persona. Learn how to use the multi-lingual capability of the voice with SSML.

What’s more, we have also brought this powerful feature to Custom Neural Voice, allowing customers to build a natural-sounding one-of-a-kind voice that speaks different languages. Custom Neural Voice has enabled a number of global companies such as  BBC, Swisscom,  AT&T and Duolingo to build realistic voices that resonate with their brands.

This cross-lingual adaptation feature (preview) brings new opportunities to light up more compelling scenarios. For example, developers can enable an English virtual assistant’s voice to speak German fluently so the bot can read movie titles in German; or, create a game with the same non-player characters speaking different languages to users from different geographies.

This enables developers to provide solutions to a global audience of users. A great example is Twitter, who are using Speech service to generate captions for live audio conversations on Twitter Spaces, making its platform more accessible to all its users.

Speech transcription is incredibly accurate and useful for scenarios like call center transcription and live audio captioning. However, in working with some of our customers, we noticed that in some cases, they have multilingual employees and customers who might switch between different languages, often mid-sentence. In our increasingly globalized world, the ability to support multilingual scenarios becomes more essential by the day- whether in conferences, on social media, or in call center transcripts.

With continuous language detection, which is in Preview, Speech-to-text can now support recognition in multiple languages. This removes the manual effort from developers to have to tag and split the audio to transcribe it in the correct language – it all becomes automatic. Using this, customers can send audio files or steams, each containing a different, or possibly more than one, language, and the service can process it once and return the resulting transcription back. To learn how to get started, visit our documentation page.

Pronunciation assessment is used in PowerPoint coach to advise presenters on the correct pronunciation of spoken words throughout their rehearsal. Teams Reading Progress  also uses pronunciation assessment to help students improve reading fluency, after the pandemic negatively affected students’ reading ability. It can be used inside and outside of the classroom to save teachers time and improve learning outcomes for students.

BYJU also uses pronunciation assessment to build the English Language App (ELA) to target geographies where English is used as the secondary language and is considered an essential skill to acquire. The app combines comprehensive lessons with state-of-the-art speech technology to help children learn English with a personalized lesson path.

Pearson’s Longman English Plus uses pronunciation assessment to empower both students and teachers to improve productivity in language learning, with a personalized placement test feature and learning material recommendations for different levels of students. As the world’s leading learning company, Pearson enables tens of millions of learners per year to maximize their success. Key technologies from Microsoft used in Longman English Plus are pronunciation assessment, neural text-to-speech and natural language processing.

Custom Keyword, now generally available, allows you to generate keyword recognition models that execute at the edge by specifying any word or short phrase. The models can be used to add voice activation to your product, enabling your end-users to interact completely hands-free. What’s new is the ability to create Advanced models – models with increased accuracy without you having to provide any training data. Custom Keyword fully handles data generation and training. To learn how to get started, read this walkthrough.

Here are the highlights of the May release of the Speech SDK 1.17.0:

See the Speech SDK 1.17.0 release notes for more details. If you’d like us to support additional features for your use case, we are always listening! Please find us on GitHub and drop a question! We will get back to you quickly and will do what we can to support you in developing for your use case!