UPDATE: 12/5/2016: In November 2016, the Security Monthly Quality Rollups were released as superseding the Security Only Quality updates. This resulted in an impact to customers deploying the Security Only Quality updates, using tools that cannot easily deploy superseded updates, such as System Center Configuration Manager 2007. Based on customer feedback, this supersedence has been changed in December 2016. Please review the updates below if this impacts your deployment scenarios.

The above versions of Windows will now follow a similar update servicing model as later Windows versions, bringing a more consistent and simplified servicing experience. For those of you who manage Windows updates within your organization, it’s important that you understand the choices that will be available.

First, let’s review what we will release each month - listed below are the three updates and their official titles:

A security only quality update

A preview of the monthly quality rollup 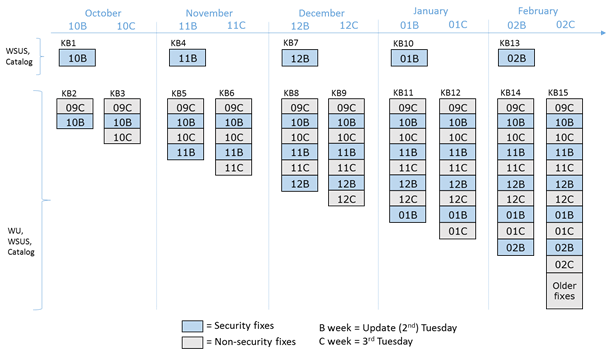 Each month there will be separate updates released for a variety of reasons (e.g. DST time zone changes, out-of-band security fixes). Many of these will be rolled into the next monthly rollup, although some will remain separate- including Office, Flash and Silverlight updates.

UPDATE: 1/13/2017: Starting with February 2017, the Security Only update will not include updates for Internet Explorer.  Please see our January 2017 blog post for further details.

See https://blogs.msdn.microsoft.com/dotnet/2016/10/11/net-framework-monthly-rollups-explained/ for more information on the changes to .NET Framework updates.

Operationally, this means that you now have some choices for updating Windows 7 and Windows 8.1 PCs.  These choices closely correspond to the way you update Windows today, as discussed in the following sections.

This is our recommended updating strategy, as it ensures that all fixes for Windows are deployed on the PCs that you manage.  To implement this, you should deploy the monthly rollup.  For those using WSUS, the following steps are recommended: 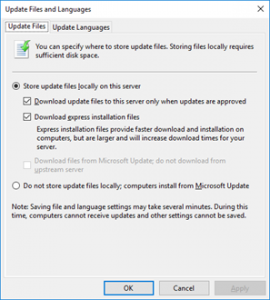 If using ConfigMgr, you can perform similar steps: 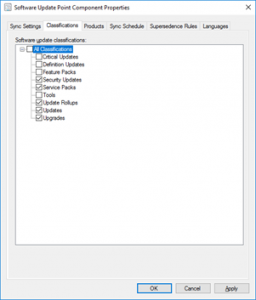 With these small adjustments, the overall update management process will be very similar to what was used previously.

You install all security fixes, but no other fixes

For organizations that typically deploy only security fixes, you will now find that instead of approving or deploying a set of fixes each Update Tuesday, you will approve or deploy just a single update.

Since the security only update and the monthly rollup both are published using the “Security Updates” classification, existing automatic approval rules in WSUS would approve both the security only and the monthly rollup each month.  The same is also true with Configuration Manager automatic deployment rules.  This will require either manually approving or deploying updates each month, or in the case of Configuration Manager, adjusting existing automatic deployment rules.  See the previous section for details.

You install all security updates as we release them, and some non-security fixes to address specific problems

Since the organization will typically be deploying only the security only fix, see the previous section for full details.  In cases where there is a need to deploy one or more non-security fixes, manually approve the latest monthly rollup that contains the needed fixes.  This monthly rollup will contain other fixes as well, so the entire package must be installed.

What’s expected if you deploy both updates?

Since all the new security fixes for a given month are available in both the security only update and the monthly rollup, it’s important to understand the behavior that may been seen if you deploy both updates in the same month.

For example, assume you approve and deploy the security only update and the monthly rollup that are both released on Update Tuesday (a.k.a. “Patch Tuesday,” the second Tuesday of the month).  This isn’t necessary, since the security fixes are also included in the monthly rollup, and it would generate additional network traffic since both would be downloaded to the PC.  But what would happen?  It depends on the installation sequence:

As long as you install one or the other (security only update or monthly rollup), the PCs will have the needed security fixes released that month.

The common concern:  What if an update causes an issue?

Every Windows update is extensively tested with our OEMs and ISVs, and by customers – all before these updates are released to the general population.

Your organization may also be interested in validating updates before they are publicly released, by participating in the Security Update Validation Program (SUVP).  This program enables organizations to establish an additional early validation ring within the organization, while also providing a direct channel back to Microsoft for any issues encountered.  For more information on SUVP, see this blog post; and contact your Technical Account Manager or Microsoft account team to discuss this further.

To minimize the potential impact on an organization, we recommend that you always have a “ringed” deployment approach for all updates, starting with the IT organization, expanding to one or more pilot groups, followed by one or more broad deployment groups.  Allow sufficient time between rings for users to report any issues that they might see.

If any issues are encountered, we recommend stopping or pausing deployment of the update and contacting Microsoft Support as soon as possible.  Based on our analysis of the issue, we may recommend different courses of action, such as:

The specific action is determined on a case-by-case basis, and could be different for each customer based on the specific impact to the organization.  Regardless of the action, be assured that any issues with an update are considered top priority and that we will work hard to resolve these as quickly as possible.

Use peer-to-peer technologies to help with update distribution

While express installation files can help greatly reduce the amount of content needed to patch each PC, it is still useful to implement peer-to-peer sharing technologies like BranchCache or Delivery Optimization to reduce the overall impact on the network by allowing PCs to obtain the updates they need from other PCs on the network that have already obtained them from WSUS or ConfigMgr.

You can deploy BranchCache by enabling the feature on each WSUS or ConfigMgr server, then configuring the client PCs using Group Policy to use a distributed cache.  See https://technet.microsoft.com/en-us/itpro/windows/manage/waas-branchcache for more information.  While the full BranchCache functionality is only available in the Windows Enterprise SKU, BITS support (all that’s needed for caching updates) is also available in the Windows Pro SKU.  See https://technet.microsoft.com/en-us/library/mt613461.aspx#bkmk_os for more information.

To learn more about the security and non-security updates for these versions, check out the Update History pages below:

Updated 12/5/2016 to include additional detail on the removal of Monthly Rollup supersedence of Security Only updates.