Dark theme is spread on many major websites on the web and becoming prebuilt color scheme in Microsoft, Google and Apple operating systems. Many websites have a toggle to enable dark theme across all the content there, since some Microsoft web apps have this: Outlook, To-Do, etc.

These days, the Dark Theme started to spread in many websites and applications.
I think it is time to adopt this approach and support the Dark Theme in this community.

If only not as default one

I think the wise approach is to let users choose what the default theme they like!

The engineers of this community can easily implement this feature as their colleagues did in Microsoft Docs website!

Please see the below screenshots and note the button in the right-hand corner which allows the user to switch to the dark theme.

@Haytham Amairah, I have no problems it that will be as an option

Interesting idea, we would need to look into what this would involve, the community has an awful lot of css styling and the effort required to implement dark and light skin on the community would be significantly higher than, say, on a standard website.

I will have a chat with our developers and see how feasible that is.

As most of your will know by now I am fixing our Idea statuses so forgive this change from one state called Under review to Under Review.

By way of an update, I did speak to our developers and it would be super complex to do. I think its still a great idea though so lets deal with other low hanging fruit such as page load times, navigation and mobile updates a priority.

I will come back to this though as I would like to be able to make it dark to. I did see a plug in for one of the browsers somewhere which is supposed to this for you.

I like this idea but its not currently on our backlog.

If you would like a dark theme then please upvote this idea and help us focus our priorities.

The status of this idea has gone back to new only because I am slimming down the number of statuses we have.

Thank you for your feedback, we will consider this in future sprints, its not a easy thing to implement with a site that has user submitted content because you have to consider all potential styles and images that might be submitted.

Personally I love dark theme, I use it everywhere so I am totally on-board with this but I want to manage your expectations that this isn't something we are planning in the short term.

Using preview versions of Edge (Beta, Dev or Canary), there is an extension* which applies dark mode to any website, including this one. It works really well here, with the only blemish I've noted being the Microsoft logo at the top of every page. It has a white background instead of the transparent one it should have to work everywhere.

For once, the sister site Microsoft Community (https://answers.microsoft.com) gets this right, using a logo with a transparent background:

This is a simple solution to an eyesore for those of us who otherwise enjoy reading TechCommunity in dark mode.

Cool I will work this into a future sprint for a fix, obviously our visual assets are based on the website having a white background.

Will let you know when its live

Thanks! Just so you know what I'm on about, here's a screenshot: 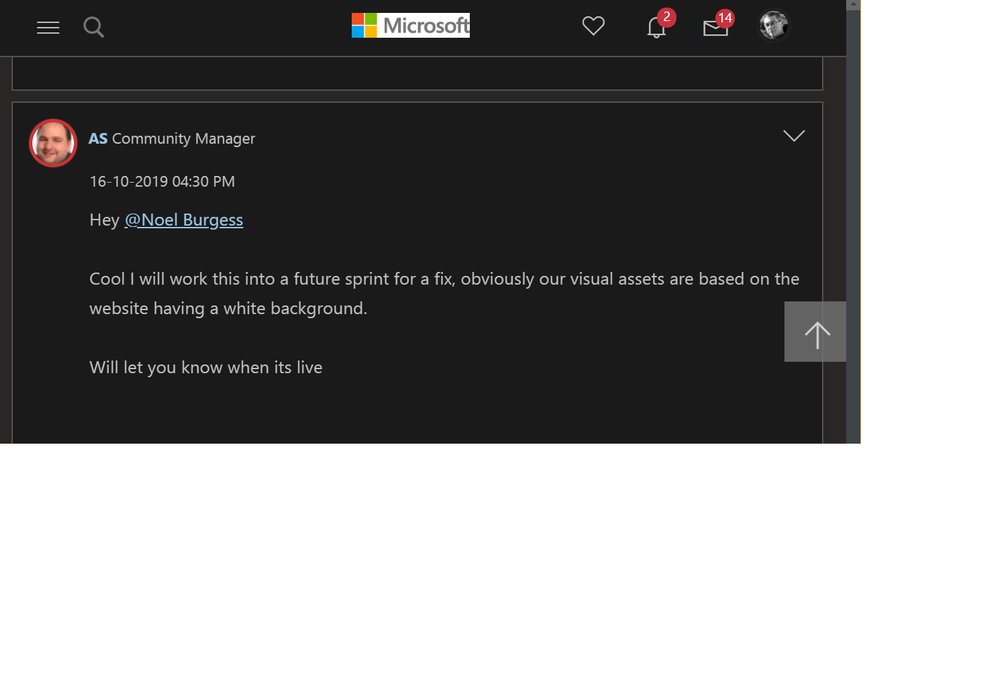 @Noel Burgess we fixed this.. thanks for flagging

I noticed the fix, but not your comment! Thanks for getting it dealt with.

This sounds great. of course browsers like Microsoft Edge has the ability to force dark mode on any website but I'm sure if Microsoft implemented it natively on their end, it would look much better.

I think dark mode should be added. Light mode is a pain when you read in the dark.

Oh, I hear you; the problem is it adds allot of technical overhead in a space full of user generated content. i.e. how do you always ensure everything has the right color contrast for accessibility when you can't have two copies of a visual asset uploaded in a user post.

I want to be clear I am not saying no here but there are some definite technical challenges. I have used nighteye, suggested above, and it works very well and is available for both Edge and Chrome.

Dark Mode is well supported at this site. You just need a browser that supports it, like

I forgot to specify iPhone used.

Thank you for the feedback, and this isn't the first time we have had this feedback. With the new architecture we will be implementing before the end of 2022 it will be much easier to support multiple skins. We will mark this as planned and I will communicate updates as we continue to build the new Tech Community Experience.