Turn on suggestions
Auto-suggest helps you quickly narrow down your search results by suggesting possible matches as you type.
Showing results for
Show  only  | Search instead for
Did you mean:
Windows Server Backup automatic disk usage management
By


After you configure a disk for a scheduled backup, Windows Server Backup automatically manages the disk usage—you do not need to be concerned about running out of disk space after repeated backups. Windows Server Backup will automatically reuse the space occupied by older backups when creating new backups. The management tool displays the backups that are available as well as the disk usage information. This can help you plan for provisioning additional storage to meet your recovery objectives. 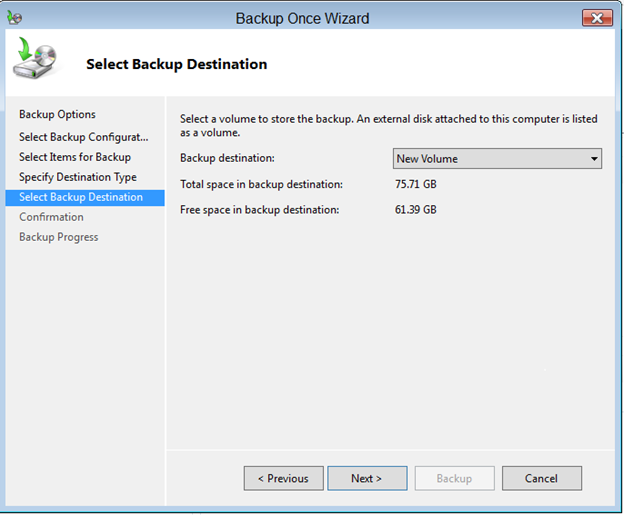 How does it work?


Automatic Disk usage management feature comes into play when Windows Server Backup detects that the backup target does not have enough space to accommodate the backup while backup is in progress. The way Windows Server Backup creates space for new backup is by shrinking the storage space allocated for snapshots (called diff area ). As a result, one or more older snapshots (and hence backup versions corresponding to those snapshots) occupying the diff area that got shrunk get deleted. Before shrinking diff area, WSB determines whether shrinking the diff area can free up the requisite space so the backup can happen. If enough free space can get created, WSB goes ahead with the shrinking and continues with the backup.  WSB will not shrink the diff area to less than 1/8 of Target volume size as we do not want to lose all past backups just to accommodate this one. This is why sometimes backup fail with target out of disk space in spite of automatic disk usage management feature in Windows Server Backup.


This feature will not work if Windows Server Backup has reached the state where it cannot further contract the snapshot allocated space and also preserve some of the existing backups. This happens when space required to complete the backup causes the snapshot storage space to become less than 1/8 of the target size. You can change the snapshot storage from here: Volume à properties àshadow copies àsettings.

If the Automatic Disk usage management criterions are not satisfied, you can still delete old backups created by Windows Server Backup. For the steps to do this, refer to the next section.


If you want to delete the system state backup, you may use " wbadmin delete systemstatebackup " in command shell.

Windows Server Backup does not support backup deletion of other kinds. However, there is a work around if you really need to delete backups on a target. You can delete the shadow copies where the backup exists. Note that these steps are not recommended and utmost care must be taken to not delete backups incorrectly. If you incorrectly delete your backups, these will be permanently lost.


The steps to delete the backups are as below,