First published on CloudBlogs on Apr 18, 2018
This post is authored by Tal Maor, Security Researcher, Azure ATP. After announcing the release of Azure Advanced Threat Protection (Azure ATP) just a few weeks ago, we are excited to provide details on how Azure ATP has been updated to better protect customers against a new exploit by including the identity theft technique used in the Credential Security Support Provider (CredSSP) Protocol exploit as a flavor of the Pass-The-Ticket detection. In March, Microsoft released a patch for CVE-2018-0886 , which protects against a vulnerability discovered by Preempt . The vulnerability allows attackers to perform authenticated remote code executions by taking advantage of the way CredSSP validates requests during the authentication process. In this blog, we provide network behavior analysis of the CredSSP exploitation of this vulnerability and the techniques it uses to propagate in the network. Additionally, we highlight how you can use Azure ATP to detect and investigate a variety of advanced cyberattack attempts.

The CredSSP enables an application to securely delegate a user's credentials from a client to a target server; any application that depends on CredSSP for authentication may be vulnerable to this type of attack. The CredSSP remote code execution vulnerability is also known as Kerberos relay attack using CredsSSP because it uses Kerberos to authenticate against the target and sign malicious payload. As an example of how an attacker would exploit this vulnerability against Remote Desktop Protocol, the attacker would need to run a specially crafted application and perform a man-in-the-middle attack against a Remote Desktop Protocol session. 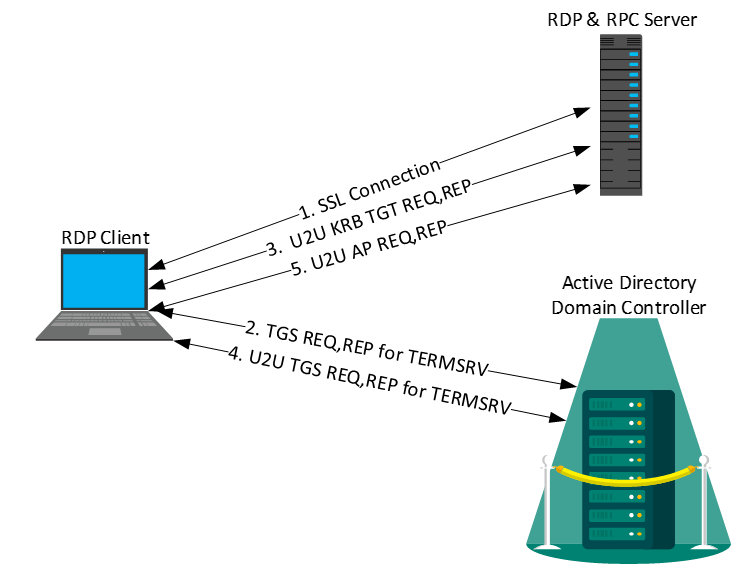 At this point, the authentication phase is over, and the encrypted RDP session was established.

In this flow, the target is the Domain Controller that also runs RDP and RPC servers by default. 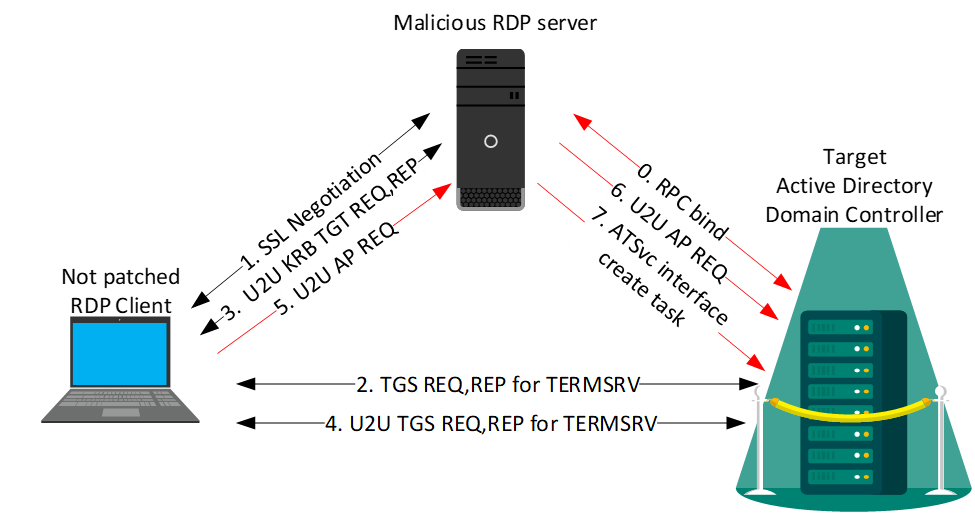 Setting up the malicious RDP server 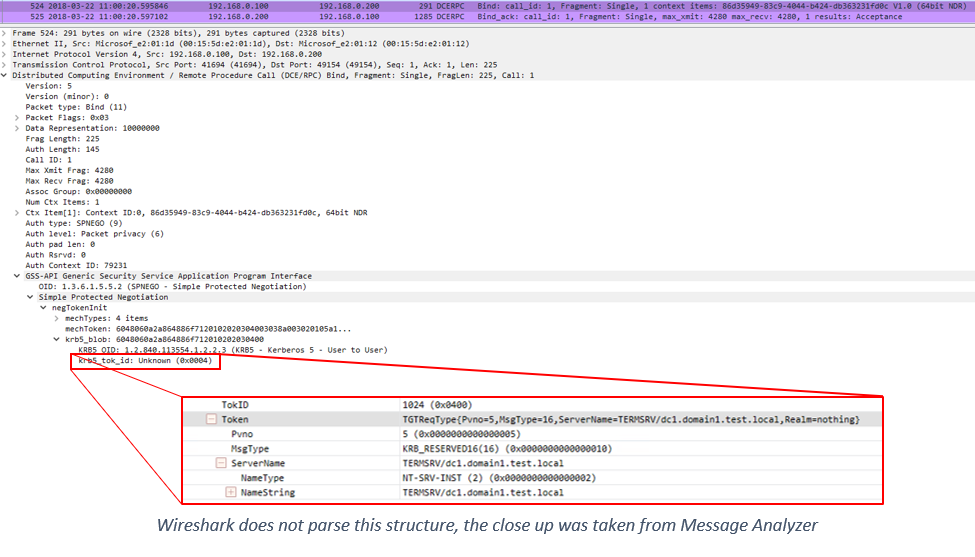 Waiting for the victim to connect via RDP 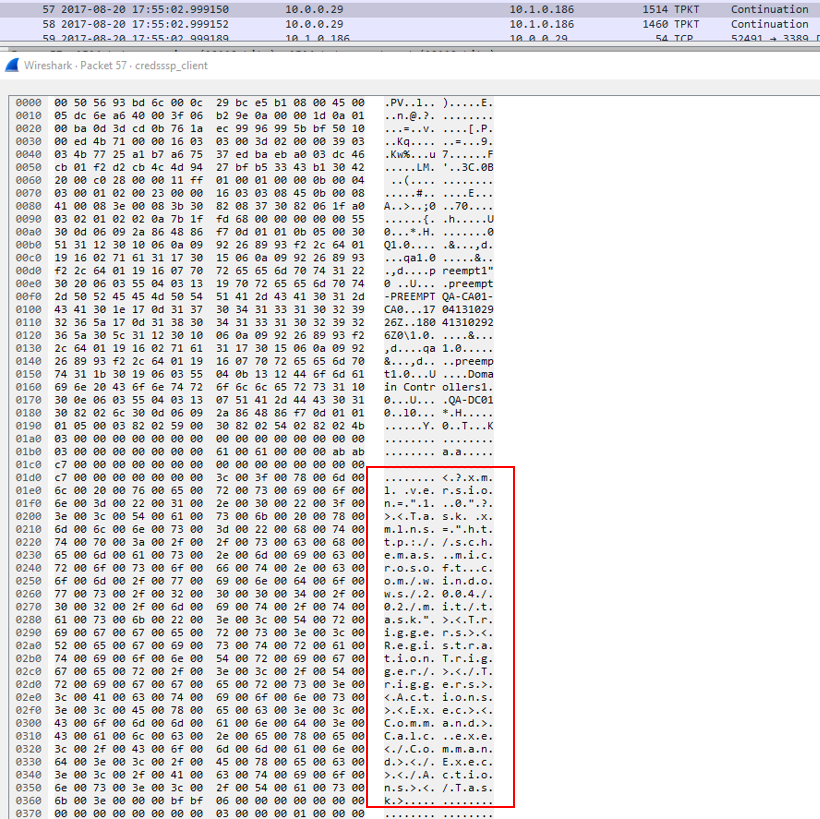 3. The client requests TGS for TERMSRV on the malicious RDP server - this TGS won’t be used although it is retrieved.

4. The client requests the TGT which should be used as an additional ticket for granting TGS to the malicious RDP server - this step is unique for the U2U mechanism.

5. The client requests the KDC for U2U TGS (using the RDP client TGT from its normal AS) and additional TGT of the RDP server (retrieved in step 3). 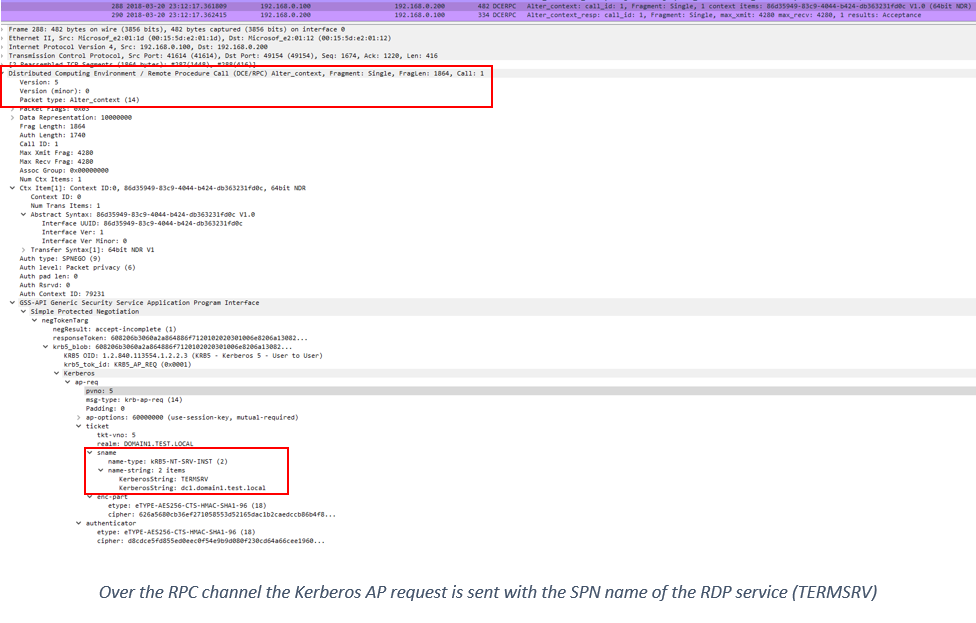 7. The malicious server sends the signed task scheduler request, which was sent to the victim as a public key (in step 0) and was returned signed by the victim (in step 6), over the authenticated RPC session to create malicious task successfully.

This type of identity theft can be detected by Azure ATP as an identity theft using Pass-The-Ticket attack. Given that the Kerberos AP request from the attacker using the original clients TGS, Azure ATP will detect this malicious behavior and will create the following security alert:

In addition, Azure ATP detects several Remote Code Execution techniques performed against the Domain Controller. Given that the RPC makes a call to create a task scheduler on the domain controller, the following security alert is created:

When the two security alerts started concurrently and point to the same machine, this can point to the conclusion that this machine performed a remote malicious operation by using the theft identity like as the operation performed by the CredSSP exploit.

We strongly recommend that customers who have not yet set the security update for CredSSP to do so as soon as possible. For more information on how to apply the patch please visit CredSSP updates for CVE-2018-0886 . You can learn more about Azure ATP here , and when you are ready, start a trial !