Since 3D was first introduced in Office, we’ve heard resounding feedback from the community that better guidance was needed to help users acquire, build and convert 3D content for use in Office. Whether you are an Office user looking to acquire 3D assets for your documents, or a 3D professional creating content for your clients, we are pleased to announce that the 3D Content Guidelines for Microsoft are now publicly available, and have been developed to help users be more successful with 3D in Office.

Customer connections were the key to defining the scope of what the guidelines cover. These connections gave us the opportunity to understand the friction points first-hand, provide immediate support to keep customers moving forward, and roll those learnings back into the guidelines.

The 3D Content Guidelines for Microsoft are split into four major sections and can be read in sequence or independently depending on what you would like to accomplish.

3D engine overview
Learn about the inner workings of the real-time 3D engine used in Office and how it compares to other methods of rendering 3D content. 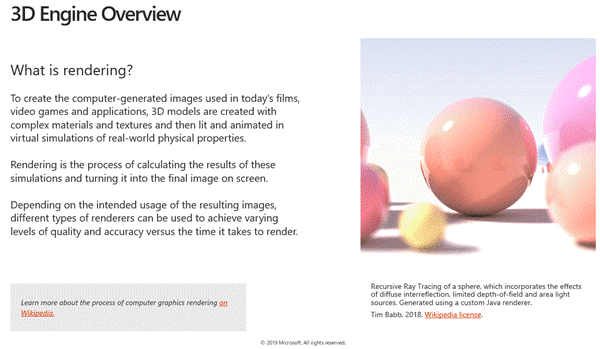 Content creation
Step through the process of creating custom 3D content for real-time rendering in Office. From modelling, surfacing and animation guidance for new content, to exporting, converting and optimizing existing 3D content, this section will help to ensure that 3D assets targeted for Office will render optimally. 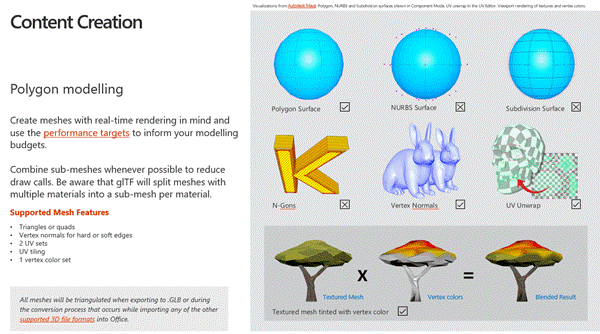 Additional Resources
Discover tools for viewing, analyzing and validating your 3D content as well as links to other valuable resources. 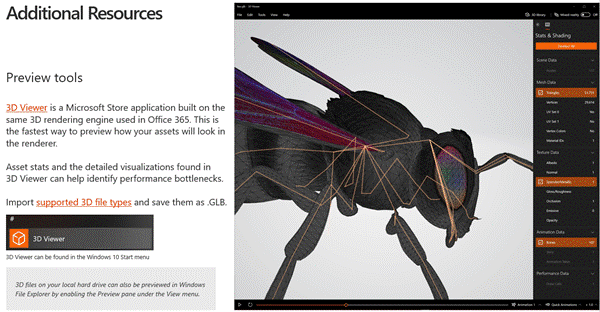 While today's version of the guidelines is focused on Office, the vision is to expand the scope and include other Microsoft products and services in the future. We believe these guidelines will be a good connection point between many of the great existing resources and look forward to continuing to evolve them to meet the growing needs of all our users. Please check them out!

Hello, Thank you for this guide! I've been looking for such guidance for months, and didn't find anything similar. All my knowledge on 3d in PowerPoint was based on trail and error.

However there is one issue that I still cannot find an answer for:  How can I turn OFF the default PowerPoint lighting while inserting a 3d model to PowerPoint?

My 3d models are "baked" meaning that they don't need an extra light, the light is baked into the textures (which is a common practice in all modern computer games) and I just want to turn off that light. So actually what I need is ZERO environment lighting, and have my models show off their baked lighting on the textures. (In some other 3d platforms such as UNITY and UNREAL it is much more complicated - I guess it should be simple here)

By the way - my models look great in Microsoft's 3d Viewer - where I have control over the environment, but when the same model is inserted to PowerPoint - the PowerPoint light "burns" it, by adding light to the pre-baked textures.

I even tried to save them from the 3D viewer - hoping that the light settings will be transferred to PowerPoint, with no luck.

I looked everywhere inside PowerPoint, even found the in the Format tab under material some options that had a little effect on it.

Again I'd like to praise the new guidelines , but at the same time to ask Is there any one who knows who I can ask about this? Or where I can  read about it.

I totally get it. Let me look into this with our engineering teams and see what can be done. This is great feedback!

Hi, I got a great answer from Michelle, Program Manager in Office in charge of 3D support.

Looking forward for some more 3d from Microsoft!