Turn on suggestions
Auto-suggest helps you quickly narrow down your search results by suggesting possible matches as you type.
Showing results for
Show  only  | Search instead for
Did you mean:
Access to XAML controls in a React Native for Windows application (Part 2)
By

In the previous blog post I showed one approach to manage a scenario that can't be done in React Native for Windows out of the box: getting access to the native XAML controls behind the JSX ones, so that you can support scenarios like showing a flyout near another control.

Thanks to the feedback from Steven Moyes and Alexander Sklar from the React Native for Windows PG, I've found out that there's a better way to achieve the same goal. Alexander is the main maintainer of an open-source library, published by Microsoft, called react-native-xaml, which enables you to bring any XAML control into your React Native for Windows applications. The only caveat is that such a UI won't be any more really cross-platform, since these controls can't be rendered on Android, iOS or macOS. However, the same limitation applies to the approach we have seen in the previous post, since Flyout is a control which is available only for Windows.

Thanks to react-native-xaml, you can easily build a component like the following one:

We are importing the DatePicker control from the react-native-xaml library, which is mapped to the native DatePicker control in WinUI. Thanks to the library, we have also access to the same properties and events we have in XAML, but exposed in camel case to follow the JavaScript naming conventions. In the previous snippet, you can see we're setting the dayVisible property to hide the day from the selection and we're subscribing to the onSelectedDateChanged event to get notified any time the user selects a date. We even have access to the event arguments raised by the event, using the nativeEvent.args property. Now we have a fully fledged DatePicker control available in our application, without having to write a custom native module: 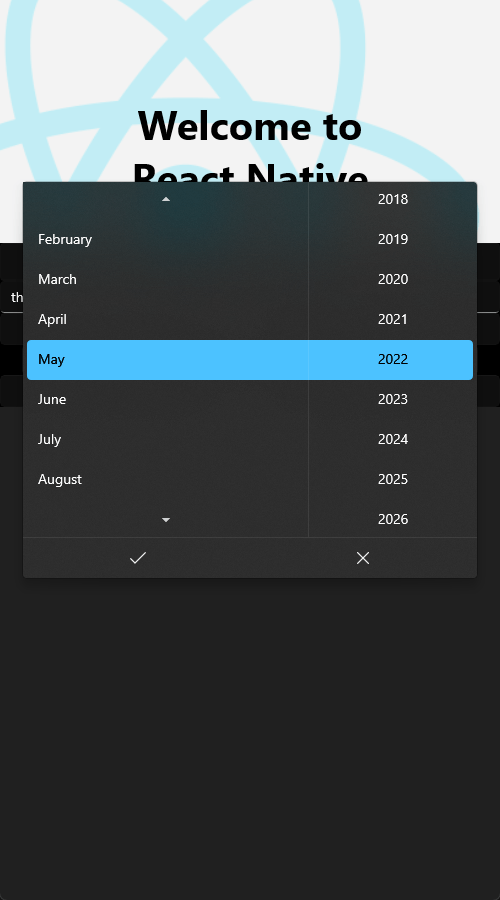 Is it possible to use react-native-xaml to implement the scenario we have seen yesterday with the Flyout control? Yes!

Connecting a flyout to an existing control

First, we import a few controls from the react-native-xaml library: TextBox, MenuFlyout and MenuFlyoutItem. Then, exactly like we would do in XAML, we define a new MenuFlyout control, and we set it as children of the TextBox control. This way, we'll anchor the flyout to the TextBox, so that it will be displayed close to it. Like in XAML, we can subscribe to the onClick event to trigger an action when an item is selected. In this case, we just display a popup with a message.

We have created the flyout, now we must make it visible. Let's expand the code to add a Button to our component, which will trigger the flyout once it's clicked:

Compared to the first snippet, we have made the following changes:

That's it! Now, when you click on the button, you will see the flyout being displayed on top of the TextBox control, in the same way we did in the previous blog post, but without needing to create a custom native module: 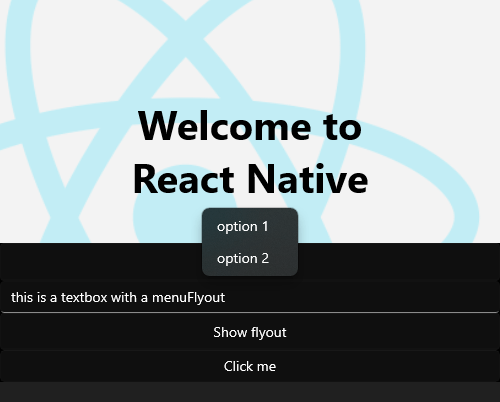 Displaying a flyout in a specific area of the application

In the previous blog post, we used the reference approach supported by React Native to pass the JSX control to our native module, so that we could retrieve the underneath XAML control and show the flyout close to it. The reference approach can also be helpful in case you want to use react-native-xaml to display a flyout in a specific area of the application. Let's see the code!

First, we create a MenuFlyout control in JSX, using the react-native-xaml library. However, this time, we are using the React.createRef() method we've learned in the previous post to store a reference to the control using the myFlyout variable. Once we have a reference, we can call the ShowAt() method exposed by the base MenuFlyout control, which requires two parameters:

Thanks to this code, we can display the flyout in any position we want, as in the following image: 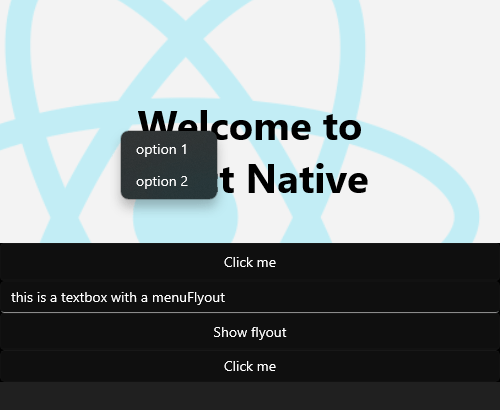 react-native-xaml is an amazing library, which helps you to get the best of both worlds: the great developer experience offered by React Native and the powerful XAML controls offered by WinUI. If you want to see more examples of how to use it, I recommend checking the guide you'll find in the GitHub repository.

I've also updated my sample to support the scenarios we've seen in this post.