We have added the ability for meeting organizers to pre-create breakout rooms before the meeting starts and perform participant assignment tasks (both auto and manual) in advance. 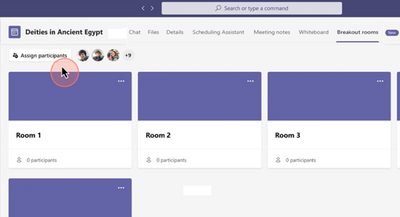 Before a meeting starts, meeting organizers of channel and private meetings are able to access a new tab in scheduling form called Breakout rooms. This will enable them to pre-create breakout rooms and pre-assign participants.

Breakout room managers are not assignable to rooms, instead they can move freely between rooms.

Enable your Teams client for the public preview

Send us your feedback

Got feedback on features in the public preview or other areas of Teams? Let us know straight from Teams via Help > Give feedback.

Thanks for posting, Kaushal
0 Likes
Reply

thank you for the update. Have checked and there is the breakout room tab. but don't know how to assign participants into rooms yet. nice feature.
thank you
0 Likes
Reply

Can we pre-assign an attendee of Out-tenant ?

I tried above but only pre-assign an attendee of In-tenant.

Will it soon be possible for an attendee to choose the breakout room they prefer, instead of assigning the attendees to a breakout room
0 Likes
Reply

Is there a way to do these things from Outlook or will it only be available in calendar through Teams?  It works great in Teams, just need to get used to doing things there rather than in Outlook, if that is the case.

Great to see these usability improvements.

Please extend this to work also with registered participants of meetings with registration (i.e. webinars).

I am also work in same ways with racquets for badminton 2021  network members.

Hi Rikky, I saw your message about the breakout rooms tab, please can you tell me where you found it.  I am trying to set up breakout rooms before a meeting, haven't done this before & can't see how to do it, any help gratefully received.  Kind regards Jacqui

@RikkyCitra Many thanks will give those a try