In the blog post “Active Lists out; make_list() in,” @Ofer_Shezaf referred to one of the uses of Active Lists (ArcSight) or reference sets (QRadar), namely implementing correlation. But Active Lists, reference sets, and the appropriately named Lookups in Splunk have another important use: lookups. In this blog post, we will explore lookups in Azure Sentinel.

Azure Sentinel has various methods to perform lookups, enabling diverse sources for the lookup data and different ways to process it. Overall, I think you will find that Azure Sentinel capabilities offer unparalleled lookup prowess.

This post of part of a series of blog posts on writing rules in Azure Sentinel:

Why do you need to look up information in a SIEM query, whether hunting queries or detection rules? The top reasons are:

Those are critical capabilities of a SIEM. While each specialized security tool has a partial view of the world, a SIEM can utilize its broader outreach to enrich the event and alert data and centrally manage allow-lists and watch lists.

In this blog post, I examine implementing all those use cases in Azure Sentinel.

Azure Sentinel provides four methods to reference, import, and use lookup information. The methods are:

In this article, we discuss each of the latter three, leaving Watchlists to the official documentation, and finish with a comparison of them.

Note that while importing or referencing, the lookup information differs between the methods. Performing the lookup action in KQL is similar, and the examples weaved through work with any lookup method, including Watchlists.

To support a lookup from an external file, KQL offers the "exernaldata" operator. Unlike lookup implementation in other SIEM products, externaldata is not a lookup operator. Instead, externaldata enables using files as if they were Azure Sentinel tables, allowing pre-processing of the file before performing the lookup, such as filtering and parsing. I will demonstrate each in the examples below. 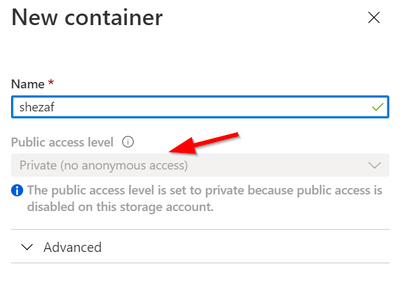 To get a secure access URL, use the “Get Shared Access Signature…” feature, which generates for you a URL similar to this one: 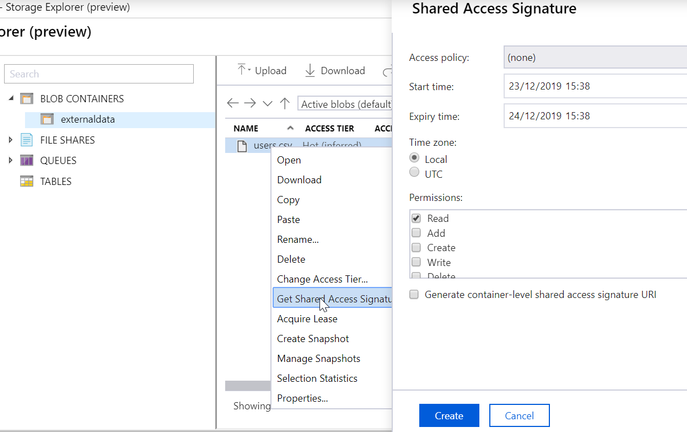 Using the reference file in KQL

Since we start with an allow-list example, we need only the first column from the lookup file and can use the following KQL command to reference the file:

When you run this query, you get this: 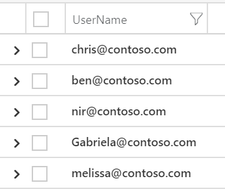 Only the first column of the file is used since we defined a type only for it.

The filename extension identifies the file as CSV; however, we could have overridden the type. For example, if we force “txt” as the file type, each file line is considered a single field, and the query returns in the UserName field the entire line. Other supported formats include JSON and AVRO, as well as compressed files.

For a full list of supported file types and other attributes, refer to this page.

To implement while listing, let’s take Azure Sentinel’s rules to detect Failed login attempts to Azure Portal. The modified (and abbreviated) query is below, with the modifications marked in yellow:

Wonder why the “~”; in the “not in” operator? It means that the comparison is case insensitive.

But what if I want to allow-list by two fields, i.e., use a table with users and apps and allow-list the users only to specific apps. You can do that using concatenation as follows:

Let’s use the same alert rule to demonstrate a watch list. Login failures are not particularly interesting; however, there might be a few users for which we want to check each failure. Assume that those are the users for which the risk is higher in our lookup table.

Now we need additional fields in the reference table, so let’s extend the fields' mapping. By specifying the other columns in the source file, we make them all available for our queries:

Now, by slightly modifying the alert rule query, we implement our watch list:

You may notice that the watchlist table has 4 columns and ask how it is used in an “in” clause. When a table is used with the “in” clause, the first column is used, which is what we need here. If we had liked to check against a different column, we could have appended a “project” operator after the “where Risk > 90” phrase to select the field we want to match against:

This requires two significant additions to the toolbox we used to allow lists and watch lists:

Extracting the country code from the reference table is an excellent example of the versatility that externaldata provides. By making the reference file a native table, it enables further processing it.

For example, we can extract the country code from the location string using the extract function, which applies a regex to the Location field and assigns the identified part to the user_country calculated field:

Once the country code is available, regardless of the method, we can apply it to the events for detection purposes using the join operator:

The join statement works as follows:

To make reference tables easier to use interactively by analysts, you can save the externaldata query as a function. This way, it can be used in any of the use cases above without needing to include the URL or the parsing clauses directly. So, for example, if the last externaldata query above is saved as the function "userinfo," the "join" statement could have used userinfo without explicitly defining it in the query itself.

Using a workspace table as a reference table

Sometimes it is more convenient to use a custom log table in the workspace as a lookup table. Any method to ingest data to a custom table would work to populate it. A simple method is using a PowerShell script, in this case, to upload the same file as a custom table, facilitating the same use cases described above:

The command uploads the file to a table called user_lookup_CL (CL is always appended to custom log tables).

There are two tweaks to keep in mind when using a custom table:

First, since you cannot delete data, add to it. If you want to update records in the table, you need to upload the records again, creating duplicates. KQL arg_max operator can help:

While each user will have multiple records, the allow-list will include only the last record for each user based on the timestamp. This way, the allow-list table is a plug-in replacement for the externaldata implementation above.

Secondly, since analytic rules can inspect only data from the last 14 days in a table, you may need to refresh the custom table periodically. The simplest solution is a scheduled Logic Apps workflow that will read the table and write the data back to the same table.

Another option is to use KQL functions utilizing the datatable operator as reference tables. To create the same lookup used throughout this article, type in the "Log" screen the following query:

The query uses a datatable operator to declare the lookup table.
Save it using the Save option:

Make sure that you use the following values in the Save dialog box: 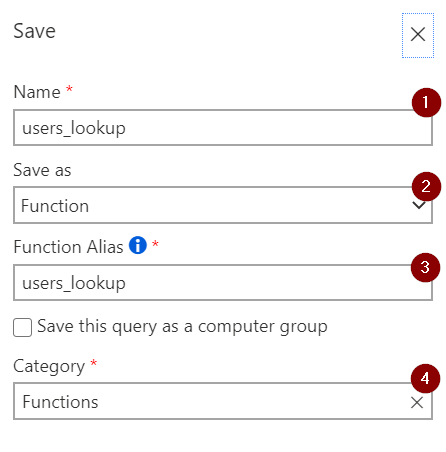 You can also use an API to create and update KQL stored functions, and this way, automate lookup table management.

Now you use "users_looup" in the lookup queries presented in this article:

Which one should I use?

We presented three methods to manage the lookup table. While the actual use in queries is essentially identical, the methods differ regarding the lookup table features: size, cost, performance, update options, and security. The following table provides a comparison: