This week we hear from MVP Joost van Schaik about how he unwittingly contributed to the work of Mars scientists through his HoloLens blog tutorials. Joost was delighted to find out that PhD researcher and software engineer Alireza Bahremand had in fact been using his blogs to help in the development of the augmented reality Curiosity rover, used in demonstrations by NASA scientist Dr. Tanya Harrison.

Joost started his blog almost 12 years ago, and has kept true to its mission ever since. “The goal of my blog is to be a collection of how-to examples in the Microsoft software stacks - things that may take forever to find out, especially for the beginner. I see it as my way to return something to the Microsoft community in exchange for what I learned from it,” explained Joost. “There is also something extra to it. Whenever I describe something that involves code, I always include a complete running example too.”

“This comes from the frustration of many of the examples and Stack Overflow answers out there. Many of them assume too much context and knowledge, limiting those without a certain amount of base skills from using their ‘wisdom.’” And so, Joost’s “trade mark” has become providing all the context that a beginner might need, and enriching the community in the process.

So, when Joost found out that his blog tutorials had been used by a NASA PhD student working with Dr. Harrison, he was elated. Dr. Harrison had recently been on Joost’s radar due to her frequent posting of detailed Mars pictures, and her impressive experience with both the Curiosity and Opportunity rovers, as well as the Mars Reconnaissance Orbiter. Dr. Harrison recently used HoloLens to create a life-sized virtual model of the Curiosity rover, and when Joost tweeted her to ask if the app was downloadable, he was informed by PhD student Alireza (who had built the app) that he had used Joost’s blog to build it.

“As a space geek, I was born in the wrong country,” says Joost. “The Netherlands doesn’t have a space agency to speak of, with no rockets or launch facilities, so I never made it to becoming a space scientist or astronaut.”

“Then you see a real-life Mars scientist apparently making use of knowledge you put out there to talk about Mars rovers in public. I don’t see myself as a giant (referring to the Isaac Newton quote), but without knowing it, I apparently enabled someone to stand on my shoulders and make something extremely cool in a place and environment where I will never make it,” he added. “But that student did make it to NASA, and I unwittingly gave him a little leg up. I was elated and thankful. I am happy to help everyone.”

Joost explained how it is vitally important to share knowledge. “It’s impossible to know everything these days, and everyone needs giants’ shoulders to stand on to make things happen, and that’s helping the field as a whole move forward,” he said.

He also added that the ability to explain things is an extremely valuable skill, as it forces you to really understand what you are talking about. “Apart from that, it’s fun too. And you don’t need to wait until you are an expert - start sharing as soon as you feel you are getting a little off the ground.”

“A beginner learns easiest from people who are just-about-not-beginners anymore because they can relate to their issues. Don’t be afraid to look stupid, dare to be a beginner. Look at my blog - I go from really simple to really advanced - and back again. I start as a beginner in everything, then slowly move to become an expert, then go back to a beginner again as the technology moves on or changes dramatically. Four years ago I was a XAML expert, then I became a HoloLens beginner. And now, in a way, I am again, because HoloLens 2 is coming,” explained Joost.

“So, start sharing, learn from explaining, and help the field as a whole move forward. That’s why sharing is so important.”

Joost van Schaik is based in the Netherlands, and received the first of seven MVP Awards in Windows Development in 2011.

Check out his blog here. 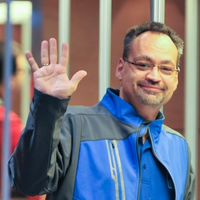