How many MVPs can you fit onto one project? MVP Susan Hanley says “at least 15!”

How many MVPs can you fit onto one project? MVP Susan Hanley says “at least 15!”

There are few things that MVPs love more than achieving goals through solid teamwork - and the collaboration between MVPs that has taken place over the course of the Office 365 deployment at Takeda couldn’t be a better example.

Takeda is a patient-focused, values-based R&D-driven global biopharmaceutical company that is committed to bringing Better Health and a Brighter Future to people worldwide. As part of its $62 billion acquisition of Shire, a global biotech company, Takeda initiated a major IT project to integrate the Shire SharePoint intranet and team collaboration sites into Takeda’s tenant. The project also included the modernization of Takeda’s classic SharePoint intranet.

In parallel, Takeda has been building several application solutions that leverage Office 365 in a variety of ways. At various stages of the projects, 15 current and former MVPs have contributed in big and small ways:

What an amazing combination of smart and talented people working together to help Takeda leverage Microsoft technology!

“While the way the team came together wasn’t formally planned, it panned out smoothly and organically over a period of a few years,” explains Susan Hanley, MVP in Office Apps and Services.

The project initially began when Shire engaged Blue Metal to help build a Day 1 intranet for their acquisition of Baxalta. Bob German, former MVP for Office and SharePoint Architecture and Development was the first MVP on the team. A few months later, Susan Hanley was brought on to the project to help formulate a governance strategy for the Shire-Baxalta integration. As the project moved forward, additional expertise was needed.

“For example, when we wanted someone to create training videos and deliver training content, Laura Rogers, MVP in Business Applications and Office Apps and Services, was put forward. Different people were added at various stages for different activities, and the existing team members nominated other people we knew who could contribute the skills that the project needed,” Sue explains.

Dave Feldman, MVP in Office Apps and Services, says “As a Takeda employee, it’s my role to bring the best, most cost effective and future proof solutions to meet the needs of a 60,000-person global company during a time of intense change. Leveraging the MVP community has allowed us to leverage the experience of diverse, talented experts focused on information architecture, development, user experience, security, and administration.”

“There’s no problem this team can’t solve, but what I’m most proud of is how the lessons learned from this project benefit so many teams and customers around the world through patterns and practices and the larger MVP community,” adds Dave. The Takeda team has shared both custom web parts and solutions on the Microsoft PnP site. For example:

“Thanks to all that got involved, we managed to not only deliver our first move from classic to modern on time with some amazing tools and technology to manage and govern the environment, but we are on track to do it a second time – with a larger team, an even more aggressive schedule, and more complexity." says Sue.

Julie Turner, MVP in Office Apps and Services, explains, “It’s so very rare to get to work with a client who wants to implement the bleeding edge of what Microsoft has to offer and fully comprehends what that can mean from a risk/reward perspective. Gathering together this team has made that journey the smoothest it can be given no one person can be an expert on every aspect of the platform. It’s a real challenge that’s immensely rewarding.”

Todd Klindt, MVP in Office Apps and Services, sums up the thoughts of every member of the team, “The Takeda project has been tremendous fun for me. A company that’s the size of Takeda has complex issues that I don’t normally get to play with it has been exciting and challenging learning the things I’ve needed to in order to keep up. I have a lot of MVP friends on this project and while I know we get along socially, I haven’t had the opportunity to work with them all this closely. Even knowing some of them as long as I have, I still get amazed by some of the tricks they have up their sleeves. I feel fortunate to be part of this team.”

Mike Gilronan is the Program Manager for the Takeda engagement. Here’s what he has to say about what it means to work with this team:

“With a team like this, you have to recalibrate what you think is possible and your timelines for delivering it. Although this team is mostly fractional (averaging about 20 hours per week on this project), they accomplish more in that time than most people do in full weeks. When so much is technically possible, it makes decisions on where the team spends its effort much more important. The MVPs also influence this a lot, as they have unmatched visibility into Microsoft’s technical direction, so they can stop us from making unwise investments at odds with that direction.”

“All these MVPs are experienced, and don’t need a lot of hand-holding. If we get them in the right roles and I’m clear to them on the objectives and deadlines, I don’t have to break down their tasks in much detail,” he continues.

“I think of managing this team like working with a group of talented musicians in a band: they still need a drummer to keep the cadence. With someone holding down the beat, they can each utilize their skills in harmony with the rest of the team.”

"I doubt I’ll ever have the opportunity to work with such a talented team again after this project, but if I do, I won’t say no,” adds Mike.

The way MVPs came together to complete this project epitomizes perfectly the power of MVPs to collaborate to achieve success. Championing teamwork and leveraging our networks of world-class minds to complete projects like this encapsulates exactly what it means to be an MVP and a member of the Microsoft community at large. 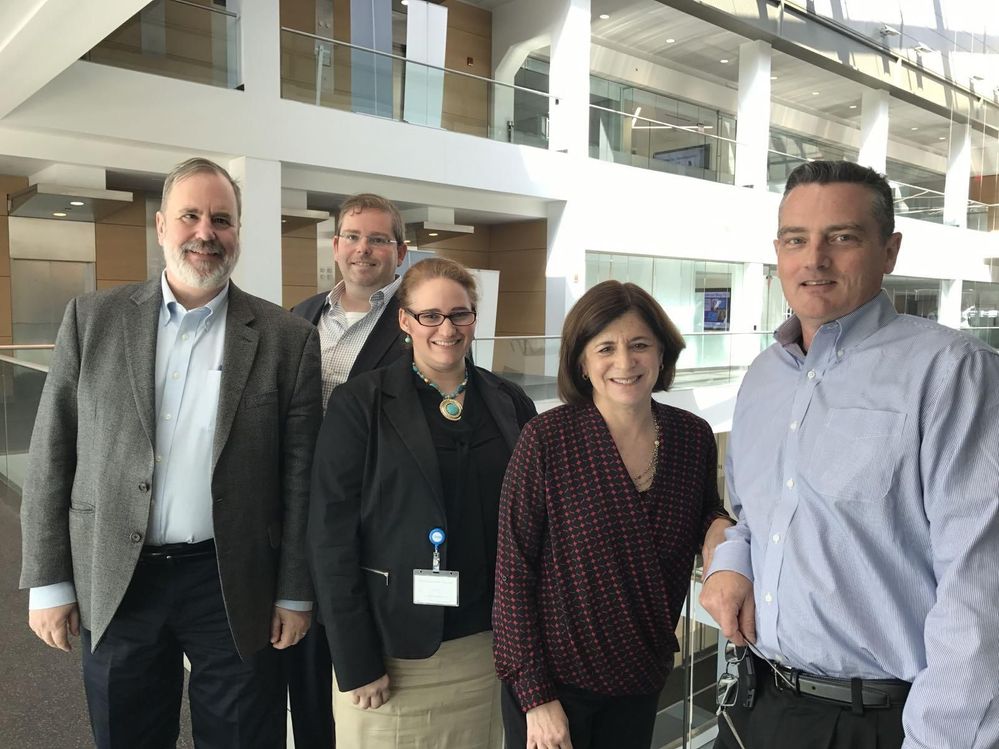 Some of the initial MVP members of the Shire intranet team (in 2017): Bob German, Dave Feldman, D'arce Hess, Sue Hanley, and Scot Hillier.