Turn on suggestions
Auto-suggest helps you quickly narrow down your search results by suggesting possible matches as you type.
Showing results for
Show  only  | Search instead for
Did you mean:
Pull Events from Event Hub from Logic app
By

This article guides you on configuring the Event Hub Trigger of Logic App and later automate the workflows for the events pulled from Event Hub.

To introduce about the Event Hub Trigger :

All Event Hub triggers are long-polling triggers, which means that the trigger processes all the events and then waits 30 seconds per partition for more events to appear in your Event Hub. So, if the trigger is set up with four partitions, this delay might take up to two minutes before the trigger finishes polling all the partitions. If no events are received within this delay, the trigger run is skipped. Otherwise, the trigger continues reading events until your Event Hub is empty. The next trigger poll happens based on the recurrence interval that you specify in the trigger's properties.

It depends on the previous poll time. 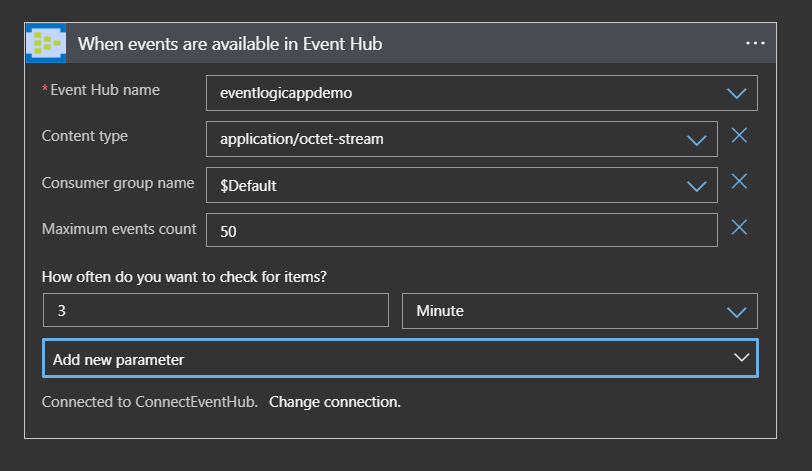 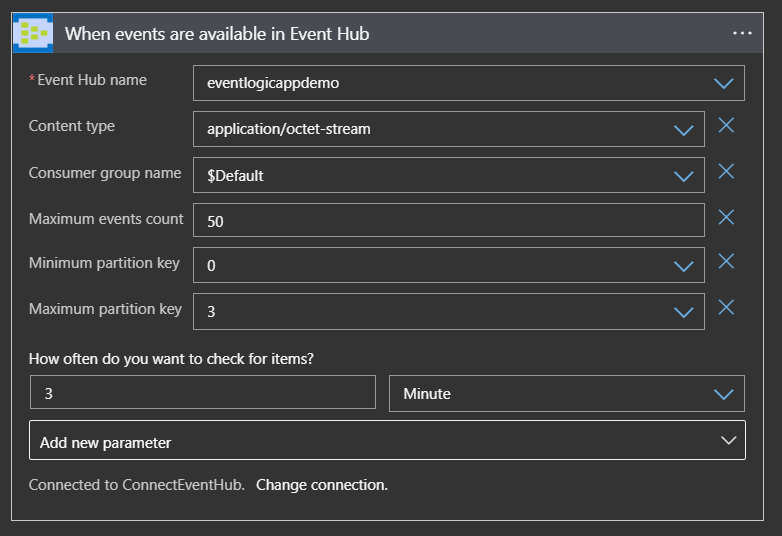 In either of the above cases we will have a Single logic App trigger polling for all the partitions with a polling interval of 3 minutes.

Suppose all the Event source data is pushed into a single partition (say partition 3), then it will take more than 12 minutes to pull the data.

Note : If the data is pushed into the Event Hub without targeting any of partitions then we cannot assume the data is distributed to all the partitions equally.

In a real time scenario, we may require to process all the events from all the partitions of Event Hub at the same time.

For this instance we shall again keep an Event Hub with only 4 partitions for demo.

Each Logic App can point to different Partitions as shown in the below image.

Later we can call the Common Logic app from all the Other Logic Apps.

The above design can be made scalable in various aspects based on number of Events and Event Hub Partitions.

Let's consider the scenario where you have more Events that are published and you will have to add more partitions to the Event hub. For now we keep it as 8 partitions.

If we have a single Logic App to poll all the partitions from 0 to 7 , it would take 24 minutes to poll all the data if we have configured to poll the Event Hub for every 3 minutes with total of 8 triggers fired.

Similarly, if we have the polling frequency set for 1 minute it would take at least 8 minutes to complete to poll all the partitions. 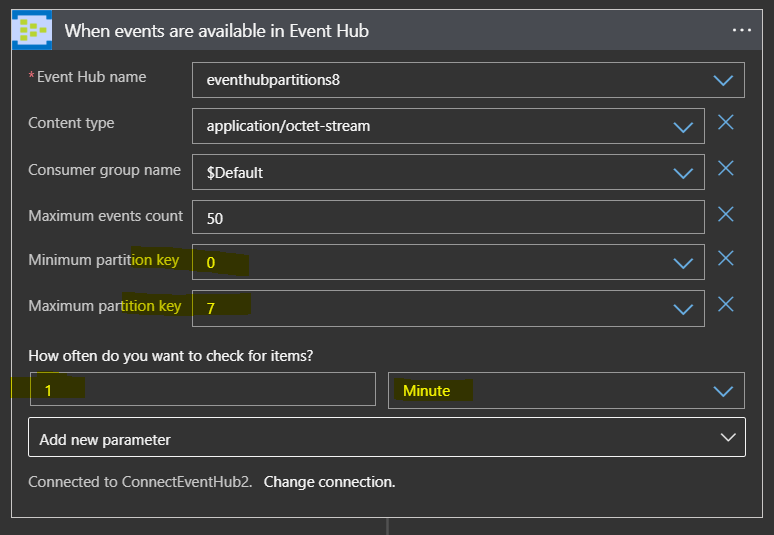 So by the time the Trigger would poll the partition which has more data the chances of overloading the EventHub would be even more because the events are not pulled from Event Hub in the rate that is received from the partition.

In Such scenarios we can add few more Logic Apps where each LA shall poll less partitions which in turn increases the frequency of poll.

For ex: we can clone 3 more Logic Apps separating the main logic of processing/automation of the Events in Child Logic Apps.

Since the major logic goes into the Child(Common Logic App) there would be drastic reduction in maintenance work. If any changes related to business can be done in Child Logic App.