Turn on suggestions
Auto-suggest helps you quickly narrow down your search results by suggesting possible matches as you type.
Showing results for
Show  only  | Search instead for
Did you mean:
Four things I like about Active Directory Administrative Center (ADAC) in Windows Server 2012
By

This is a new addition to ADAC in Windows Server 2012 and this feature certainly blew me away.

While ADAC provides a graphical interface for administrators to perform common tasks such as creating new groups, users etc., PowerShell History Viewer in ADAC, allows them to review the exact PowerShell commands for these tasks. Now, that is brilliant! Let’s face it, for those who are not well versed in PowerShell or use it every day to remember the Cmdlets, can now use it to learn PowerShell and create their own Cmdlets. As a test, I created a new user called Tester, via the graphical interface and an equivalent PowerShell command got displayed in the PowerShell history viewer (screenshot below). I can now copy it to the clipboard via the Copy button and reuse it in a script later. Furthermore, if I want to review all the calls made by PowerShell, I can simply check Show All on the top right corner and it will display all the commands recently executed by ADAC.

The screenshot below shows how to enable Recycle bin for the first time. Keep in mind, once enabled, it cannot be disabled. 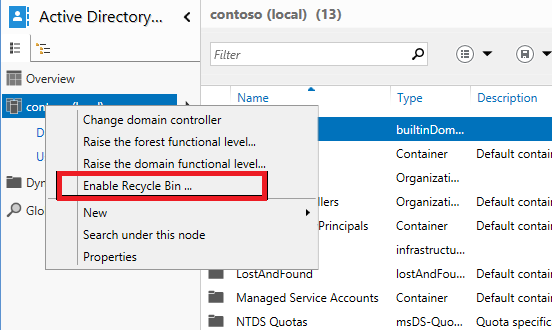 ADAC in Windows Server 2012 makes Fine Grained Password Policy management much easier and simpler due to the graphical user interface. This feature was first introduced in Windows Server 2008 to allow administrators to define different password and lockout policies for different users in the domain. However, it was difficult to manage and was not very visual.  Using the Windows Server 2012 version of ADAC, administrators can create a separate password policy for user accounts with different password needs, much more easily and quickly. First, ensure that your domain is at Window Server 2008 domain functional level or higher. Next, select New Password Settings, under the Password Settings Container which resides under System. Complete the password settings dialog box as desired and then click Add to apply this policy directly to the desired users, groups etc. And there you have it. You will really like this if you have ever set this up on Windows Server 2008 and felt the pain J 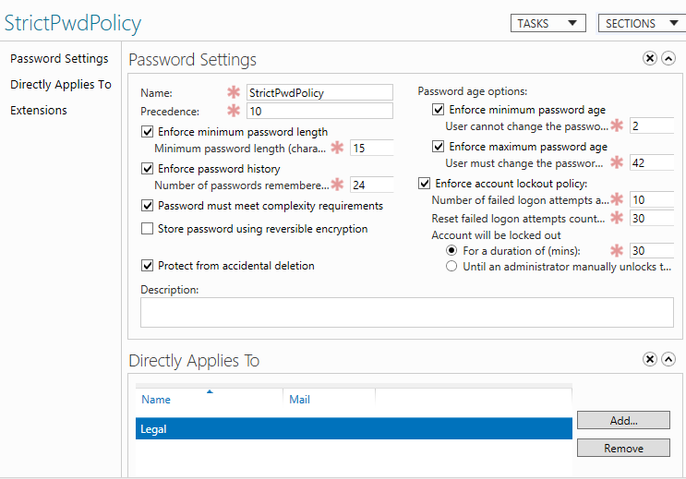 I really liked the Global Search feature in ADAC to search for objects in AD. This is not new to Windows Server 2012 as it was first introduced in Window Server 2008 R2. However, it is still one of my favorite features as it allows me to perform global search such as searching all my domains at once and not be limited to Global Catalog lookups. If I had more domains in my lab, you would see all of them listed under the navigation nodes. 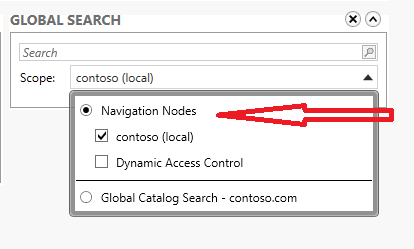 Another gem is the ability to very easily build LDAP queries. For example, if I want to search for all users who have not logged on for more than a given number of days, I can use the built in criteria (Click Add Criteria) to quickly get that information as shown below. 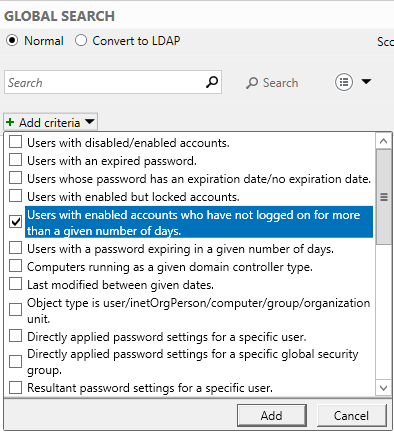 While you can’t transfer FSMO roles via ADAC today, starting in Windows Server 2008 R2 this feature is now easily available at fingertips via PowerShell using the Move-ADDirectoryServerOperationMasterRole cmdlet of AD Module. I have added few examples below:

You can view FSMO role owner with these AD-Powershell commands:

Well, these are some of the reasons why ADAC has now become a one stop shop for me when it comes to AD tasks. I am now using ADAC for all my AD administrative needs including raising the domain and forest functional level which is conveniently located under Tasks when Domain node is selected.  I therefore, invite you to start using “The Tool of the Future’ as I would like to call it