Until now, in Azure SQL Database, to gain access to server-wide information like system-wide wait-stats, resource stats etc., the Server Admin or AAD Admin was the only account with sufficient permissions since server-level permissions are not grantable in SQL Database.

Today I am happy to announce that we are bringing built-in roles that in effect hold permissions applicable to all databases including databases residing in elastic pools a on a logical server for Azure SQL Database. This extends to the logical master-database which contains certain system-wide information. We are starting with 3 new roles:

The new server-roles that can be assigned to server logins to enable customers to assign and delegate job functions for server-wide metadata access and access to certain management commands without requiring Server Admin or AAD Admin privileges. This helps comply with the Principle of Least Privilege and implement role separation.

Server-roles are not a new concept in the SQL Server universe, but for Azure SQL Database, our PaaS service offering, the server as such is just a logical concept. More on this here: What is a server in Azure SQL Database and Azure Synapse Analytics? | Microsoft Docs and Azure SQL databases in logical servers, elastic pools, and managed instances - Microsoft Tech Commun....

Because of this architectural difference, the same mechanics as for Managed Instance or SQL Server in a VM do not apply: Databases residing on the same logical server may not reside on the same physical server. This poses some challenges, but I am happy that we can bring an almost identical experience that works for the other Service offerings as well: Server level roles with permissions that have effects on any database on the logical server.

Each of these new server-roles includes a specific set of permissions. In SQL Database those permissions cannot be assigned individually on the server scope but using those roles one can grant them to a SQL Login. This is a new method to grant server permissions across a logical server and all databases hosted on that logical server in Azure SQL Database, aside from assigning Server/AAD Admin.

In the following let’s have a look at each role individually:

The ##MS_DefinitionReader##-role predominantly will be useful for read-only server-auditing where an auditor will need to see the contents of static system metadata such as Login/principal names, Firewall settings, permissions of principals and of course object definition (code). It will often be combined with membership in the ##MS_ServerStateReader##-role. 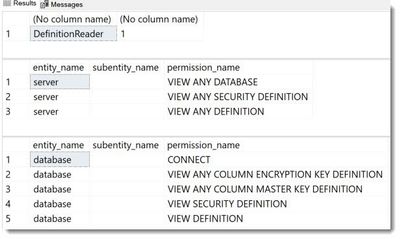 Members of the ##MS_DefinitionReader## fixed server role can read all catalog views that are covered by VIEW ANY DEFINITION, respectively VIEW DEFINITION on any database on which the member of this role has a user account.

The ##MS_ServerStateReader##-role is ideal for read-only performance Monitoring and troubleshooting access. It will often be combined with membership in the ##MS_DefinitionReader##-role to see the actual names and definition (code) of objects involved.

It has VIEW SERVER STATE-permission on the Server which covers and hence includes the VIEW DATABASE STATE on any database that a principal in that role has access to. 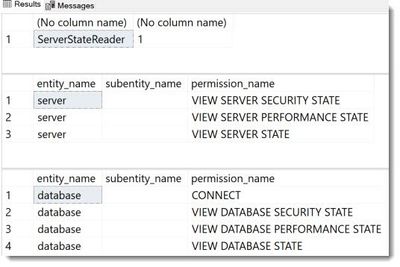 Members of the ##MS_ServerStateReader## fixed server role can read all dynamic management views (DMVs) and functions that are covered by VIEW SERVER STATE, respectively VIEW DATABASE STATE on any database on which the member of this role has a user account.

This role allows querying several DMVs that exist solely in the master database such as sys.resource_stats that specifically contain information concerning the whole server, or sys.elastic_pool_resource_stats for all elastic pools on a logical server.

To make this role more useful and generally help customers comply with the Principle of Least Privilege and implement proper role-separation, we changed the permission requirements for several DBCC commands. Those formerly requiring elevated privileges are now covered by VIEW SERVER STATE – the permission which this role holds:

The ##MS_ServerStateManager##-role is useful for delegating management tasks without requiring to assign full admin permissions. 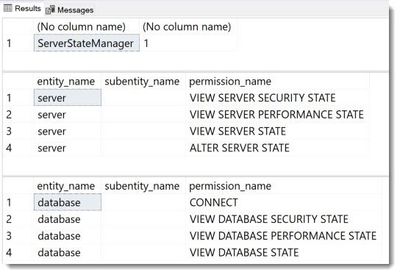 Big kudos to all the team-members involved in this seemingly small addition that is much more complex than apparent: Maciej Szeszko, Steven Gott, Nikolas Ogg from engineering and Dimitri Furman for being a great helper and advisor