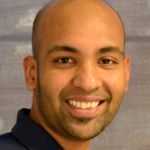 In this article, we'll detail the process of migrating from SQL Server running on a Linux distribution to Azure SQL Managed Instance using the Azure SQL Migration extension in Azure Data Studio.

When using the Azure SQL Migration extension to migrate your SQL Server database(s) running on Linux, the process is identical to SQL Server running on a Windows Operating System as detailed in the online or offline migration tutorials to Azure SQL Managed Instance.  The key difference, specifically when using a network share as the source for database backups, is the format and underlying configuration of the network share for Linux Operating System.

When SQL Server is hosted on a Linux Operating System, the BACKUP DATABASE syntax shown below is not valid.  Linux does not natively support the SMB/CIFS protocols.

At the same time, the Azure SQL Migration extension does not support entering a local filesystem path as a source for backup files. This is not a limitation of the extension but instead is expected behavior as a result of the use of the self-hosted integration runtime (SHIR) to perform the backup file copy process.

So how do databases written to a location on the local Linux filesystem find their way to a SMB file share that is compatible with the Azure SQL Migration extension?

Note: This article leverages Samba in some of the scenarios listed below to enable easy migration from SQL Server on Linux to Azure. See install and configure Samba to learn more about the setup.

In this scenario, we’ll mount an Azure file share on the Linux server file system and write database backups there.

On the Azure file share page in the Azure portal page, choose Connect.

The Connect blade will appear to the right.  In this example, we want to mount our migrationbackups Azure Files file share on a Linux server, so we’ll choose Linux.  Doing so will present the pre-written script necessary that performs the following: 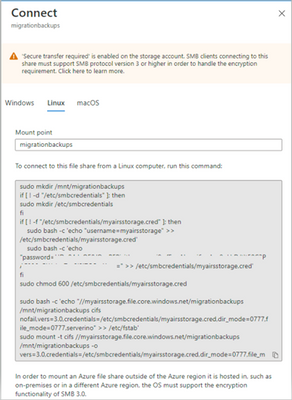 After successful execution of the script, let’s backup the NorthWind database from our SQL Server on Linux environment to the /mnt/migrationbackups local directory.  Similar to the configuration described in the first migration scenario, the backup is actually being written to the file system that is mounted to /mnt/migrationbackups, which in this case is an Azure Files file share.

Now we can use the Azure SQL Migration extension in Azure Data Studio to migrate the NorthWind database, specifying the Azure file share as our source backup location. 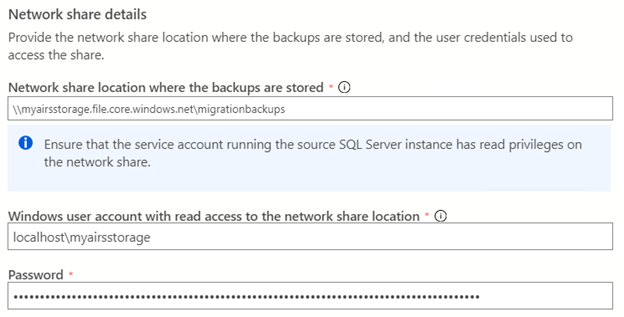 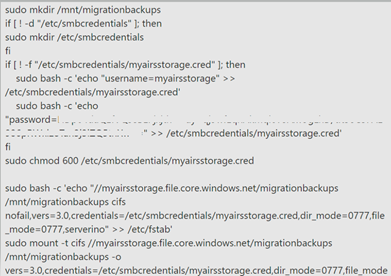 Migration Scenario 2 – Create an SMB share on a Linux OS

In this configuration we’ll use Samba to make the Linux file system location appear to be a SMB share and therefore enable it to be used with the Azure SQL Migration extension.

This time we’ll backup the NorthWind database to the /var/opt/DBbackups/NorthWind directory.  That directory is configured within Samba to act as a SMB share (like a “Windows share”).

And again, using Samba, you can connect to the BackupShareOnLinux SMB share that is hosted on the Linux server. 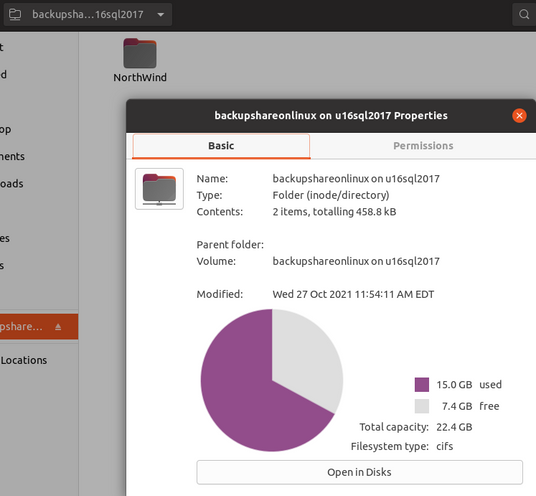 Furthermore, that SMB file share path can now be used in the Azure SQL Migration extension to perform database migrations.

Migration Scenario 3 – Mount an SMB share on a Windows OS

In this scenario, the SQL Server instance is hosted on Ubuntu 16.04 LTS as shown below.

Let’s take a backup of the NorthWind database and write it to /var/opt/SQLbackups.  To SQL Server, this looks and behaves as if it were a local filesystem on the Linux server.

Looking at the backup history tables in the msdb database, we see that the database backup was successfully written to /var/opt/SQLbackups/NorthWind/NorthWind_FULL.BAK.

And we can also see the backup file in /var/opt/SQLbackups/NorthWind in Linux.

But using the power of Samba and CIFS-UTILS, the NorthWind database backup was actually written to the \\SAN0\DatabaseBackups\NorthWind SMB share.

Now we can supply the SMB file share path in the Azure SQL Migration extension to perform the migration to Azure SQL Managed Instance.