Turn on suggestions
Auto-suggest helps you quickly narrow down your search results by suggesting possible matches as you type.
Showing results for
Show  only  | Search instead for
Did you mean:
Tuning BeeGFS and BeeOND on Azure for specific I/O patterns
By

Tuning BeeGFS and BeeOND on Azure for specific I/O patterns

BeeGFS and BeeGFS On Demand (BeeOND) are popular parallel file systems used to handle the I/O requirements for many high performance computing (HPC) workloads. Both run well on Azure, and both can harness the performance of multiple solid state drives (SSDs) to provide high aggregate I/O performance. However, the default configuration settings are not optimal for all I/O patterns. This post provides some tuning suggestions to improve BeeGFSand BeeOND performance for a number of specific I/O patterns.

The following tuning options are explored and examples of how they are tuned for different I/O patterns are discussed:

How and where you deploy BeeGFS in relation to the compute node affects latency, so make sure they are in close proxmity to one another. Follow these pointers:

When deploying a BeeGFS or BeeOND parallel file system on Azure using managed disks for storage, the number and type of disks need to be carefully considered. The VM disks throughput and IOPS limits dictate the maximum amount of I/O that each VM in the parallel file system can support. Azure managed disks have built-in redundancy. At a minimum, locally redundant storage (LRS) keeps three copies of data, and so RAID 0 striping is enough. 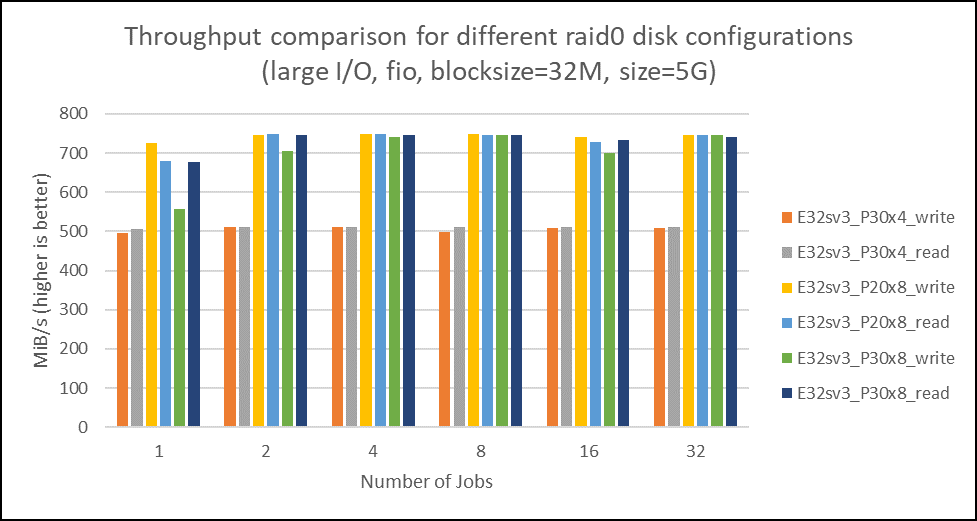 In the case of local NVMe SSDs (such as Lsv2), BeeGFS storage targets that have a single NVMe disk give the best aggregate throughput and IOPS. For very large BeeGFS parallel file systems, striping more NVMe disks per storage target can simplify the management and deployment.

Note that the performance of a BeeGFS parallel file system that uses ephemeral NVMe disks (such as LSv2) is limited by the VM network throttling limits. In other words, I/O performance is network-bound.

Fig. 2. Performance of reads and writes varies by number of NVMes per VM. The best aggregate throughput for BeeGFS was using L8sv2.

Chunk size and number of targets

BeeGFS and BeeOND parallel file systems consist of several storage targets. Typically, each VM is a storage target. It can use managed disks or local NVMe SSDs, and it can be striped with RAID 0. The chunk size is the amount of data sent to each target, to be processed in parallel. The default chunk size is 512 K, and the default number of storage targets is four as the following script shows:

For example, to set the chunk size to 1 MB and number of storage targets to 8:

A rough formula for setting the optimal chunksize is:

To increase the number of metadata servers in a BeeOND parallel file system to 4:

The shared parallel I/O format is a common in HPC in which all parallel processes write/read to/from the same file (N-1 I/O). Examples of this format are MPIO, HDF5, and netcdf. The default settings in BeeGFS and BeeOND are not optimal for this I/O pattern, and you can improve performance significantly by increasing the number of storage targets.

It is also important to be aware that the number of targets used for shared parallel I/O will limit the size of the file.

Fig. 4. By tuning BeeOND (increasing the number of storage targets), we get significant improvements in I/O performance for HDF5 (shared parallel I/O format).

BeeGFS and BeeOND are primarily designed for large throughput I/O, but there are times when the I/O pattern of interest is high IOPS. The default configuration is not ideal for this I/O pattern, but some tuning modification can improve the performance. To improve IOPS, it is usually best to reduce the chunk size to the minimum of 64 K (assuming the I/O blocksize is less than 64 K) and reduce the number of targets to one.

Fig. 5. BeeGFS and BeeOND IOPS performance is improved by reducing the chunk size to 64 K and setting the number of storage targets to one.

Fig. 6. BeeOND metadata performance can be significantly improved by increasing the number of metadata servers.

With HPC on Azure, don’t just accept the configuration defaults in BeeGFS or BeeOND. Performance tuning makes a big difference in the I/O throughput. For more information about tuning, see Tips and Recommendations in the BeeGFS documentation.