Turn on suggestions
Auto-suggest helps you quickly narrow down your search results by suggesting possible matches as you type.
Showing results for
Show  only  | Search instead for
Did you mean:
Improve Performance of Read Intensive Workloads on Azure DB for PostgreSQL using Query Caching
By

When building cloud native applications using managed services, latency between the application and database layer can add to the query response times impacting overall application performance. The impact is visible in latency sensitive application like a gaming workload or digital payment app and can potentially impact the end user experience for customers.

While leveraging managed cloud services for building your applications, one of the challenge (or blessing) is, the placement of application VMs, underlying database servers and nodes within a region is abstracted from you so if the application server and database node are not collocated, the network latency between the application and the database node can vary. As a result, if you are running your benchmark tests or comparing the performance of the application running on-premises vs that with Azure database for PostgreSQL service, you might see difference in the query response times.

For data modification queries, it is therefore recommended to minimize singleton transactions and leverage batching with large batch size to minimize the round trip between the application and database server. For query performance, one of the ways to improve query response time and latency is by leveraging client-side query caching especially when you are designing and architecting for a mission critical application with low latency requirements. Query caching is one of the common techniques leveraged by developers to improve query response times. The advantages of client-side query caching are

The disadvantages of the caching is, the data can be stale and needs to be refreshed frequently so for OLTP or highly transactional workload with frequent data modification, query caching can be an overhead and is not recommended. For read heavy workloads, if the data is less frequently updated especially for data warehousing or ETL scenarios, the benefits of query caching can outweigh the overhead of maintaining an external query cache.

Currently, Redis cache or Memcached are the popular external query caching solutions. In addition, with PostgreSQL, there are community developed open source proxy solutions like Pgpool-II or proprietary solutions like Heimdall Data which can provide query result-set caching to improve overall performance of the application.

To give you some stats to back abovementioned theory, we ran some tests by provisioning a Linux VM on Azure to run pgbench with Pgpool-II configured for query caching against Azure Database for PostgreSQL service. 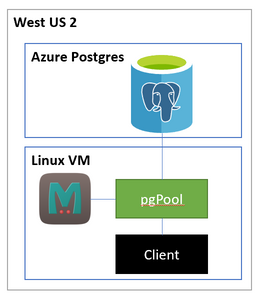 With No Query Caching

Let’s first assume no caching. For testing, we use a simple query and an aggregation query as shown below. In all cases, queries are executed over an already existing connection, so times never include actual connection establishment time.

For simple queries, response time for simple query is not dominated by query execution time but by latency between client and server .

With query caching we cannot only save query execution but fully eliminate communication from client to the PG server for a cache hit.

For queries that can’t be cached, as before, caching adds some overhead as every query needs to be analyzed and checked if it is a cacheable query or not.

We can see that using query cache increased response time from ~2.3ms to ~2.6ms. (the explain option makes the query non-cacheable).

On first execution of a cacheable query overhead is slightly higher as above; query and result needs to be written to cache as an additional step.

In the cached scenario the query result can be retrieved locally, without having to send the query to the remote server. The performance improvement is substantial in this case, even for the simple query. 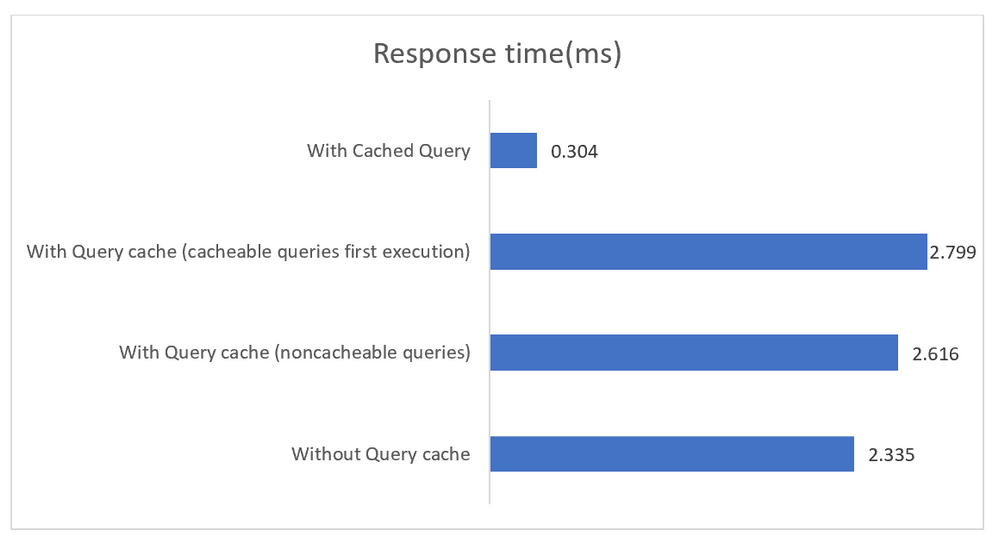