Turn on suggestions
Auto-suggest helps you quickly narrow down your search results by suggesting possible matches as you type.
Showing results for
Show  only  | Search instead for
Did you mean:
Kafka ingestion into Azure Data Explorer - Part 1
By

Apache Kafka is an open source streaming platform and Azure Data Explorer is a big data analytical database, purpose-built for low latency and near real time analytics on all manners of logs, time series datasets, IoT telemetry and more.  The Azure Data Explorer KafkaConnect sink connector makes ingestion from Kafka, code free and configuration based, scalable and fault tolerant, easy to deploy, manage and monitor.  This article, is paired with a hands-on-lab, and strives to demystify the integration, and is the first of a series focused on Kafka ingestion.

Apache Kafka is a distributed streaming platform with partitioning, replication, fault tolerance and scaling baked into the architecture and design.  It offers the scalability of a distributed file system, supporting hundreds of MB/s throughput, TBs of data per node in a Kafka cluster, and can run on commodity hardware on-premise and on cloud infrastructure just as well.  It offers the durability of a database and strict ordering.  There is a whole ecosystem of open source distributed computing technologies that integrate with Kafka.  Kafka is publish-subscribe model based, secure, mature, robust, enterprise ready, and over time has become the de-facto open source streaming platform and is part of any open source big data architecture involving real time processing.

Azure has multiple Kafka offerings.  HDInsight Kafka 4.0 (Kafka 2.1) is a Microsoft Azure first party managed Kafka PaaS.  From an ISV perspective, there is Confluent Cloud, a managed Confluent Kafka PaaS, and Cloudera Data Platform, a managed offering from Cloudera.  IaaS is an option as well with Confluent Enterprise Platform on Azure Kubernetes Service managed by the Confluent operator.

Kafka use cases and eco-system of services

Kafka can be leveraged in modern application architectures, in IoT use cases, log processing use-cases and in practically any real-time and near-real-time processing use cases.  Kafka was born as a distributed commit log, but has evolved to include an eco-system of complementary services, across open source, Confluent community license and Confluent Enterprise.  A few popular ones are Kafka streams, Schema registry, KafkaConnect and ksqlDB.  Kafka streams is an open source streaming client library for building real time applications on top of Kafka.  Schema registry provides centralized schema management and compatibility checks as schemas of events published to Kafka topics evolve.  ksqlDB is the streaming SQL engine for Kafka that you can use to perform stream processing tasks using SQL parlance.

What about Kafka integration?

Kafka has a great offering in the integration space with KafkaConnect - a standardized, configuration based, scalable, fault tolerant framework to integrate from source systems to Kafka, and from Kafka to target systems.

As part of the connector development, you just have to plugin the integration bits for the source or sink system into the framework code base. The framework abstracts out or simplifies offset management, task distribution, parallelization, scaling, retries, failure management and further supports plugin based per record transformation.  Kafka has a number of KafkaConnect source and sink connectors, and it is preferable to leverage a KafkaConnect connector (code free, and configuration based deployment) if available, over writing custom producer or consumer code.  You can find a listing of Confluent certified Kafka connectors at Confluent hub.

Kafka and Azure Data Explorer - positioning
Wherever there is Kafka in the architecture landscape, especially in use-cases involving IoT telemetry, time series, all manners of logs and near real time processing, Azure Data Explorer has a complementary place as a big data, analytical database for low latency analytics.

As mentioned in the introduction, Azure Data Explorer has a KafkaConnect sink connector that can be leveraged for Kafka ingestion and is the focus of this blog post.

What’s involved besides Kafka and Azure Data Explorer for the integration?

In the sample above, the Kafka topic "crimes" is mapped to Azure Data Explorer database "crimes_db", table "crimes_curated", with Kafka messages in json and with the table mapping "crimes_curated_mapping".  Here we are using an Azure Active Directory service principal as the identity to persist to the table, and grants needs to be in place to allow the same.  Details of the full set of properties and their usage are documented here.

5. On your local machine, modify the values.yaml from #3, to leverage the image you published from #4, and update the bootstrap server list with those of your Kafka broker IPs/broker load balancer IP

7. Start the connector tasks using the KafkaConnect REST API - this includes the Kusto sink properties that details the Kafka topic to Azure Data Explorer table amongst other configuration.

You should see the messages published to Kafka flow through to Azure Data Explorer. The diagram below is a pictorial representation.  The hands on lab referenced further on in this article delves deep into the individual above steps. 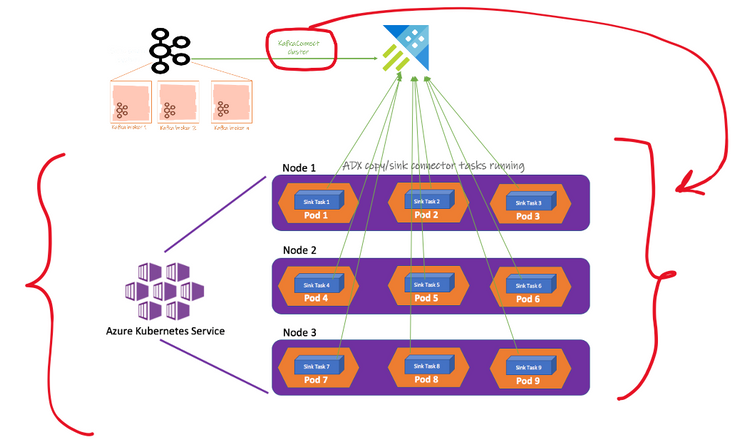 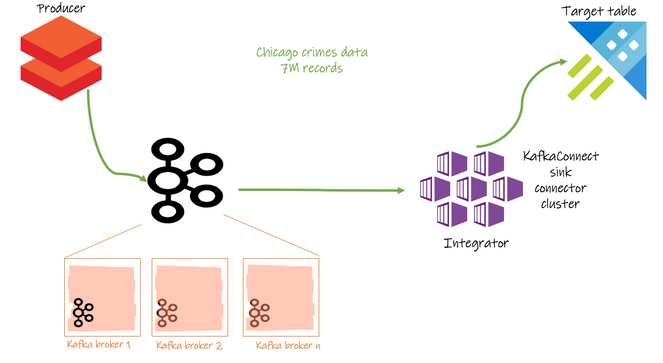 In conclusion
With the KafkaConnect Kusto sink connector we have a great integration story from Kafka to Azure Data Explorer.  Its code-free and configuration based, its scalable, fault tolerant, easy to deploy, manage and monitor.  The connector is *open source* and we welcome community contribution.