Text to Speech (TTS), part of Speech in Azure Cognitive Services, enables developers to convert text to lifelike speech for more natural interfaces with a rich choice of prebuilt voices and powerful customization capabilities. At the //Build 2021 conference, we are excited to announce several new features and improvements to TTS that address a variety of needs from customers globally.

Now more than ever, developers are expected to build voice-enabled applications that can reach a global audience. With the same voice persona across languages, organizations can keep their brand image more consistent. To support the growing need for a single voice to speak multiple languages, particularly in scenarios such as localization and translation, a multi-lingual neural TTS voice is brought out in public preview.

Hear how Jenny Multilingual speaks different languages in the samples below:

With this new voice, developers can easily enable their applications to speak multiple languages, without changing the persona. Learn how to use the multi-lingual capability of the voice with SSML.

What’s more, this powerful feature is also available in public preview on Custom Neural Voice, allowing customers to build a natural-sounding one-of-a-kind voice that speaks different languages. Custom Neural Voice has enabled a number of global companies to build realistic voices that resonate with their brands. For example, BBC, Swisscom,  AT&T and Duolingo.

This cross-lingual adaptation feature (preview) brings new opportunities to light up more compelling scenarios. For example, developers can enable an English virtual assistant’s voice to speak German fluently so the bot can read movie titles in German; or, create a game with the same non-player characters speaking different languages to users from different geographies. In this demo, Julia White presents a keynote in a mixed-reality world, using her virtual voice in Japanese, trained from English data.

Below samples show a custom neural voice in different languages, trained from the same speaker’s voice data in UK English.

TTS output samples in other 13 other languages: 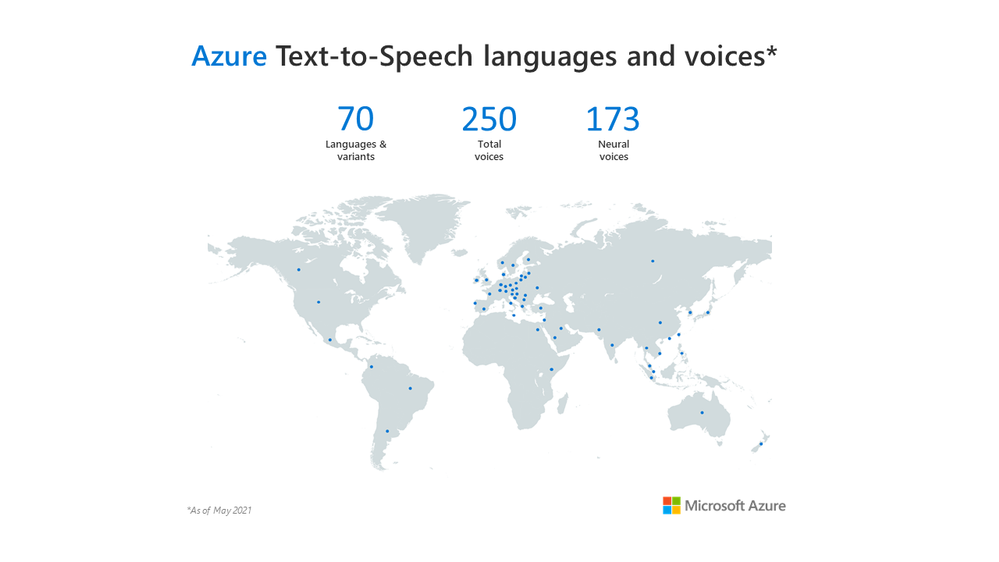 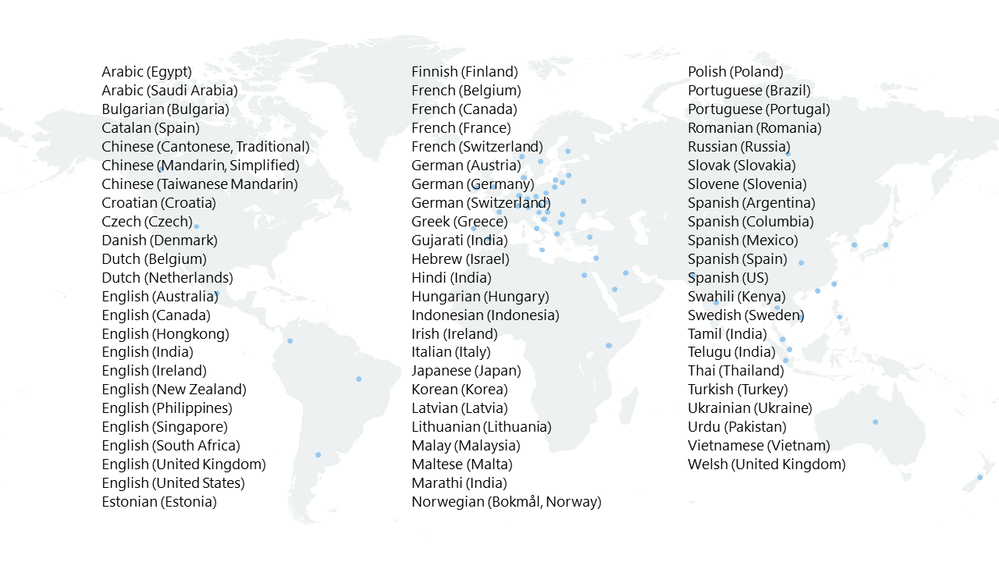 You can also check out these voices in our demo on Azure or through the Audio Content Creation tool with your own text.

Different voice characteristics are often expected in different use cases. For example, when creating a customer service bot, developers may prefer a voice that sounds professional, mature, and experienced. While building an app that reads stories to kids, developers may want to use a kid voice, so it better resonate with the audience.

Here we introduce 11 new neural voices in public preview that are recently added to the US English portfolio, enabling developers to create even more appealing read-aloud and conversational experiences in different voices. These new voices are distributed across different age groups, including a kid voice, and with different voice timbre, to meet customers’ requirements on the voice variety. Together with Aria, Jenny, and Guy, we now offer 14 neural TTS voices in US English.

Five Chinese (Mandarin) voices - Yunxi, Xiaomo, Xiaoxuan, Xiaohan and Xiaorui, were released as public preview in November 2020, optimized for conversational and audio book scenarios. During the preview, these voices have been widely used by many customers in various scenarios. Today we are glad to announce the general availability of these voices across more regions. Together with Xiaoxiao, Xiaoyou Yunyang, and Yunye, 9 neural voices are supported in Chinese (Mandarin).

A TTS voice personifies an application. The more natural the voice is, the more convincing it can be. While continuing to support more languages and offering more voice choices, we also keep improving the quality of existing voices, so we continue to help customers bring better voice experience to their users.

One challenging area of the continuous quality improvement is the naturalness of the question tone. When pronounced incorrectly (e.g., performing a rising tone to a falling tone at the end of the sentence), a question may not be understood properly. We have recently improved the question tones for the following voices: Mia and Ryan in English (United Kingdom), Denise and Henri in French (France), Isabella in Italian (Italy), Conrad in German (Germany), Alvaro in Spanish (Spain),and Dalia and Jorge in Spanish (Mexico).

Text-to-Speech is part of Speech, a Cognitive Service on Azure. To learn more about the Speech service updates, go to this blog.

By offering more voices across more languages and locales, we anticipate developers across the world will be able to build applications that change experiences for millions. Whether you are building a voice-enabled chatbot or IoT device, an IVR solution, adding read-aloud features to your app, converting e-books to audio books, or even adding Speech to a translation app, you can make all these experiences natural sounding and fun with Neural TTS.

If you find that the language which you are looking for is not supported by Azure TTS, reach out to your sales representative, or file a support ticket on Azure. We'd be happy to engage and discuss how to support the languages you need. You can also customize and create a brand voice with your speech data for your apps using the Custom Neural Voice feature.

Let us know how you are using or plan to use Neural TTS voices in this form. If you prefer, you can also contact us at mstts [at] microsoft.com. We look forward to hearing about your experience and look forward to developing more compelling services together with you for the developers around the world.

Add voice to your app in 15 minutes

Explore the available voices in this demo