Yammer’s vision is to empower and connect every employee to make better decisions, faster. As part of our mission to help users work from anywhere, the Yammer team has a number of new mobile features to announce. These features include updates around mobile accessibility, improved mobile notifications, new group header offerings, mobile UI improvements and a redesign of the iPad mobile app.

Users will be seeing these changes as they are tested and released over the next few months.  Additional details are listed below.

The first category of updates is focused on new accessibility features.  On Android, Yammer will support keyboard navigation across UI elements. On the iOS platform, users who have selected large text fonts on their systems settings will have large text automatically enabled in Yammer. 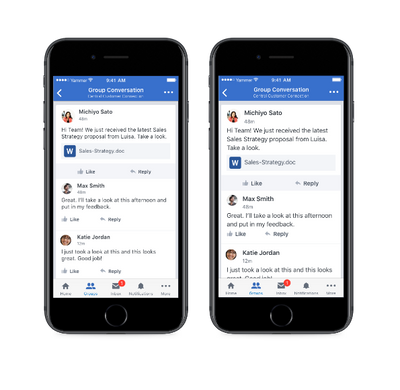 Large text support on iOS – before and after screenshots

The second category of updates is around mobile notifications.  To match the web experience, users will receive the same types of push notifications for conversations that would show up in their Inbox (i.e. announcements, messages where users are mentioned, when someone replies to a user, etc.).  At the same time, Yammer will manage the number of notifications so users working regularly in Yammer will not get inundated with notifications on conversations that they have already seen.  Users who have not engaged recently and have gotten a new like or follower will also be notified. 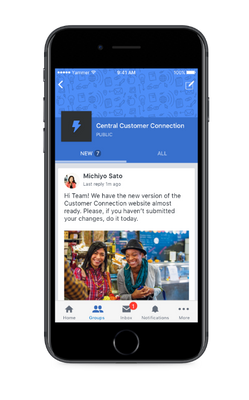 The next category of updates is around mobile UI improvements for all platforms.  This affects iPad, iPhone, and Android.  Features currently available on web that will be rolled out to all mobile platforms include:

In an effort to deliver the same experience on iPad and iPhone, Yammer will redesign the navigation structure for iPad.  Going forward, the changes will also enable new features to be rolled out at the same time on both clients. 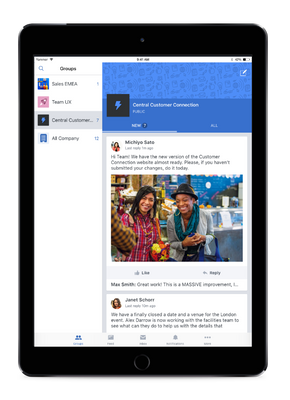