Turn on suggestions
Auto-suggest helps you quickly narrow down your search results by suggesting possible matches as you type.
Showing results for
Show  only  | Search instead for
Did you mean:
How Microsoft Marketing and Consumer Business Radio Show use Live Events in Yammer
By 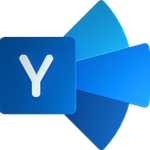 Microsoft has been going through transformation of their own and recently launched Live Events. Various groups throughout the organization have started to use it as part of their communication strategy to engage employees.

Read more details about the different types of production, experiences and outcomes on the IT Showcase Blog.

For one group, they are using live events in Yammer. Here’s a summary of their story from the IT Showcase Blog that shares how MCB Radio uses these tools in the real world.

“MCB Radio, a 30-minute broadcast hosted by Microsoft Chief Marketing Officer Chris Caposella, has adopted the live event capabilities in Yammer and Microsoft Stream for the program’s live broadcast and content-sharing needs. In each broadcast, Caposella and his guests explore inclusion from different perspectives in an informal discussion on a topic that is important to the guest. 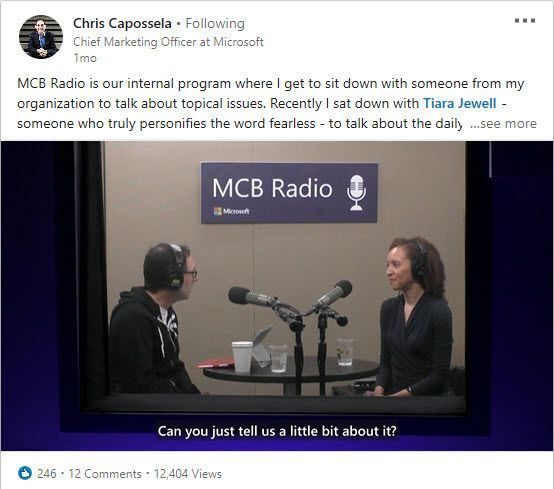 Launched in 2019 by the Marketing and Consumer Business organization at Microsoft, MCB Radio is open to the entire company.

The live-broadcast format enables audiences to experience Microsoft’s growth mindset in action by:

For each broadcast, the MCB Radio team works directly with a producer at Microsoft Studios to manage the live video radio broadcast. Figure 3 outlines how the MCB team initiated event coordination. The event production flows seamlessly from pre-event planning to post-broadcast sharing.

The event team is able to seamlessly work between Microsoft Teams, Microsoft Stream, and Yammer to host events geared to diverse audiences for each unique broadcast. Each broadcast, although often discussing sensitive topics, can be made more consumable and approachable for a wider audience.

With live events in Microsoft 365, the MCB Radio team was able to:

Host your own Live Event in Yammer

If you’d like to do something similar within your own organization, we’ve pulled together best practices and resources in the Live Events Playbook.

Additional insights and lessons learned in the variety of live event types can be found in the full article on the IT Showcase Blog.