Turn on suggestions
Auto-suggest helps you quickly narrow down your search results by suggesting possible matches as you type.
Showing results for
Show  only  | Search instead for
Did you mean:
[Customer Story] How the largest UK rail operator uses Yammer to empower LGBT+ Communities
By

In February of 2019 we launched the LGBT+ network via Yammer at Govia Thameslink Railway (GTR). We are the largest UK rail operator and have stations at over 200 locations across the South East of England.

At the time Yammer was relatively in its infancy, with a small, but enthusiastic user base. We quickly realised the potential of Yammer for the group, as it seemed a natural place to keep people updated, share ideas and develop the network across the business. Yammer has helped to break down physical barriers of location and shift work patterns to enable everyone to stay in touch. As the Yammer group has grown, so too has the profile of the LGBT+ network at GTR, led by employees.

Collaborating on the details

One thing we have been particularly proud to have collaborated on through Yammer was our participation in the biggest Pride festival in Brighton. We were able to secure funding to add LGBT+ branding to a train with executive support, which for a group like the LGBT+ network is paramount. The #trainbow, as it was so called, was especially meaningful as it was designed by our own design apprentice Mags Luckhurst, who is a member of the LGBT+ network. 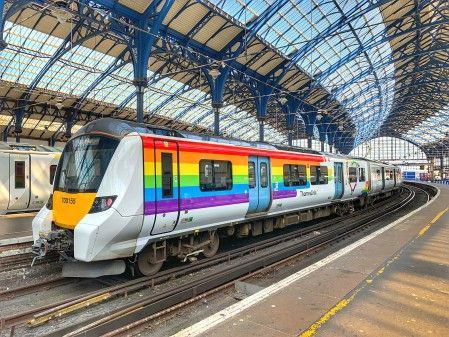 We used Yammer to help the group decide the branding for promotional merchandise and the float design, specifically utilising the poll functionality to make things fair and impartial. The group also used Yammer to crowdsource the playlist for our float, which meant that we had an eclectic and exciting mix of music to play during the day.

Alongside the support for Brighton and Hove Pride celebrations, the group has also been used to address issues in the business such as trans rights and recognition, LGBT+ history and general advice and support for those questioning their sexuality and gender.

Most recently we used the Yammer announcement feature to great effect to promote the appointment our official board members – namely Chair, Policy and Education Officer, Communications Officer/Secretary and Events Officer. We will now look to set down some group objectives for the coming year, as well as working out what our focus should be within GTR.

We have over 150 members in our LGBT+ network on Yammer, and I for one am looking forward to seeing the community develop and grow over the next six months. I think it’s more important than ever that LGBT+ issues are given priority within organisations, and by working together we can ensure this is the case.

I’d strongly recommend trying to use Yammer to help develop your own internal LGBT+ network within your company, as it really is a fantastic way to keep in touch and ensure colleagues are informed and excited about what’s going on in the Diversity and Inclusion space in your workplace.

For more resources about starting the Diveristy and Inclusion conversation in your own Yammer network, check out this blog post or watch this Ignite Session.

Caroline works in the Internal Communications team at Govia Thameslink Railway. Having previously worked at several social media agencies and media publishing outlets, she came on board at GTR to launch a new ‘community’ app for colleagues. This ultimately led to the development and launch of Yammer. In her spare time she enjoys playing, writing and listening to music.