Turn on suggestions
Auto-suggest helps you quickly narrow down your search results by suggesting possible matches as you type.
Showing results for
Show  only  | Search instead for
Did you mean:
2020 - When the #YearOfYammer delivered
By 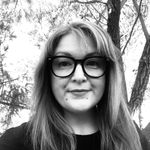 When did the Year of Yammer begin? When did it end? Depends on how you cut the numbers, but if 2019 was the #YearOfYammer announcements, then 2020 is absolutely the year when Yammer delivered.

The first taste (or tease) about the Year of Yammer came from Mike Holste in May 2019 causing a stir in Digital Workplace circles. Yammer at that stage was a much loved platform that Microsoft had taken under its wing, but there had been a hiatus in progress and much debate about where it fit within the Microsoft 365 toolset.

Fast forward to October 2019 and Ignite, where #YearOfYammer was officially launched and the pillars of Connection, Leadership, Inclusion, Knowledge and Community. The Future of Yammer was announced with a long list of feature releases to be expected in the coming year.

I spent some time with the Yammer team in early 2020 as they rounded out Ignite the Tour in Australia. At that time we in the community had only just started to see the big changes that had been announced the year before. Now, as 2020 reaches a close the new Yammer is generally available and has been since July.

Connection
Yammer always been about connection, but keeping that at the core is something which the Yammer team feel passionate about. When I spoke to Jason Mayans (Head of Product and Analytics for Yammer) he spoke about how giving people a way to feel more connected and have a voice at work drives what they do.

You can make a connection with Yammer by:

Resources to help make a connection: 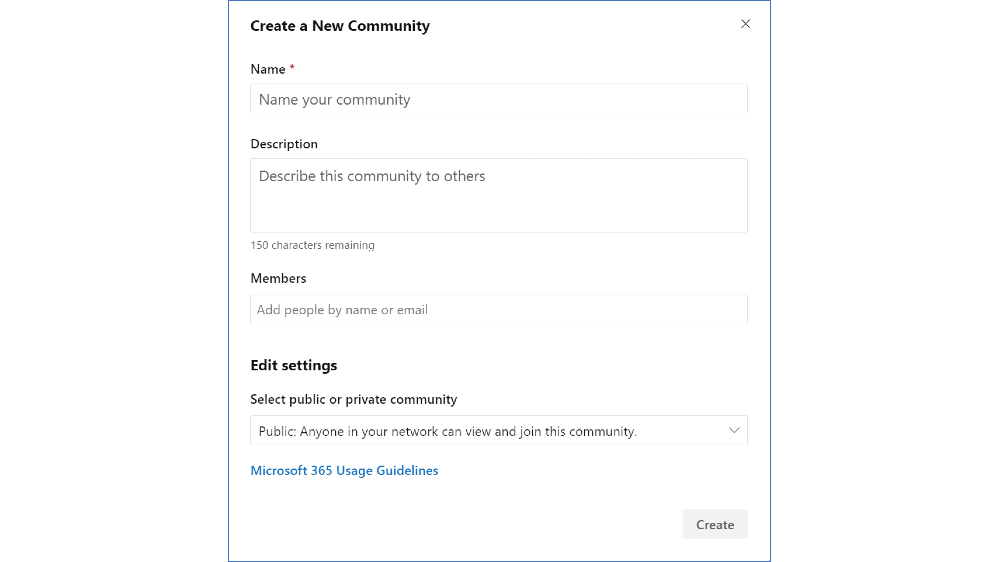 Leadership
The key to Yammer, has and likely always will be, strong leadership from the top down. This can be achieved in big or small organisations.

At NEXTDC we are an SME (small to medium enterprise) size, but have strong and visible support from our CEO and CXO who are present and engaged in Yammer. This has been the case since we first began using Yammer 4 years ago. Our CEO Craig Scroggie created, and runs a community called ‘CEO – Ask Me Anything’ where anyone can ask a question that he will personally answer.

Even the big corporates can leverage the value of Yammer through leadership. Steve Nguyen, Principal Program Manager with Yammer, speaks admirably about the tremendous ANZ (Australian Bank) have achieved with Yammer.

"I think they have a great culture from a leadership perspective with respect to how they engage and how they are curious... that's strong and it's somewhat unique not all organisations have that level of leadership engagement."

ANZ work hard to build community through leadership as they experience the value that allows them to connect their people and amplify company culture.

You can build leadership with Yammer by: 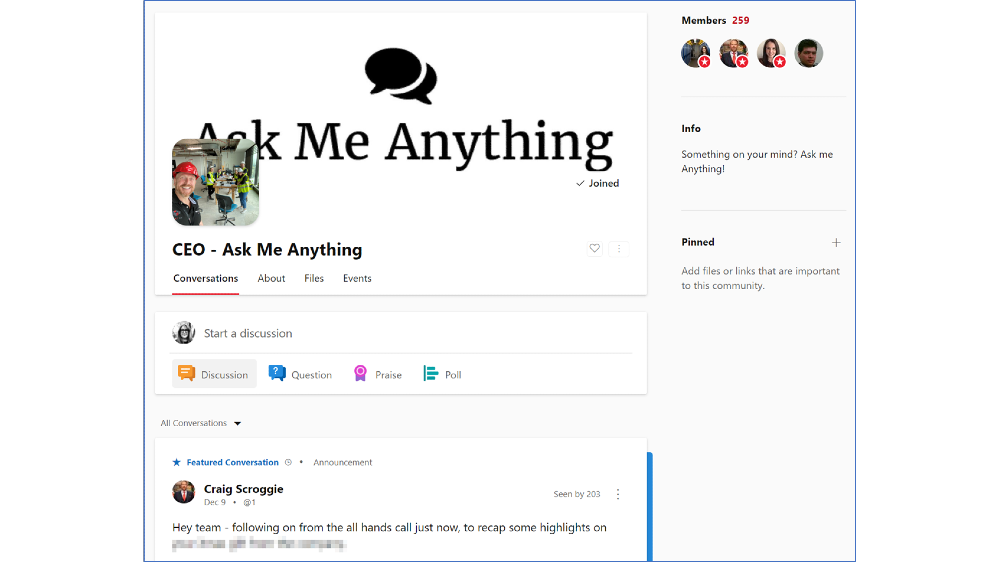 Image: NEXTDC’s ‘CEO – Ask Me Anything’ community in Yammer

Inclusion is part of Yammers DNA. It was built as a platform anyone could start and nurture, and still today anyone can have a voice on Yammer.

The team are taking that even further by introducing features that will help everyone feel like they have a home on Yammer. You asked and the product team listened, as Angus Florance, Product Marketing Manager, shared:

"At MVP summit a few years ago we got a lot of feedback that Yammer felt a bit corporate, it's supposed to be a social network. It should be fun it should be engaging it shouldn't feel like email."

You can foster inclusion in Yammer by:

Knowledge
Capturing tacit knowledge is absolutely a Yammer superpower. The focus is often on the "Knowledge Worker" but we see now many great features being introduced for "First-Line". This comes from a recognition that we are all knowledge workers who have different needs.

You can capture knowledge in Yammer by: 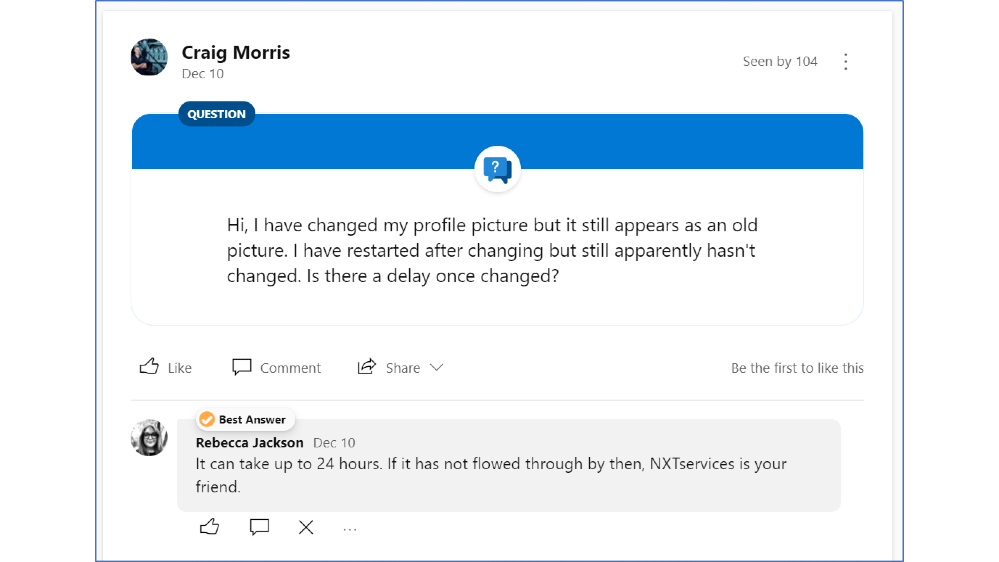 Community
A simple but profound change we have seen in the Year of Yammer is that 'groups' are now called 'communities'. With this product change, the purpose of Yammer becomes clear.

Build community in Yammer by: 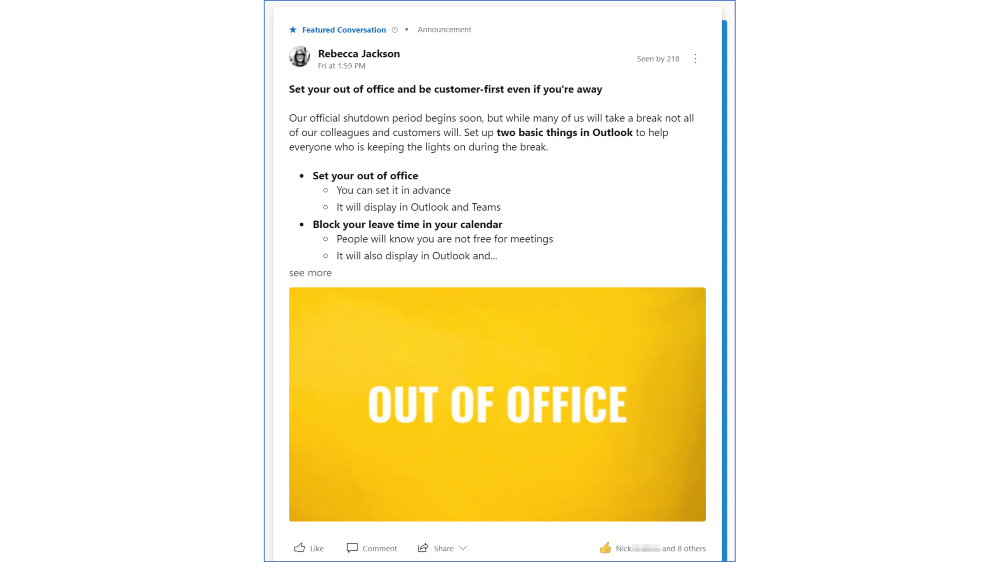 Scanning through the public Microsoft 365 Roadmap for Yammer, it is clear that there is a lot being shipped and a lot to come. But what is the broader direction, and as the #YearOfYammer finishes… what do we call 2021 for Yammer?

Head of Product and Analytics for Yammer, Jason Mayans asked the question on Twitter – What should the 2021 slogan for Yammer be?

Here are my ideas.

#YammerForKnowledge
I am excited for the possibilities for Yammer as Microsoft 365 generally moves deeper into using intelligence to build business knowledge. Particularly around search.

Steve Nguyen pointed out that,

"Customers that have been using Yammer for 8-10 years now they will tell us that Yammer is the brain of their organization. And because the institutional knowledge has been stored up, I think Project Cortex is an opportunity to help extract that."

"I think you'll see us go a lot deeper in knowledge. So, both kind of natively in Yammer as well as integrated with a larger Project Cortex effort. There is so much knowledge there captured in Yammer through these conversations but there are so many more ways we can leverage it and make it valuable for the broader organisation"

So watch this space for Yammer and Cortex coming closer together.

#YammerForCommunity
We have seen great steps for community managers in the Year of Yammer, but what is next?

Further to what has already been delivered, Jason Mayans wants "to continue to make communities more engaging, help you find communities in easier ways, recognise people who contribute, welcome new members' as well as helping to enable larger and larger conversations."

More ways to grow and nurture your communities.

#YammerForAll
Improvements for everyone. Continuing to build Yammer as a tool for sharing, building culture, fostering diversity and inclusion. And, being inclusive in ways that mean people can access from anywhere in the way that they need.

As Jason Mayans put it, "we want to continue to drive all of these capabilities as capabilities of the suite available anywhere you need them and in the context that makes sense."

Do you have any Yammer predictions or desires? Share them in the comments below.

Big thanks to Jason Mayans, Steve Nguyen and Angus Florence who took the time to let me nerd out about Yammer with them, back at the beginning of the #YearOfYammer, when travel was a thing.

I'm Rebecca Jackson, a digital and visual communicator specialising in the digital workplace. I've been working with intranets, online communities and the digital workplace since 2009 and am a Microsoft Office Apps and Services MVP. I first began using Yammer around 2010 and have been a member and community manager of many Yammer networks since then. I work for NEXTDC as Digital Workplace Manager where I am the product owner of multiple Microsoft 365 tools including Yammer, Teams and SharePoint (where our Intranet lives). I enjoy learning and sharing by blogging, sketching, speaking and participating in industry events. It's an exciting opportunity to be a contributor to the Yammer blog and work collaboratively with other Yammer practitioners. 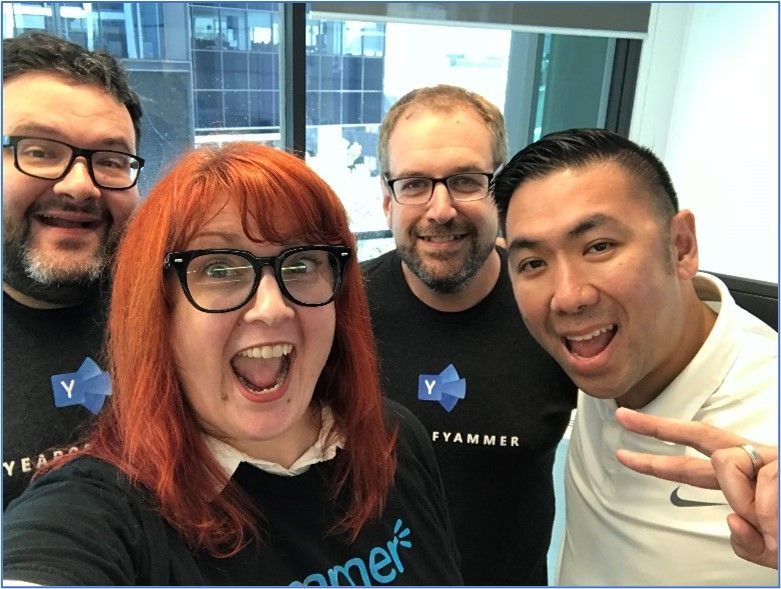