I have a couple of problems with Microsoft Word 2007.  I am aware that this is a superseded version which is no longer supported by Microsoft.  I have been retired from office life for twenty years, and have been happy to continue with the functionality of Word 2007, which I used extensively during my working life.  I would like to continue to use it:  I purchased it legitimately, it has enabled me to work successfully, and I have been satisfied with it.

I worked in a voluntary basis in preparing the text and photographs for a 400 page book (B5 page-size) in 2016, which was printed by a commercial printing company in 2016.  I included many photographs with captions, which were inserted in text boxes, and I saved the whole book as a PDF file, as required by the printing company.

The other problem concerns the placement of photographs.  I am still able to insert text boxes into the positions where they are required, and enter captions / text into them.  When a picture / photograph is inserted into the text box, a “frame” appears where the picture should appear, but the image does not appear inside of that frame.

These two problems did not occur when I was preparing that 400 page book in 2016.  The only possible reason which I can think of, which may be a contributor to the problem, is that I now use Windows 10, whereas I had previously been using Windows 2007.  Apart from the problems about which I am seeking assistance, Word 2007 seems to have the same functionality under Window 10, as I had previously used.

Any assistance will be gratefully received.

As far as the pdf issue is concerned, you should be able to download the save as pdf add-on for Office 2007 from:
https://filehippo.com/download_2007-microsoft-office-add-in-microsoft-save-as-pdf-or-xps/
An alternative is to use one of the free, very capable, pdf printers such as PrimoPDF.
As far as the pictures are concerned I would suggest making use of a table if necessary rather than text boxes, however, if the images are inserted with the layout set to In-line with Text, that may not be required.
How are you wanting to layout the pictures?
0 Likes
Reply

Thank you, Doug Robbins, for your reply.

I have been able to download and install the PDF app, to create a PDF file.  Thank you, and that is one problem solved.  However the other problem, concerning insertion of photographs, still remains.

I did a little experimenting, following your suggestion to use a one-cell-table, but this has not overcome the problem.  As I indicated in my first enquiry, I have had a great deal of experience with insertion of photographs inside text boxes.  One of the significant benefits of using a text box to hold a photograph is that it is then very easy to place a caption under the photograph, resulting in the “photo-with-caption” being separate from the surrounding text.

I will try to explain exactly what happens on my computer when I try to insert a photo in a text box.

With the cursor inside the text box, I then select the “Insert” tab in the toolbar, and this then allows me to specify the kind of object I wish to insert, from a selection of icons just below the toolbar.  When I select the “Picture” icon, a separate window opens (very much like the file-explorer window), and then I am able to select the required photo.  After the required photo has been selected, a new “picture frame” appears inside the text box, which should include the required image, but no image appears in this picture frame, but the picture frame has 8 sensitive spots which enable the photo “picture frame” to be stretched to the required size inside the text box.  Positioning the cursor on any of these spots does not cause the picture to appear, nor does a left-click of the mouse cause the image to appear.  HOWEVER, if the left mouse button is clicked and held down on one of these sensitive spots, AND THEN THE CURSOR IS MOVED, the image appears, but the image immediately disappears when the left mouse button is released.

I know that this is a bit of a long-winded explanation, but I wish to give a clear indication of the problem which I have.  As indicated in my first enquiry, I cannot think of any reason why this problem should have arisen, other than possibly because I am now using Windows 10.

I find it interesting that Microsoft Publisher 2007 allows pictures to be inserted successfully.  Even so, I wish to use Microsoft Word to complete the project I have undertaken, which requires insertion of photos into the story.

How are you wanting to layout the pictures?
I would suggest that you simply insert them into the body of the document and set the layout so that they are In line with text, in which case the picture is inserted into a separate paragraph, which can be formatted to be kept together with the next paragraph into which you insert the caption. In that way, the picture and the caption will always be kept together.
0 Likes
Reply

Thank you Doug for a very quick response. I have tried your suggestion of just inserting a photo directly into the text document, rather than into a text box, but that has not been successful and the problem remains.
It is easy enough to specify where I want the photo to be placed – whether into a table-cell, or a text box, or directly into the text. It is also easy enough to specify an individual photo which shall be inserted. The problem is that the required image does not appear in the document as required.
Based on my previous experience I still wish to use text boxes, because these offer a very convenient method for controlling the exact placement of photos on a printed page.
In each scenario the image can be made to become visible (but only briefly) in the document while a sensitive spot of the “picture frame” is being dragged by the mouse, but as soon as the mouse button is released the image disappears.
Do you think that it might be a “Windows 10” problem? Can you think of any other possible cause for this problem?
I am trying to create a PDF file which can be submitted to a printing company which specializes in low-volume book printing. The book I wish to publish is an autobiography of my wife’s one remaining Auntie, who is 97 years old. The book is anticipated to be about 220 pages, A5 size, with about 40,000 words and 40 photographs which shall be individually captioned.

Can you upload a copy of the file, or part of it so that we can investigate the problem.
0 Likes
Reply

Thank you Doug for your suggestion that I upload a copy of a text document. I would like to create such a document which will allow you to investigate. I would propose to include each method you have suggested for inclusion of a photograph, as well as in a text box, i.e.:
1. Insert a photo in a table cell
2. Insert a photo directly into the document
3. Insert a photo into a text box (my preferred method).
The photos I wish to insert are in “.jpg” format. I would be happy to supply a test document which contains all three scenarios, or to supply three separate test documents, with only one scenario in each document. I presume that you wish for me to supply files in “filename.docx” format.
Do you perhaps wish for me to supply files in “filename.pdf” format as well?
Shall I supply just one file? – or would you prefer a separate file for each scenario?
In your reply you said, “Can you upload a copy of the file, or part of it so that we can investigate the problem”. I am not aware of how I can upload a document to this forum. If I had an email address for you, I would be able to attach the necessary test file(s). Please advise the method you wish for me to use.
Thank you again, for the assistance you are offering.

@Wilfred180 After clicking on Reply, if you click on the Open full text editor link

you will then see the following dialog that has a facility for uploading files.  Alternatively, you can send a copy of the files to me at dougrobbinsmvp[at symbol]gmail[dot]com 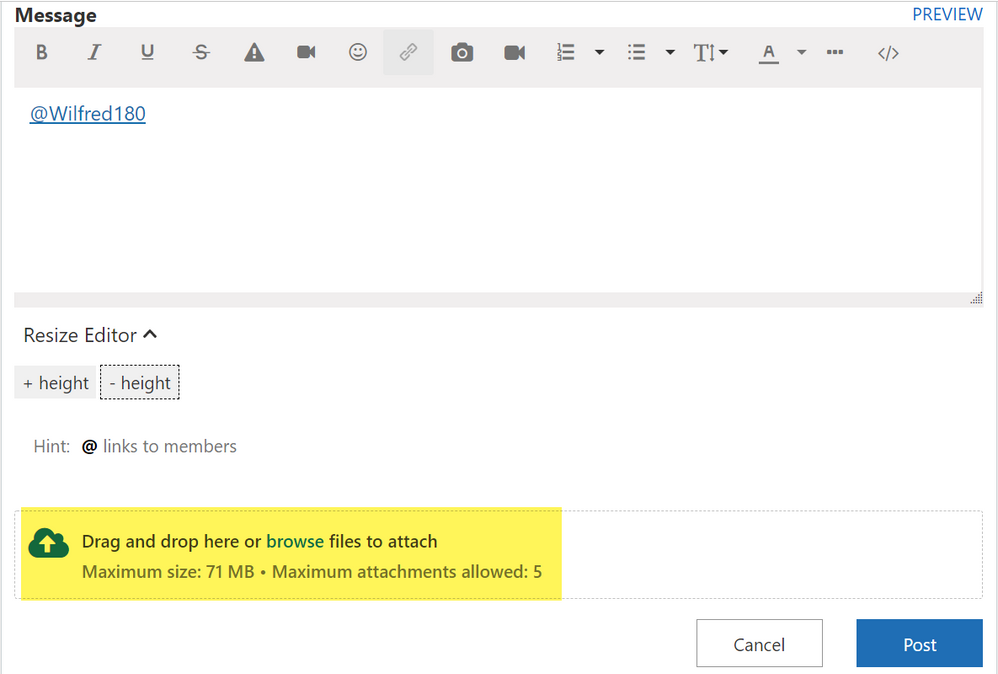 Thank You again for your response. I have sent an email to your email address, with three test documents attached.
0 Likes
Reply

I have just received an email from the Microsoft Tech Community, asking whether I have received an answer which solved my problem.
I wish to acknowledge with thanks that I have received answers to some of my questions, but not with regard to insertion of pictures. I did speculate as to whether the problems may have been caused when I installed Windows 10. The two problems I asked about in my initial enquiry did not exist for me before I installed Windows 10. I appreciate that I now have PDF functionality, following the advice I received in the first reply to my enquiry.
After the suggestion that I upload a copy of a file, I responded by sending three separate files to the email address which had been offered by Doug Robbins. These files attempted to load pictures in three different scenarios: (1) inserting picture directly into a document, (2) inserting into a table cell, and (3) inserting into a text box. In each scenario I experienced the problem that the inserted picture was not visible except when it was being stretched or shrunk.
The response I received said that the pictures were visible in Word 2003, Word 2010 , Word 2021, and Word in Microsoft 365. I responded by noting that Word 2007 was not included in that list.
I had previously been able to use text boxes very effectively (prior to using Windows 10) for my requirements, and would appreciate advice on how this functionality might be restored. I do acknowledge that the PDF files I have saved do show the pictures which I inserted in the text boxes in my Word 7 “filename.docx” files. However this feels like only small comfort, considering the inconvenience of inserted pictures not being visible in the originating Word documents.