I have a written a 50 page document.  The wide margin on the right seemingly appeared out of nowhere.  I have tried and tried to get rid of it.

How do I get rid of it? Does anybody know?

I have attached a file to show what I mean.

Your screen shot suggests that Word is displaying the so-called Markup area, which will display if the document contains revisions and/or comments that are shown in balloons on the right-hand side of the document. If you rest the mouser pointer on the area on the far right, you should see a screen tip that displays "Markup area":

To permanently get rid of the area, accept all changes and remove all comments.

If you want to hide revisions/comments temporarily, you can do so via the Review tab. 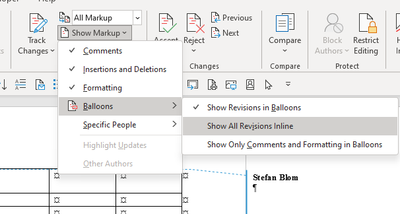 Stefan, I cannot tell you how thankful I am for your advice.  I thought it was something simple but I just could not solve it.  Many many thanks. Lesley.

I'm glad I could help. Thanks for the feedback. :)