how do I permanently remove CSP style buttons in Word doc

how do I permanently remove CSP style buttons in Word doc

When I send a Word docx to this particular client that has been formatted using Heading 1, Normal, etc. style buttons, it comes back to me with CSP - Heading 1, CSP - Normal, etc. style buttons that have changed all of my formatting work, undoing it. He and I have the same operating system and version/build version of Word. All he has to do is open, save, and send it back, and this happens. Thinking a user setting? What the heck is a CSP - style? 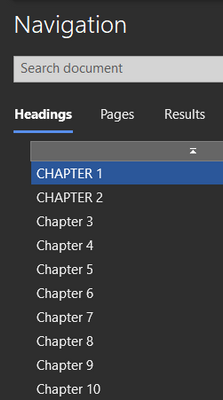 Then looked like this when he sent it back:

You are looking at two separate, if related, features, the Navigation Pane and the Quick Styles Gallery.

What shows in the Navigation Pane are paragraphs in styles that have an Outline level.

Outlining - Use the Navigation Pane

The CSP styles are custom styles and would not be inserted by opening and closing unless there is a third-party program or Add-In working on that system. They are not native to Word.

Their presence or absence in the Quick Styles Gallery is a style setting. They may or may not be present in the document when you send it, just not marked for inclusion in the Gallery. (Word has a multiplicity of styles, most of which are not in the gallery.)

Make sure your document is not set up to update styles from the template. What happens when I send my document to someone else? Will Word mess up my formatting? That could explain what you are seeing if the styles are already in the document. You can view the styles in your document by looking at the Styles Pane set to display all styles in alphabetical order.

Thank you. The two different features were shown to illustrate the changes that happened in the document. The proper style buttons affect the navigation/table of contents view as intended and the mysteriously appearing all on their CSP styles were changing all of that. Obviously, two different features, but for illustration, seeing both helped show what these CSP styles were causing. You touched on the issue, that something that doesn't belong, isn't native to Word, had crept in on us, but the issue really was how did that happen and how do I prevent it from happening again because while I know how to fix it, it's just going to reappear when the document owner opens it again if those two questions aren't addressed. The information you provided didn't address that, only showed me resources and information I already knew.

I finally got someone from Microsoft support on the case and we determined that it was a setting on the other party's end that originated with a template he got from a writer's group, and he accidentally saved it as his global template, thus making it the base of all his Word documents. We updated his normal template, and this solved the problem of it recurring every time I cleaned it up again. So the issue was an altered Word program template that had to be replaced with the default template.

Thank you for your time.

This issue is resolved and requires no further activity.
0 Likes
Reply