Just getting involved with Insider Preview...upgraded 2019 Datacenter (latest official release) to 20262. After the upgrade, downloaded and ran the Linux Kernel update package. When running WSL commands from the command-line, almost every command I run returns the same output that wsl --help enumerates. If I run wsl --set-default-version 2, it enumerates the help context. Did I miss a step to get this to work or is this a known bug?

I see, but there wasn't any new LTSC version of server released since WS2019 (1809), so it is clear that WSL2 was released only in the SAC.

AFAIK the WS2022 is being developed in the same cycle as the Windows 10 and Windows Server 21H2.

If that is true, there is quite a big chance WSL2 will be part of the WS2022, when released.

Well, unless the product team decides to remove it, not include it or simply not support it.

If nothing goes wrong the WS2022 will be here in few months, so there isn't much time left for the decision to be made.

@Mary Hoffman Is it possible to extend the life of the last WSL2 release (20241) until it returns to the releases?

@Mary HoffmanWe need a proper desktop environment, and CUDA support on a command line (e.g. for tensorflow or Docker or other Linux command line applications that need GPU acceleration). So we need WSL2. Strangely, Microsoft offers this option on Windows 10 but not Windows Server. (At the same time, Windows 10 and Windows 10 Pro for Workstation do not allow multiple users to logon simultaneously, so we cannot use them). There was a glimmer of hope with WSL2 support in the early vNext versions of Windows Server 2022, so we started using it, tolerating all the bugs. Now, Microsoft appears to be dropping the ball again, by dropping WSL2 support from Windows Server LTSC entirely... I am not sure why such strange decisions are being made. If we want multiple users + a desktop environment + CUDA on a command line, we are out of luck. Microsoft is leaving us without any option here, other than a full Linux desktop.

IMHO it could be technically possible to release a patch of the Microsoft-Windows-Security-SPP-Component, where AFAIK the timebomb lives, specifically for this build, but don't put much hope on MS doing it.
To be honest I would be happier if they would rather fix it for the builds coming.

TBH just want a working version. Backported or new version with it fixed or instructions to unbreak it.
0 Likes
Reply

I don't think this is quite right. WSL(1) was indeed available in Windows Server 2019 LTSC and I was able to use it perfectly fine. WSL2 on the other hand wasn't, because it simply did not exist back then yet.

I had opened a GitHub issue about this a while ago: WSL 2 broken on Windows Server Preview (since change to fe_release branch) · Issue #6301 · microsoft...

Any news on if WSL2 is in this new preview of Windows Server 2022?

It isn't possible to run the command

@LubomirH would be nice if someone at MS just explained the situation. i.e. we don't plan to introduce until after GA or its still being planned or its unsupported at the moment but you can fudge it by X etc.

@LubomirH I can verify that build 20313 it is still broken.  I landed here trying to figure out what had gone wrong and what the triage was.  I'm in the same boat as you as my working WSL2 compatible version expired on 1/31 and now won't start up.

This is frustrating as all get out.

If anybody hoped it is fixed in the build 20324, rest assured it isn't.

still just outputs the same as the command bellow

and doesn't switch to mode 2

Do you mean WSL1 or WSL2 here? WSL2 didn't exist at the time of Windows Server 2019, so that can't be the rationale, and WSL1 is present in the Windows Server LTSC 2022 Insider builds, right now.

Are you suggesting that WSL will be completely pulled (i.e. WSL1 as well) from Windows Server LTSC 2022 before release?

It seems odd that we would get WSL1 but not WSL2 in Windows Server LTSC 2022, since AFAIK all development effects and new features have been focussed on WSL2 for the last year or two.
0 Likes
Reply

@TBBle
I agree.
We do have a need of WSL2 on Server2022. IE a server with GUI and WSL2 and a decent support lifecycle 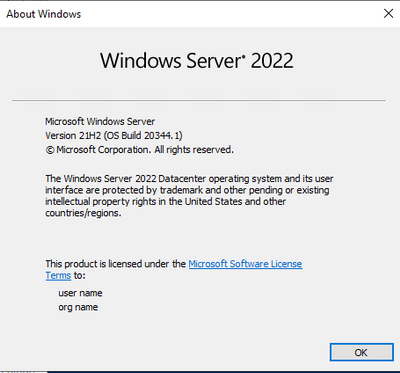 In this Build is not working wsdl2. 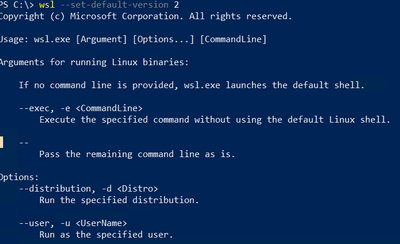