Server Manager Does Not See The LUNs 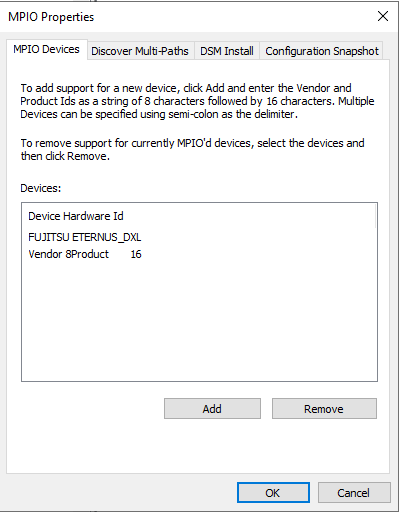 Disk Manager Does Not See The LUNs

Hi Everyone and Happy New Year.

I am having an issue where my Windows Server 2019 box is not seeing any of the provisioned FC LUNs in Disk Manager or Server Manager (Server Manager\File and Storage Services\Volumes\Disks).  However, I can see that the LUNs are connected to the Fiber Ports via the Qlogic Qconverge utility.  I bring this up in this room because if the Qlogic card sees the LUNs and Windows does not, I think the issue is with Windows (correct me if I'm wrong).

I am building a Veeam Backup Server.  So far I installed Windows Server 2019 Standard on an HP DL360Gen10Plus with the HPE SN1100Q (Qlogic part#QLE2692).  Our Storage switches are clustered Brocade G620s.  The storage appliance we have is a Fujitsu AF250 S2.  I have not installed any software other than Windows Server 2019 because I want to ensure that the LUNs are visible to the OS before installing Veeam.   I am not using iSCSI, just FC and a mirrored pair of local disks

Like I said earlier, Qconverge shows me that all the LUNs are connected to the SN1100Q on both FC ports, but Windows Disk Manager and Server Manager does not show the LUNs.  I tried the following:

1. Enabled MPIO and added "FUJITSU ETERNUS_DXL" to the list.

2. I reviewed the event logs but did not find any FC related logs.  There must be somewhere but I havent found anything on google saying which logs and where they might be

I added some screenshots of Disk Manager, Server Manager, Qconverge and the MPIO settings.  (I wrote the caption wrong for the MPIO screen, so please disregard.)

1. Where can I view event logs that pertain to FC issues?

2. One thing I noticed is that the Qconverge utility lists the LUNs as "Online".  Normally these LUNs should be offline (as they should be because they are VMWare Datastore LUNs).  I have several other Veeam Servers (running Server 2016) where these LUNs appear as offline.  Anyone think this is the issue and if so, what can I do to resolve it?

3. Does anyone have an idea whats going on here?