I am configuring a DNS Server on Windows Server 2022 Datacenter (in a test lab environment) and I want to change (resolve) the "Unknown" status with the right IP address.
Is there a PowerShell command (including .NET API) or CMD commands to use in order to accomplish what the "Resolve" button does?

Based on your screenshots and question, there's a couple of points that need to be made here.

A common oversight from many administrators is that they do not create the reverse lookup zone meaning PTR records fail to register.

You also want to check the network interface on the domain controller and verify that it is pointing to itself for DNS.

For example, if I have a network interface on the domain controller named "Ethernet" with an IPv4 address of 192.168.1.1, then I want to ensure that the primary DNS server on that interface is also set to 192.168.1.1.

Similarly, within the DNS management console, if you go to Server -> Properties, you want to ensure that under the "Listeners" tab, all the IP addresses are registered to listen on (unless there's a compelling reason for some to remain unregistered.)

Here's some example screenshots to help with the above descriptions. 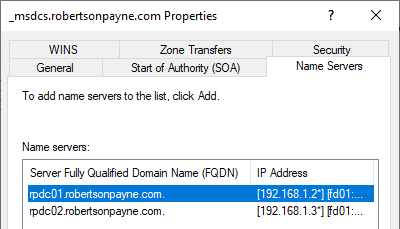 DNS Server configured to listen on all addresses 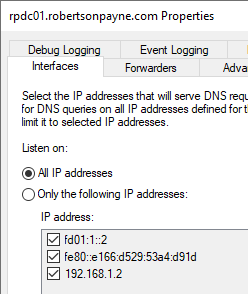 The DNS client addresses used on the domain controller (i.e. pointing to itself first, plus one other in my case)

If the necessary forward and reverse zones exist, and your domain controller is able to properly register its own A and PTR records within those zones, you should not be seeing "Unknown" in your first screenshot. The "resolve" button isn't the answer to root cause of this issue.

Hi, Lain. Thank you for your detailed answer. Nice post :)

_msdcs, known as "Microsoft Domain Controller Service" contains srv records and is used for locating domain controller for their services. It contains generic srv records, ldap records, etc. If it's not configured properly, unexpected things will appear; you know what I mean. :)

To replicate my case, use the following in a clean install OS: Windows Server 2022 Datacenter.

Before continue with the manual steps, check the DNS Server settings to view the "Unknown" status, as in my initial post. 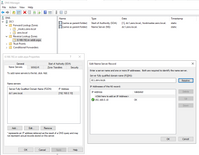 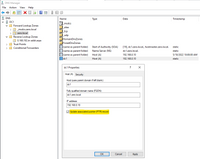 I still have the initial question. :)

With respect to your flow, under the "manual steps" section:

The DNS records within the _msdcs zone are managed dynamically by the NETLOGON service which is why you should not be making manual changes there. If that is not occurring then there is an underlying problem that needs resolving - manual manipulation is never the right way to fix DNS records in this zone.

You can control which record are registered via mechanics such as group policy (preferred option), registry entries and old-school DOS commands (both being less preferable options.)

Skipping to the forward and reverse zones (both of which support dynamic and require secure updates), a domain controller will manage its own A and PTR record registrations via the DNS Client service. There is precisely zero reason to manually check the "update PTR option". Even statically-assigned IP addresses automatically re-register every 24 hours.

The Resolve button doesn't achieve anything from a configuration perspective.

If the green tick icon isn't displaying then it's because reverse name resolution hasn't been completed, or the temporary scenario during setup where you still have a failed reverse lookup cached in the DNS client.

A quick way of cross-checking this is with a basic nslookup command such as:

At the top of the output, if you get "server: unknown" (example below) then you definitely still have a configuration issue. While there's a number of possible causes, the most likely for the workflow from below is that there's nothing saying to the server "re-register your DNS records" after the reverse lookup zone has been created - all those commands have already been done before the zone is created making it impossible for the server to have registered its PTR.

Once the server has automatically registered its PTR, and perhaps allowing a couple of minutes for any negative cached lookups to have expired (you can manually flush them if you want to), you'll find within the zone properties that the IP addresses are listed instead of "Unknown", which is the default experience when everything is configured correctly (i.e. the Resolve button isn't necessary.)

As a case in point, here's a screenshot of the DNS MMC automatically resolving my external ISP forwarders (the first one is done, the second in progress, which is what I wanted to show). I don't need to click Resolve at all. 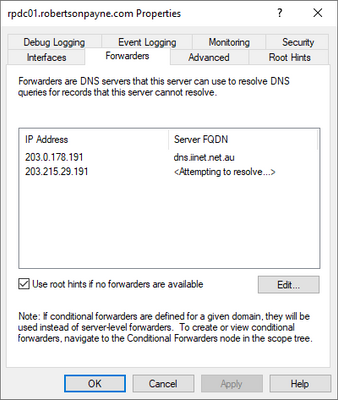 Edited to relocate an image.

If you will create a new Domain Controller (no internet access) based on my scripts, you will see why the manual steps are needed. Take a closer look.

My manual steps are not changing settings, they are only resolving names that are already in place.

The command you mentioned, "Register-DnsClient" will create a dynamic PTR, which is not right if my A record is static and I want it to remain static. The "Update associated pointer (PTR) record" is a better option because you only have to set it once and it will be configured for all A records.
Waiting for 24 hours to re-register a PTR is not an option and in the end, all PTRs will be dynamic even if I have static A records. (By default, Windows registers A and PTR resource records every 24 hours regardless of the computer's role. To change this time, add the DefaultRegistrationRefreshInterval (the interval is set in seconds) registry entry under the following registry subkey: HKEY_LOCAL_MACHINE\SYSTEM\CurrentControlSet\Services\TcpIp\Parameters)

My initial question is still open. :)