Turn on suggestions
Auto-suggest helps you quickly narrow down your search results by suggesting possible matches as you type.
Showing results for
Show  only  | Search instead for
Did you mean:
Case in the corner series: The crashing Add User Wizard
By

Case in the corner series: The crashing Add User Wizard

The symptoms for this case were that after a few seconds of launching the Add User Wizard, the wizard would crash, without any user input. 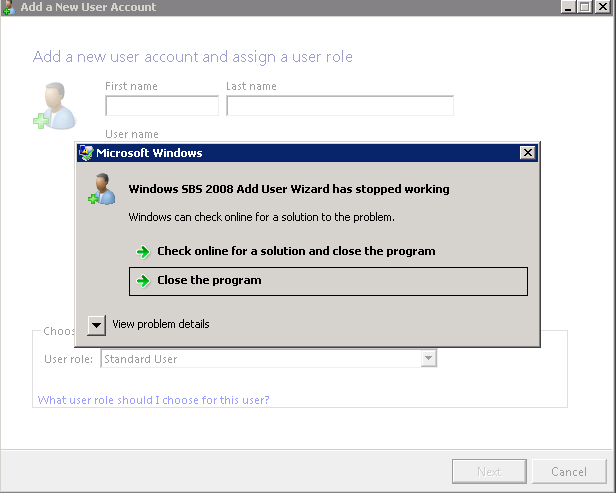 When we face a user mode crash like this we usually try to get our hands on the dump that is generated so we can review what triggered the crash. Depending on the crash, the associated wizard log might also contain valuable information (this was not the case here). Furthermore, we might also rely on tools such as Sysinternal’s Process Monitor .

For this case we launched the application within our Windows Debugger to see what was taking place, here is a summary of what we found and how we found it:

This was a very strange situation, the most likely cause was that the original Default Policy had been manually renamed to the Windows SBS Email Address Policy and a subsequent service pack for Exchange tried to recreate the missing Default Policy or it could have been as simple as some incorrect manipulation of AD objects..